As comprehensively documented in my latest book, Mirabilis: A Carnival of Cryptozoology and Unnatural History (2013), crocodilian mystery beasts come in all shapes and sizes and are of worldwide distribution. Yet few, surely, can be stranger than the giant limbless version reported from southern Asia as recently as 1980.

That was when Reverend Resham Poudal, an Indian missionary, was leading an entourage through a Himalayan jungle valley in Nepal. They came upon what seemed at first sight to be an enormous log, greenish-brown in colour, lying on the ground across their planned path – and then the 'log' moved! To the great alarm of everyone present, it proved to be a huge limbless reptile, whose scaly serpentine form blended in so well with the surrounding vegetation that when stationary, it did indeed look exactly like a log or fallen tree trunk.

Its eyewitnesses estimated the creature's total body length to be at least 42 ft, and approximately 6.5 ft in circumference, but most shocking of all were its jaws. For whereas those of true snakes, even massive ones, are relatively short in relation to their body, this mystery reptile's were extremely long, greatly resembling a crocodile's jaws. And although they were motionless, they were fully open, yielding a gape wide enough for a 6.5-ft-tall human to stand inside!

As I learnt from veteran cryptozoological explorer Bill Gibbons, who has also written about this bizarre cryptid, the entourage's native Nepalese members informed the Reverend that they considered these 'crocodile-snakes' to be dragons, but stated that they were only very occasionally encountered - and even when one was met with, it rarely moved. Instead, it would simply lie impassively with its monstrous jaws agape and wait for unsuspecting prey, usually water buffaloes, to approach, not seeing its enormous yet perfectly camouflaged form until it was too late. For as soon as a buffalo walked within range, the dragon's open jaws would seize it, and from those immensely powerful killing implements, brimming with sharp teeth, there would be no escape. In addition, the natives claimed that its eyes glowed like luminescent lamps at night (a feature also reported for anacondas and other very large snakes), which helped to lure prey.

But if such a remarkable creature as this truly exists, what could it be? Possibly an immense species of snake with unusually large jaws, or perhaps a gigantic legless lizard? Might it even be a unique limbless species of terrestrial crocodilian, highly specialised for this cryptic, motionless lifestyle? Whatever it is, it certainly does not match the appearance of any reptile currently known to science.

This ShukerNature blog post is excerpted from my newly-published book Mirabilis:A Carnival of Cryptozoology and Unnatural History (Anomalist Books: New York, 2013), which is available as a hard-copy paperback book and also as a Kindle e-book. 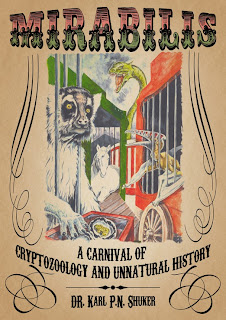