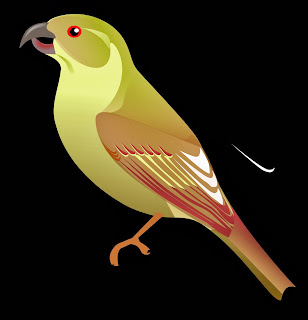 
There are a number of enigmatic species of bird that have fascinated me since childhood but regarding which I had only ever succeeded in uncovering the most scant of details prior to the coming of the internet, and for which I have now compensated by devoting entire ShukerNature blog posts to them. Click here, for example, to access my coverage of Madagascar's kinkimavo and the Bornean bristle-head; click here for the so-called Bourbon Island hoopoe, actually an extraordinary, now-extinct starling; and click here for the decidedly clamorous go-away-birds. Another one of these near-mystery birds is the Lanai hookbill, traditionally confined to the briefest of footnotes in Planet Earth's vast ornithological encyclopaedia. But no more. Here at last is a more detailed account worthy of this interesting, unusual, and engaging (but also very tragic) little bird.

The Hawaiian islands are home to a remarkable taxon of small, brightly-coloured finch-like birds (sometimes given separate family status) that are found nowhere else in the world. Known collectively as the drepanidids or Hawaiian honeycreepers, their 30-odd species sport such delightful native names as the iiwi, amakihi, anianiau, palila, ula-ai-hawane, and akiapolaau. They have attracted considerable ornithological interest on account of their wide diversity of beak shapes. Some species have short thin pointed beaks useful for catching insects, others have broad powerful beaks adept at splitting seeds and nuts, and still others have long curved slender beaks for dipping into flowers in search of nectar.

Tragically, however, many of these attractive little birds are now either extinct or gravely endangered, due to a lethal combination of avian diseases brought to the islands by non-native birds introduced by man, habitat destruction, predation by other introduced non-native creatures such as rats, and slaughter for their pretty feathers to be used in tribal decorations.

The iiwi Vestiaria coccinea – one of the most beautiful and also (thankfully!) still one of the more abundant (relatively speaking) of the Hawaiian honeycreepers, although even its numbers have declined sufficiently in recent times for it to be categorised nowadays as Vulnerable by the IUCN (© Jack Jeffery/American Bird Conservancy – click here for more details of this organisation's sterling work)

As a result, some honeycreepers are little-known, represented by only a few specimens and scant native information – but none more so than the Lanai hookbill. That is because this enigmatic species is known entirely from a single specimen and just two other sightings by the person who obtained that specimen.

On 22 February 1913, ornithologist George C. Munro spied an unfamiliar honeycreeper in the Kaiholena Valley on the small Hawaiian island of Lanai. The trusting little bird, predominantly yellow in colour but with darker wings, legs, nape, and top of head, plus a notably hooked parrot-like beak, chirped and flew to a spot near to him.

Sadly, however, as this was still a time when collecting specimens of birds for museums and private collections interested scientists far more than conserving them alive in their natural habitat, Munro promptly shot it, and after examining its corpse he realised that this bird did not correspond with any other honeycreeper species on record.

When it was formally described in 1919 by Hawaiian bird specialist Robert C.L. Perkins, he declared that it represented a new species (and genus), which he duly named Dysmorodrepanis munroi after Munro. Moreover, Munro claimed to have had two further sightings of birds fitting his shot specimen’s description (one on 16 March 1916, the other on 12 August 1918, both of them in Lanai's southwestern portion).

Even so, no additional example has ever been obtained; nor have any other sightings been reported since 1918. As most of its forest habitat on Lanai had been cut down and replaced by pineapple fields by 1940, however, the hookbill's absence here is little short of inevitable, especially when coupled with the introduction onto its island home of rats and cats, as well as avian diseases brought here by non-native bird species.

Nevertheless, for a long time the Lanai hookbill was brusquely dismissed by the ornithological world as either a beak-deformed, semi-albinistic female specimen of a superficially similar species of Hawaiian honeycreeper known as the ou Psittirostra psittacea (now critically endangered), or a rare hybrid of two separate Hawaiian honeycreeper species.

In June 1989, conversely, a very detailed reassessment of its unique, type specimen (preserved at the Bernice P. Bishop Museum in Honolulu) by ornithological researchers Drs Helen F, James, Richard L. Zusi, and Storrs L. Olson, published in the Wilson Ornithological Society's quarterly Wilson Bulletin, revealed that it was a genuine species after all. Certainly, its tongue and in particular its truly remarkable beak (whose mandibles yielded a noticeable gap even when closed, so that they resembled pincers, and may have been used for feeding upon snails) were very distinctive.

Tragically, however, with no sightings on record for many decades, the Lanai hookbill is unquestionably long-extinct - its belated scientific recognition having come far too late to save this fascinating little bird.

Beautiful illustration of the Lanai hookbill as featured in the Wilson Bulletin paper by James, Zusi, and Olson (© Nancy Payzant/Wilson Bulletin)

This ShukerNature article is dedicated with love to my late grandmother, Gertrude Timmins, whose birthday it is today; she passed away in 1994 at the very venerable age of 99. Nan always said how her mother had told her that just moments after she was born, the bells welcoming in the New Year began pealing all over town. Nan was my Mom's mom, and I know that they are together in Heaven with God, looking down on me now as I deal with the last few hours of 2013, after which I shall at last be rid of this accursed year that took Mom from me. God bless you Mom and Nan, and I pray that 2014 will be a better year.

All images here (and in all ShukerNature blog posts) are included on a strictly Fair Use non-commercial basis.