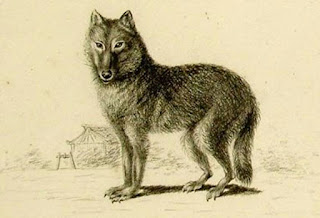 According to traditional mainstream zoology, the shamanu or Japanese dwarf wolf Canis lupus hodophilax was, as its names suggest, a noticeably small subspecies of grey wolf indigenous to Japan (specifically the islands of Honshu, Kyushu, and Shikoku, but not Hokkaido – where a second, much larger grey wolf subspecies, C. l. hattai, once existed instead) but not otherwise significant from an evolutionary standpoint, and was hunted into extinction in 1905.

During September 2018, however, some startling news emerged that very emphatically overturned the first of these two longstanding assumptions. 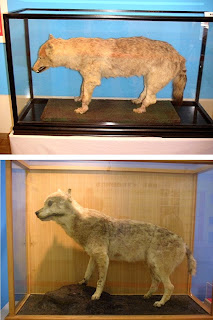 For that was when, during the International Symposium on Biomolecular Archaeology, held at Jena in Germany, graduate student Jonas Niemann from Denmark's University of Copenhagen revealed that after he and a team of fellow researchers had analysed the genome of a shamanu skeleton from London's Natural History Museum, they had made the startling, highly unexpected discovery that its DNA more closely resembled that of a long-extinct wolf that had lived in Siberia over 35,000 years ago than that of living Eurasian and American wolves, and that the shamanu therefore appeared to be a modern-day relic of an ancient, ostensibly long-vanished group of wolves that had once ranged across the Northern Hemisphere but had hitherto been deemed to have become extinct around 20,000 years ago.

As commented upon by paleogeneticist Mikkel Sinding from the Greenland Institute of Natural Resources in Nuuk, who had extracted the DNA from the shamanu skeleton, this remarkable disclosure could offer a new window on the evolution of wolves, as well as dogs. 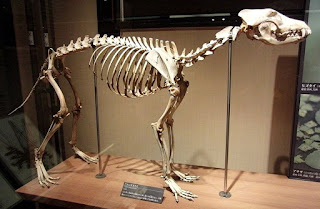 Suddenly, a long-held belief regarding the shamanu was no more. But this is not all. Might the second traditional shamanu tenet – that this veritable bonsai wolf became extinct in 1905 – also be disproved one day?

This is by no means impossible, because long after that fateful year, eyewitness reports of small, mysterious wolf-like creatures in various regions of Japan have continued to emerge, encouraging some investigators to become cautiously optimistic that the shamanu may indeed still persist. 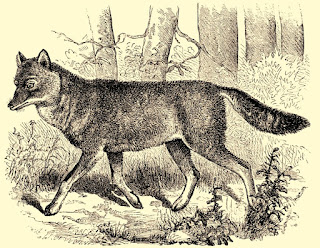 I first became aware of and interested in this exciting possibility back in the 1990s, and after researching it I penned an article on the subject, which was duly published in the July-August 1997 issue of the now long-defunct British bimonthly magazine All About Dogs (and contained a delightful colour drawing of a shamanu by Philippa Coxall (now Foster), who illustrated many magazine articles of mine during that decade). As this article may not have ever been seen by readers outside Europe, however, I am reprinting it herewith as a ShukerNature exclusive. Please click on each of its pages to expand it for reading purposes.

(NB – Since I wrote that article back in 1997, it has been shown that the Arab wolf C. l. arabs is slightly smaller on average than the shamanu, so the latter is no longer deemed to be the world's smallest subspecies of grey wolf; and the shamanu is no longer believed to have existed on Hokkaido; also, my article contains a misprint - the shamanu's height should be 55 cm, not 35 cm.) 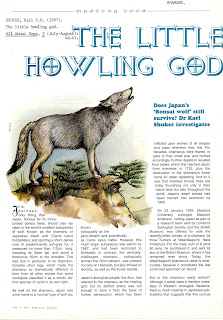 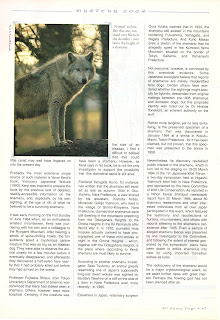 My All About Dogs article, of July-August 1997, concerning the possible survival of the shamanu (© Dr Karl Shuker)

My article attracted sufficient interest from readers to inspire me to continue researching this fascinating subject, and in my book The Beasts That Hide From Man (2003) I added some further, more recent information, which reads as follows:

In January 1997, a significant new piece of evidence for the shamanu's putative survival was publicised - a series of recent photographs depicting a dog-like beast that bears a startling similarity to a living shamanu. The photos were snapped on 14 October 1996 by 47-year-old Hiroshi Yagi in the mountain district of Chichibu. He had been driving a van along a forestry road that evening when a short-legged dog-like beast with a black-tipped tail suddenly appeared further down the road. A longstanding shamanu seeker, Yagi reached for his camera, but the animal vanished. After driving back and forth along the road in search of it, however, Yagi saw it again, and this time was able to take no fewer than 19 photos from just a few feet away. He even threw a rice cake towards it, hoping to tempt it closer still, but the creature turned away and disappeared into a forest. When the pictures were examined by eminent Japanese zoologist Prof. Imaizumi Yoshinori, he felt sure that the animal was indeed a shamanu.

In November 2000, Akira Nishida took a photo of a canine mystery beast on a mountain in Kyushu that was widely acclaimed afterwards as evidence of shamanu survival - until March 2001, that is. For that was when a sign appeared on a hut on Ogata Mountain claiming that the creature in the photo was nothing more than a Shikoku-region domestic dog that the hut's owner had been forced to abandon for private reasons. However, Yoshinori Izumi, a former head of the National Science Museum's animal research section, dismisses this claim as a hoax, and remains adamant that the photographed canid is a bona fide shamanu, even stating that the pattern of the creature's fur is completely different from that of Shikoku dogs. This is evidently a saga with many more chapters still to be written! 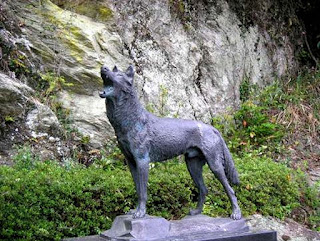 Japan's very poignant, official memorial statue to the shamanu, which stands by the banks of the Takami River in Higashiyoshino, Nara, and is a replica of the last confirmed individual killed by hunters nearby in 1905. Inscribed is the haiku: I walk/ With that wolf/ That is no more. (© Katuuya/Wikipedia – CC BY-SA 3.0 licence)

I have recently discovered online an extensive scientific paper analysing the photographs snapped by Hiroshi Yagi of the so-called Chichibu wild dog, as this mystery canid individual has since become known. Authored by him and Japanese scientist Masazumi Morita, and published by the Japanese journal Animate in 2015, its findings indicate that the creature may indeed have been a shamanu, as revealed by the paper's summary:

Nineteen photographs of an animal "Chichibu wild dog" were taken on 14th October 1996 at the Chichibu mountains. Four of photos that captured artificial structures on the same picture, were analyzed for determination of body, head and face sizes. The estimated sizes were similar to those of a specimen of the Japanese wolf, Canis hodophilax that went extinction in 1905. Based on the results, we applied the super-impose method between the photos of head or whole body and skeletal photos of C. hodophilax specimen. The results showed that the photographed animal approximated to C. hodophilax specimen with appearance, size and shape. It indicated that a canine animal similar to C. hodophilax was present in 1996.

I haven't read any reports of putative shamanu survival lately, but in view of this enigmatic little canid's elevated evolutionary significance and recent outing as a prehistoric survivor of sorts, perhaps it's time that I took up its case once more to search for and publicise any new sightings and accounts that may be on record.

So, watch this space! 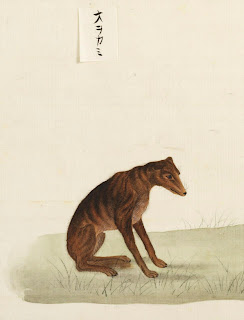 Finally: it is nothing if not ironic that perhaps the best known shamanu illustration may not actually portray a shamanu at all. In 1826, German botanist Philipp Franz von Siebold purchased two living canids. One was a genuine shamanu (and was unequivocally depicted by Carl Hubert de Villeneuve; his depiction of it opens this present ShukerNature article), the other was an adult female specimen of a strain of domestic dog familiar in Japan and referred to variously as the yamainu or mountain dog. He made detailed notes and sketches of the two animals, taking pains to delineate their morphological differences.

Notwithstanding this, however, when Dutch zoologist Coenraad Jacob Temminck subsequently consulted Siebold's notes while preparing his own documentation of the shamanu for his great work Fauna Japonica (1833), he somehow confused the two different canids, ultimately synonymising them as one and the same form. Consequently, there has been much controversy and conjecture ever since as to whether the shamanu illustration in his work does indeed depict a shamanu or whether it is instead based upon the mountain dog. Nevertheless, this image has been reproduced and presented as a bona fide shamanu representation in many later publications, making it the most (in)famous shamanu picture ever. 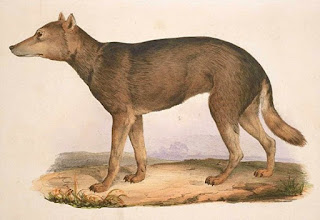