MOON CARROT MUSINGS AND MEMORIES - BUT NOT FORGETTING MOON-CALVES, MANDRAKES, AND A PARCEL THAT TALKS! 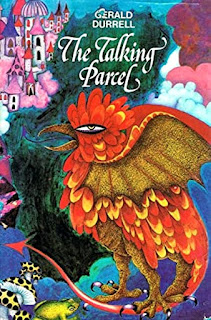 Moon carrots may not seem the most obvious choice of subject for a ShukerNature blog article, but there is good reason for my doing so, inasmuch as there is what I believe to be a hitherto-unrevealed link between these exotic-sounding plants and a noteworthy devotee of cryptozoology who featured them in a delightful children's novel replete with mythological creatures of many kinds. But to begin at the beginning…

The existence of moon carrots was first brought to my attention when, as a child, my grandad Ernest Timmins (my mother's father) bought for me as a Christmas present in 1968 (my ninth Christmas) an absolutely wonderful book entitled The Natural History of Europe. 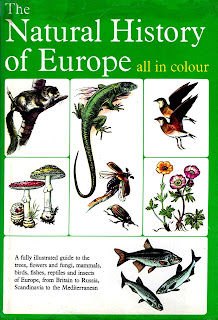 The Natural History of Europe – from countless readings of my much-loved copy of this book (containing a greatly-treasured handwritten message inside from Grandad, who passed away just a few years later), and which I still own today, its dustjacket was totally wrecked many years ago, but I was eventually able to buy a replacement for it, seen here (© Harry Garms/Wilhelm Eigener/Paul Hamlyn Publishing Group – reproduced on a strictly non-commercial Fair Use basis for educational/review purposes only)

My copy was the second impression (published in 1968) of the 1967 English-language version of a German book entitled Pflanzen und Tiere Europas ('European Plants and Animals') that had originally been published in 1962. Written by Harry Garms and brimming throughout with the most delightful full-colour illustrations by Wilhelm Eigener, this fascinating book documented a vast array of fauna and flora inhabiting Europe, many of which were entirely new to me at that tender age, so it was instrumental in teaching me an immense amount about this continent's wildlife. Its contents were divided up into several discrete habitat-themed sections: Woods and Forests; Heath, Moor and Tundra; Freshwater; Sea and Shore; Meadows and Pastureland; Field, Garden and Park; and Mountains.

One of the non-British plants documented and depicted on p. 182 in the Meadows and Pastureland section was the annual moon carrot Seseli annuum. Yet in spite of its imaginative English name, it turned out merely to be a species of herb, albeit one that is indeed taxonomically akin to the true carrot Daucus carota sativus by being a member of the same plant family, Apiaceae (the umbellifers), and similarly producing a conical taproot. (Moreover, a closely related species, Seseli sibirica [= sibiricum], known simply as the moon carrot but native to Britain this time, was included on p. 222 in the Field, Garden and Park section.) 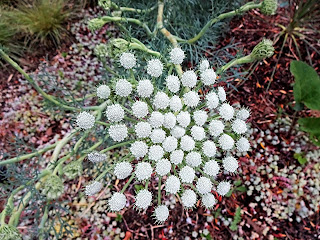 Moon carrot flowers – more than a hundred Seseli species are known, and many are referred to colloquially as moon carrots (© Andrey Zharkikh/Wikipedia – CC BY 2.0 licence)

Nevertheless, I was not the only person who was captivated by the moon carrot's memorable moniker. So too was the wildlife celebrity who had penned a foreword to this book – none other than Jersey Zoo founder, bestselling author, and longstanding cryptozoological enthusiast Gerald Durrell. Indeed, within his witty foreword can be found the following wonderful, inimitably Durrellesque lines, celebrating the fact that not only is this book an indispensable addition to the luggage of any keen naturalist visiting Europe but also:

…it is worth possessing for the sheer poetry that it contains. Who would mind an insect bite or two providing you were sure that they had been inflicted by the Spangle-winged Mosquito? Who, when swimming in the sea, would not be charmed to meet a fish called a Dentex (which sounds faintly like a new brand of toothpaste), or the Painted Comber (which must surely have some connection with mermaids)? But it is among the plants that the botanists have really let themselves run wild. Who would not stop, even on an autobahn, to get more closely acquainted with a Nodding Bur-marigold or Curtis's Mouse-ear or the Ramping Fumitory or even the Hawkweed Treacle-mustard? Who would not love to watch some worthy farmer gathering his crop of Annual Moon Carrot? 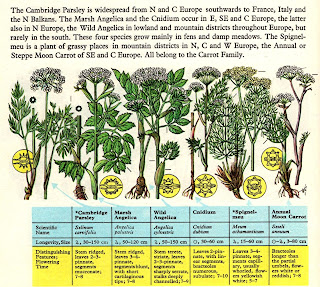 A portion of p. 182 from The Natural History of Europe that contains its description and depiction of the annual moon carrot – click to enlarge for reading purposes (© Harry Garms/Wilhelm Eigener/Paul Hamlyn Publishing Group – reproduced here on a strictly non-commercial Fair Use basis for educational/review purposes only)

It has been over 50 years since I first read those delightfully evocative words, but typing them here now it seems like only yesterday, as they made such a deep impression in my memory – and not only in mine. Fast-forward a decade, and by the end of the 1970s I had joyfully read every non-fiction book written up until then by Gerald Durrell himself, chronicling his numerous animal-collecting expeditions to all manner of far-flung tropical lands, his founding of Jersey Zoo, and of course his enchanting childhood as a passionate boy-naturalist growing up with his family (and other animals) on the idyllic Greek island of Corfu.

What I hadn't realized, however, was that he had also written some children's fantasy novels – until, when browsing through a bookshop one day during the early 1980s, I happened upon a paperback edition of one of them, entitled The Talking Parcel. The copy that I was looking at and duly purchased had been published in 1983 by Lions, of Fontana, and was the fifth impression of the Lions 1976 paperback edition. The original hardback edition, whose colourful dustjacket depicted a very imposing cockatrice in fiery finery (see this present ShukerNature blog article's opening picture), had been published two years earlier by Collins, in 1974 (and is now extremely collectable!). 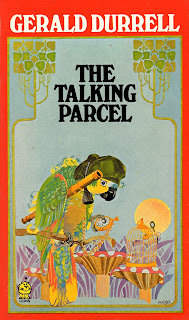 My Lions paperback edition of Gerald Durrell's novel The Talking Parcel (© Gerald Durrell/Lions, of Fontana – reproduced here on a strictly non-commercial Fair Use basis for educational/review purposes only)

Back home, I started reading my latest literary acquisition straight away, whose story concerns three children (Penelope, Simon, and Peter) who find a talking parcel on the beach, which when opened reveals inside a somewhat bossy parrot (named Parrot – or, as he prefers to be called, The Parrot), who takes them to the fantasy land of Mythologia in order to rescue its kindly old magician, H.H., from the clutches of the dreadful cockatrices. Needless to say, I was delighted to discover that its story features all manner of other mythological and even cryptozoological creatures too, including werewolves, mermaids, griffons, phoenixes, shrieking mandrake plants, Tabitha the last dragon, a sea serpent named Oswald, and even some delightful Durrell-created beasties known as moon-calves. These latter animals are giant dark-green snails with golden and green shells but the heads of mooing bull calves, whose shells bear Hot and Cold taps for releasing milk as well as a third one specifically for cream. But my greatest surprise and pleasure came from finding that The Talking Parcel contains numerous references to none other than moon carrots! However, these are no ordinary ones – for as explained on p. 88 of my paperback copy, they had been created by the afore-mentioned magician H.H., are striped red and white, and, when hung up to dry after having being gathered, reveal written inscriptions upon their outer surface that are instructions for preparing whatever delicious full-course meal they describe, using nothing more than the special powder contained inside them.

Bearing in mind that his novel The Talking Parcel was not published until 1974, whereas he had written his moon carrot-mentioning foreword for The Natural History of Europe some time prior to its publication in 1967, I think it very likely that the moon carrot's presence in the latter book had served as direct inspiration for Gerald Durrell (whose foreword for it revealed that he had clearly been entertained by this plant's name) to incorporate it within his subsequent novel, albeit in a now much-magicalised form. And if so, how happy I am that it did, elevating what had hitherto been an obscure, little-known plant outside botanical circles into a magical delight that has since charmed, and continues to charm, generations of children – as well as a fair few parents – and not only via his original novel. 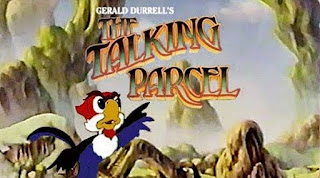 In 1978, an extremely prolific UK-based animation studio named Cosgrove Hall Films (after its founder animators Brian Cosgrove and Mark Hall, and famed for such still-popular, fondly-remembered children's TV shows as Danger Mouse, SuperTed, Chorlton and the Wheelies, The Wind on the Willows, and Count Duckula), released a 40-minute animated version of The Talking Parcel, adapted from Durrell's novel by Rosemary Anne Sisson and directed by Brian Cosgrove himself. Its beloved characters are voiced by some of Britain's most popular actors and actresses at that time, including Freddie Jones as Parrot, Windsor Davies as the bombastic Chief Cockatrice, Roy Kinnear as a shifty but ultimately loyal toad named Ethelred, Mollie Sugden as Hortense the French flying train, and Sir Michael Hordern as Oswald the sea serpent. Of the original three children in the novel, only Penelope appears in this cartoon version, but otherwise it adheres fairly closely to the novel's basic storyline. Moreover, in faithful homage to the novel's introductory chapter, it opens with a scene featuring Parrot inside the parcel singing two verses of a very catchy song entitled 'Moon Carrot Pie' (the novel contains additional verses).

The Talking Parcel animated movie has been screened (and watched by me) a number of times on the UK TV channel ITV down through the years, and it has also been officially released on both VHS videocassette and DVD (although I have yet to find a reasonably-priced one in either format to add to my collection of animated productions). If you'd like to view it right now, however, you can currently do so here, free of charge, on YouTube. And so, altogether now: 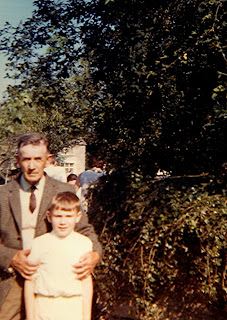