TRAILING THE MITLA – A DOG-LIKE CAT, OR A CAT-LIKE DOG?

Certain of South America's alleged mystery cats may in reality be of canine rather than feline identity. One of these ambiguous animals is the mitla, which was first brought to western attention by the famous lost explorer Colonel Percy Fawcett. In Exploration Fawcett (1953), while referring to the Madidi region of Bolivia, he noted:

"In the forests were various beasts still unfamiliar to zoologists, such as the mitla, which I have seen twice, a black doglike cat about the size of a foxhound."

American zoologist and cryptozoologist Ivan T. Sanderson claimed that during an animal collecting trip to South America, he had unsuccessfully attempted on several occasions to shoot one of these creatures, but had obtained a legless native skin of one, which he likened to that of a huge black serval with pricked ears and tiny lynx-like tail. Regrettably, however, he did not mention what happened to this cryptozoologically priceless skin afterwards.

In September 1965, Jersey Zoo director Jeremy Mallinson set off on a one-man, two-month-long expedition to Bolivia in search of the mystifying mitla, but did not uncover the secret of its identity:

"By the time we paddled our way across the confluence of the Abuna with the Madeira...I recognised that I had not thrown any further light on the question of whether Colonel Fawcett’s legendary animal had ever existed or not. Perhaps the mitla had been nothing more than a melanistic form of one of the several species of South American tiger cats or, as has been suggested, the black form of the jaguarundi which can grow to about the size of a foxhound and could, to a non-zoologist, appear to be half-dog, half-cat. Both Señor Carlos and Professor Gaston Bejarano had confirmed that the black form of the jaguarundi occasionally occurred in the north-eastern regions of Bolivia. However, I had learnt one important fact from my travels in this great integrated region of rivers and forests: that while these remoter areas of the Amazon basin still remain in existence, the forests could well harbour such animals as the mitla that are still strange to science, but it would only be by chance if their presence ever came to light."

Some reports may indeed involve dark individuals of the jaguarundi Puma yagouaroundi, or even a strange sometimes-black relative of weasels called the tayra Eira barbara. 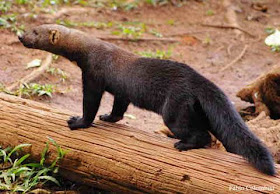 However, retired Chicago University biologist and spare-time cryptozoologist Dr Roy P. Mackal favours the South American bush dog Speothos venaticus as a likely identity – thus proposing that the mitla may not be a dog-like cat, but rather a cat-like dog. This species is a savage, pack-hunting canid, native to Guyana, Brazil, Paraguay, Bolivia, Peru, Colombia, and Panama. Having said that, however, the bush dog is reddish-brown in colour, not black, as described for the mitla (though juvenile bush dogs are indeed uniformly black). Moreover, it is relatively short-legged, not recalling the foxhound comparison given by Fawcett for the mitla.

In any case, if the mitla is truly a feline canid rather than a canine felid, in my view there is an even better candidate for it, as I first proposed in my book Mystery Cats of the World (1989). Namely, the small-eared dog Atelocynus microtis, also called the zorro. This little-known, dark-furred species has occasionally been exhibited in captivity, and is characterised by its remarkably gracile, feline gait - far-removed indeed from the more boisterous, less agile movements of most dogs.

Until recently, the zorro had not been reported from Bolivia itself, but was known to occur in various of Bolivia's neighbouring countries. And as it has never been well-studied in the wild, it would not be too surprising if the zorro were formally discovered in Bolivia too at some stage in the future - a prediction supported by this species' compelling correspondence to descriptions of the mitla.

And sure enough, a reliable observation of the zorro in northern Bolivia at 14°25'47.9994"S, 63°13' 47.9994"W by biologist R. Wallace has lately been recorded. This constitutes its species' most southerly record, in fact, and is in close proximity, moreover, to the Madidi where Fawcett reported the mitla – thereby enhancing the prospect that zorro and mitla are one and the same creature.

Early photograph of a captive zorro, exhibited at London Zoo in 1913

This ShukerNature blog post is an expanded, adapted excerpt from my latest book, Cats of Magic, Mythology, and Mystery (CFZ Press: Bideford, 2012).