LET'S ALL DO THE KUNGA!

It's always good to learn of a 'new' animal, even if it turns out to be one that actually existed four and a half millennia ago! And so, with no further ado, please welcome to ShukerNature the kunga.

Depicted in Mesopotamian art and referred to in cuneiform writings dating back 4500 years from the Fertile Crescent region of the Middle East, the long-vanished kunga was a powerful horse-like creature that was used as a draft animal to pull war wagons into battle and royal chariots during ceremonial parades. However, it has long been a puzzle to archaeologists and zoologists alike. 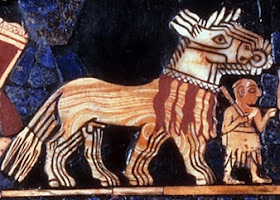 Close-up of a kunga, as depicted in a detail from 'War' panel of Standard of Ur mosaic, dating from c2600 BCE (© Agricolae/Wikipedia – CC BY-SA 3.0)

This is because the domestic horse Equus caballus was not introduced into this region until 4000 years ago, and the only known equine beasts that did exist there at the time of the kunga were the domestic donkey E. africanus asinus and the Syrian wild ass (aka the hemippe) E. hemionus hemippus, both of which were smaller and far less sturdy than the kunga. So what was it?

Unlike many mystery beasts, there are actually physical, tangible remains of the kunga in existence, because as it was such a valuable, useful work beast, specimens were sometimes buried alongside persons of high social status, with several kunga skeletons having been discovered at the northern Syrian burial complex of Umm el-Marra. Unfortunately, however, the bones of kungas, donkeys, wild asses, and horses as well as mules and other equine hybrids, all look very similar, so although kunga bones have been examined, no conclusive identification of what the kunga actually was has ever resulted – until earlier this year.

In January 2022, published research in the journal Science Advances revealed that DNA samples had been extracted from the bones of one buried kunga specimen from Umm el-Marra and subjected to comparative sequencing analyses with other equine forms. These analyses confirmed that it was a hybrid – most probably the offspring of an interspecific mating between a male Syrian wild ass and a female domestic donkey.

Moreover, because such matings would not occur naturally, and as the kunga, being a hybrid, was almost certainly sterile (just like the mule), male wild asses would need to have been deliberately captured and mated with female domestic donkeys on a regular basis in order to perpetuate the kunga strain 4500 years ago in the Fertile Crescent – thereby making the kunga the earliest recorded human-engineered hybrid. But when the horse was introduced here 500 years later, the kunga was no longer needed, so the breeding of it ceased, and this remarkable creature duly vanished from existence.

Of course, one could ask why, now that the kunga's precise hybrid nature is finally known, scientists are not excitedly proclaiming "Let's all do the kunga – let's resurrect it!", by once again mating male Syrian wild asses with female domestic donkeys. The answer is as tragic as it is simple – no such restoration can take place because the kunga's paternal progenitor, the Syrian wild ass, is itself now extinct, as a result of over-hunting, with the last two known specimens both dying in 1927.

So unless the kunga and/or the Syrian wild ass can be recreated via genetic means in the laboratory one day, the kunga is doomed forever to remain nothing more vital than a collection of long-buried bones, a few brief mentions in cuneiform script, and some preserved images in ancient art. RIP.

A trio of poignant photographs depicting one of the world's last known Syrian wild asses, a specimen living at Vienna's Tiergarten Schönbrunn in 1915, plus one photograph (at bottom of photo-column) of a Syrian wild ass at London Zoo in 1872 (public domain)
Dr Karl Shuker at 00:42
Share