THE ZEBRO - AN EQUINE MYSTERY FROM IBERIA

During the Middle Ages and the Renaissance, several Spanish hunting treatises alluded to a mysterious, now-vanished equine creature known as the zebro (or encebro, in Aragon), living wild in the Iberian Peninsula. In one of these works, it was described as “an animal resembling a mare, of grey colour with a black band running along the spine and a dark muzzle". Others likened it to a donkey but louder, stronger, and much faster, with a notable temper, and whose hair was streaked with grey and white on its back and legs. What could it have been?

Although largely forgotten nowadays, the zebro experienced a brief revival of interest from science in 1992. That was when archaeologists Carlos Nores and Corina von Lettow-Vorbeck Liesau published a very thought-provoking article in the Spanish scientific magazine Archaeofauna, in which they boldly proposed that the zebro may have been one and the same as an equally enigmatic fossil species – Equus hydruntinus, the European wild ass.

The precise taxonomic affinities of this latter equid have yet to be satisfactorily resolved, for although genetic and morphological analyses suggest that it was very closely related to the onager E. hemionus, one of several species of Asiatic wild ass, it can apparently be differentiated from these and also from African wild asses by way of its distinctive molars and its relatively short nares (nasal passages). Arising during the mid-Pleistocene epoch, approximately 300,000 years Before Present, the European wild ass persisted into the early Holocene before finally becoming extinct. During the late Pleistocene, its zoogeographical distribution in western Eurasia stretched from Iran in the Middle East into much of Europe, reaching as far north as Germany, and it was particularly abundant along the Mediterranean, with fossil remains having been recovered from Turkey, Sicily, Spain, Portugal, and France.

According to Nores and Liesau, moreover, this species may have survived in southernmost Spain and certain remote parts of Portugal until as late as the 16th Century (they consider its disappearance to represent the Iberian Peninsula’s last megafaunal extinction), where, they suggest, it became known locally as the zebro. More recently, their theory gained support from the discovery of E. hydruntinus remains at Cerro de la Virgen, Granada, dating from as late as the 9th Century. 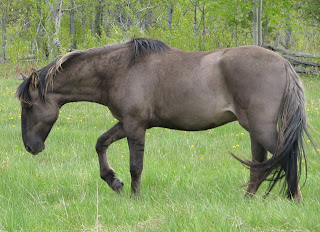 Some researchers have also suggested that before dying out, the zebro gave rise at least in part to a primitive, nowadays-endangered Iberian breed of donkey-like domestic horse called the sorraia (which was once itself referred to as the zebro). Furthermore, many believe that it was from the term ‘zebro’ that ‘zebra’ originated as the almost universally-used common name for Africa’s familiar striped equids.

Even today, many Iberian place-names still exist in which the mysterious but now-obscure zebro’s name is preserved. These include Ribeira do Zebro in Portugal; and Valdencebro (in Teruel), Cebreros (Ávila), Encebras (Alicante), and Las Encebras (Murcia) in Spain.

A partbred grullo Sorraia colt exhibiting zebra type stripes formed by the lay pattern of the newborn foal hair coat. The dorsal and leg stripes remain, but the lay pattern stripes disappears after several days or weeks when the hair is fully fluffed (Selona/Wikipedia)

This ShukerNature blog post was originally published as an article in issue #1 of Flying Snake.