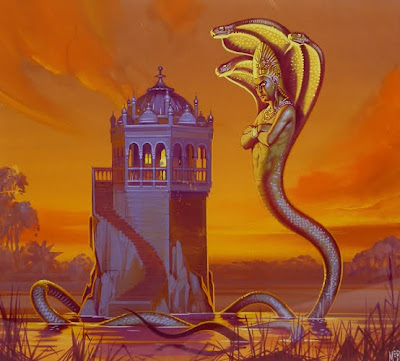 Scottish cryptozoologist Alan Pringle has brought to my attention a very intriguing mystery of the cryptozoologically-related kind. Back in 1970 or 1971, at a friend's home, he saw a complete set of a magazine partwork series containing at least 30-40 issues, on an encyclopaedic or scientific theme (possibly aimed at children), and entitled Finding Out.
However, it was not their contents, but their covers, that attracted his particular interest and attention, because each issue's back cover featured an animal or entity from the myths and legends of the world, including a number that have cryptozoological relevance. A very dramatic, full-colour illustration of the creature occupied one half of the cover's page, with accompanying text occupying the other half.
The creatures that Alan can definitely remember appearing in this set of covers included the western dragon, eastern dragon, siren, tokoloshe, leshy, thunderbird, Midgard serpent, Assyrian winged bull, minotaur, centaur, bunyip, Egyptian ammut (soul eater), sphinx, and harpy. Others that he thinks may have been present include the werewolf, vampire, unicorn, cyclops, zombie, and banshee.
Alan has never seen this partwork again (and has long since lost contact with the friend who owned it), but he can still vividly recall some of the back covers due to their very eyecatching nature. I have certainly never seen them, and despite their dramatic appeal they do not seem to have been reproduced in any other publication. Moreover, in a letter to me from Phil Hide of Aylesbury, I learned that he actually owns most issues of this partwork up to volume 11, and that it was published by Purnell & Sons. Unfortunately, none of those particular issues' covers has any cryptozoology painting!
Happily, however, I have also received a letter from Alex Lamprey of Cardiff, who owns seven issues from volumes 16 and 17, and each of these issues' covers does depict a mystery beast or legendary entity. These are: sea serpents, bunyips, the cailleach-bheur, morrigan, gnomes, the Little People, and lamassu. Obviously, therefore, this series of illustrations did not begin until sometime after volume 11. The artist responsible for them was Angus McBride.
If there is anyone else out there who has seen this partwork (or, better still, owns an edition of it ior at least a run of those issues with cryptozoological back covers), or can offer any extra details, I'd love to hear from you.
STOP PRESS: 20 February 2011.

I'm delighted - and extremely grateful - to say that Alex Lamprey has very kindly donated to me his above-mentioned seven copies of Finding Out. They arrived this weekend, and their Angus McBride back-cover illustrations are every bit as spectacular as I'd hoped for! Needless to say, these near-legendary magazines (at least in my eyes!) now constitute a greatly-treasured addition to my library and images archive, and I shall be keeping a sharp lookout for the remaining 23 issues with McBride zoomythological back covers in order to complete my collection. Meanwhile, a massive THANK YOU!! to Alex for fulfilling a long-held ambition of mine to own at least some of them.

Click here to read the fully-illustrated version of my ShukerNature blog post containing today's very exciting news! Thanks to the kindness of correspondent Ivan Waldock, who owns all 36 issues of Finding Out that possess cryptozoological/mythological back cover illustrations, and has sent me a scan of every one of them, I have been able at long last to provide the full set here online! 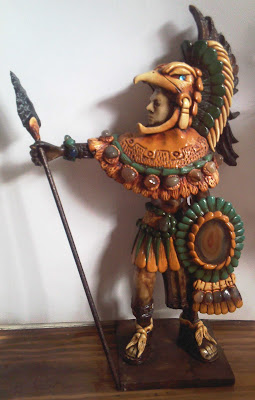 Jon at CFZ Press tells me that my poetry book, Star Steeds and Other Dreams, could well be out by the end of this month, so here, as a taster, is one of its poems, in which I portray the Mesoamerican deity Quetzalcoatl in his feathered serpent guise. As a contrast, the above photo, of a statuette purchased by me a few years ago in Tijuana, Mexico, depicts him in his human form.

The concept of Quetzalcoatl – an Aztec serpent god adorned with feathers rather than scales, and gifted with the ability to soar majestically through the heavens without needing wings – is one that has long fascinated me, so it was inevitable that sooner or later I would attempt to capture the wonder of this spectacular reptilian deity in verse.

And, as you gleam in your jewel-clustered temple,
Coils gliding over your tributes of gold,
Ruby eyes glow with the flames of the cosmos,
Deadly yet passionate, blazing but cold.

Now, as your lightning-forked tongue flickers brightly,
Sibilant breath hissing softly and long,
Bowing before you in rapt veneration
Kneel your disciples in reverent throngs.

Yet, do you laugh at these weak, puny mortals,
Scuttling like ants in the fire of your gaze,
Shielding their eyes in the depths of your shadow –
Turquoise and terrible, willing their praise?