A BLACKER SHADE OF DARK - THE GENETIC EXPLANATION FOR PSEUDO-MELANISTIC TIGERS, REVEALED AT LAST! 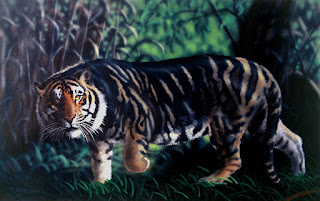 True melanism is when an animal's background colour is abnormally dark (due to the expression of a mutant gene allele), so much so that any surface patterns or markings are hidden by it, as with the rosettes of a black leopard, for example.

Despite many eyewitness reports and anecdotal accounts on file, however, no melanistic or black tiger has ever been scientifically confirmed, and this exotic cat form thus remains a cryptid – claimed to exist by locals but not verified by science (for more details on ShukerNature regarding melanistic aka black tigers, click here).

Yet in recent years, following largely unconfirmed sightings dating back half a century, media reports have documented several living specimens in eastern India's Similipal Nature Reserve of what they refer to as black tigers. Photographs of these supposed black tigers, however, swiftly confirm that they are not melanistic specimens. Instead, they represent an equally intriguing but reverse phenomenon, known correctly as pseudo-melanism.

This is characterised by the animals' background colour being normal but their surface markings being abnormally abundant and broad, and having fused together to yield an almost unbroken, solid black mass of dark pigmentation, especially dorsally and upon the tigers' flanks, that has largely obscured the background colouration. 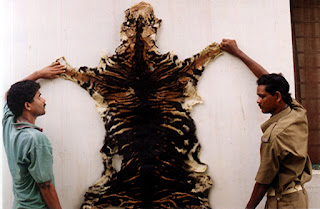 Until very recently, the genetic basis of pseudo-melanism in tigers has remained unknown. In September 2021, however, a newly-published study in the journal PNAS (Proceedings of the National Academy of Sciences) conducted by a team of researchers from the National Centre for Biological Sciences (NCBS) in Bangalore revealed that this condition was the result of a rare mutation in one gene, Transmembrane Aminopeptidase Q (or Taqpep, for short).

Recessively inherited variants of this gene are also responsible for the markings in domestic cats, and in the ornately striped king mutant form of the normally spotted cheetah.

Moreover, whereas it has been estimated that up to 37% of all tigers in the Similipal Nature Reserve are pseudo-melanistic, there do not appear to be any such specimens anywhere else in India. The researchers believe this unusual situation to be due to a combination of a small founder population at Similipal, its isolation from other tiger populations, and inbreeding within the Similipal tiger population. Also, these tigers' darker colouration may be giving them a selective advantage when hunting in the shadowy forests of Similipal.

For further information on ShukerNature concerning pseudo-melanistic tigers, click here; and for feline pseudo-melanism in general, click here. See also this fascinating subject's coverage in my trilogy of cryptozoological cat books – namely, Mystery Cats of the World, Cats of Magic, Mythology, and Mystery, and Mystery Cats of the World Revisited.