As I am presently in the process of completing two major books, I'm sure that you'll understand why my blogging has been somewhat infrequent lately. A few days ago, however, while browsing in my local bric-a-brac market, I made a discovery intriguing enough for me to break off from my books and - after spending quite some time searching vainly for information regarding it - post it here, just in case there is someone out there who can offer any clues concerning this enigma.
The discovery in question was the very old, sepia-tinted postcard reproduced above. The reverse bears the following simple, if somewhat clumsily-worded, caption: "View on the Helmets of the Giants", which is also given in French and in German. No other detail, not even the location of these remarkable-looking exhibits, is present. The postcard had not been used, so there is no writing or stamp to give any clue as to its age or origin either.
So what, precisely, are these colossal-looking, and extremely ornate, helmets, and where were they being exhibited? Any suggestions or information would be very greatly welcomed.
Answers on a postcard - but not this one!


UPDATE: MARCH 2011 - GETTING AHEAD WITH THE GIANT HELMETS!

I've finally solved the mystery of these giant helmets, thanks to some investigations on my behalf by Fortean Times's art director, Etienne Gilfillan - thanks, Etienne! I have documented Etienne's discoveries in my latest Alien Zoo column, in FT #274:

"Etienne conducted some enquiries of his own, which led him to contact Micheline Ruyssinck, a curator at Belgium’s Royal Museum of Art and History. Intrigued by the postcard’s picture, she in turn sent details to Laurent Duibisson, curator of the Museum of the Giants in the city of Ath (housing various huge figures and other exhibits that have been created for folklore-inspired festival processions in Belgium). And sure enough, he knew all about them. It turns out that the postcard depicts the backs of two extremely large, helmeted, manufactured heads that represent a pair of traditional Antwerp giants – Druon Antigonus and Pallas Athena (Laurent sent photographs of other old postcards depicting them from the front and wearing the helmets shown on my postcard). 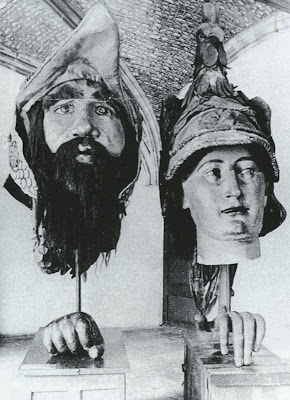 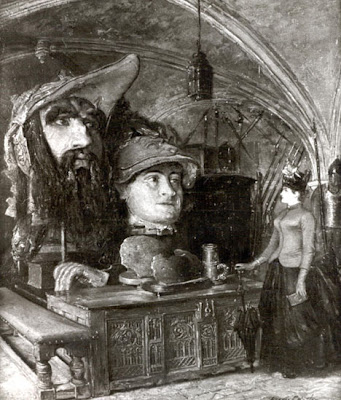 "These very elaborate heads featured each year in Antwerp’s annual Ommegang (purification) festival’s procession until 1872, when they were replaced by some new heads and were then stored in the Steen, a castle now housing Belgium’s Navy Museum. They were later transferred to Antwerp’s Museum of Ethnology, where they were placed on display. Following some restoration work to recreate their former glory, in 2001 Laurent saw the heads there himself, and in 2002 his Museum of the Giants hosted an exhibition devoted to them. These spectacular heads are currently in the collections of Antwerp’s new Museum aan de Stroom (MAS), due to open in May 2011." 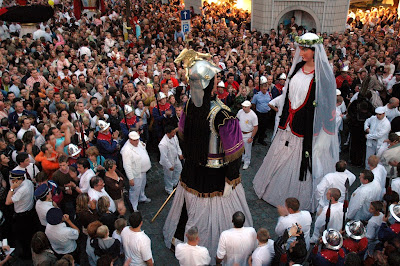