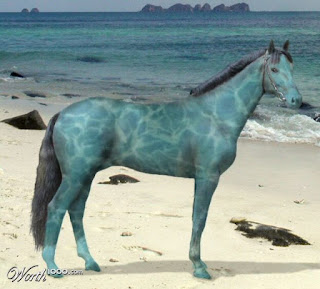 A digitally-created hairless blue horse, created by Daisiem and appearing on the now-defunct Worth1000 website devoted to photoshopped creations and competitions ((c) Daisiem/Worth1000 - reproduced here on a strictly non-commercial Fair Use basis for educational/review purposes only)
Excerpted from my book From Flying Toads To Snakes With Wings (Llewellyn: St Paul, 1997.
Posted by Dr Karl Shuker at 19:59 7 comments:

Yes, I do enjoy the occasional alliteration! 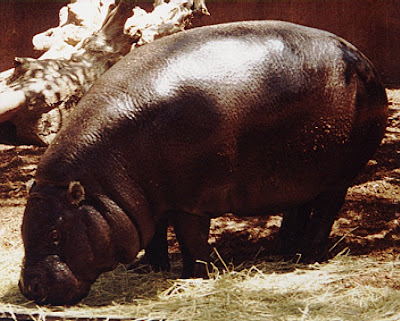 But seriously: in a recent ShukerNature blog entry, I documented a selection of reports suggesting the possible survival into recent history of various giant lemurs on Madagascar. However, these are not the only cryptozoological mammals on record from this Indian Ocean island mini-continent, as demonstrated by the following pair of enigmas.

WHAT’S IN A (VERY LONG) NAME? THE KILOPILOPITSOFY

Also known as the tsomgomby, lalomena, or railalomena, the kilopilopitsofy is an unidentified beast spoken of by the Belo-sur-mer villagers to scientists Dr David A. Burney and Ramilisonina during their ethnographical researches on Madagascar in the mid-1990s.


As with a mystery lemur called the kidoky (see my earlier blog), they received consistent reports of this mystery animal from several different eyewitnesses, including, once again, Jean Noelson Pascou, who was able to describe the kilopilopitsofy in considerable detail, following his own sightings of it, one of which was made as recently as 1976. According to Pascou, it is cow-sized but hornless, has very dark skin, pink colouration around its eyes and mouth, fairly large floppy ears, big teeth, large flat feet, is nocturnal, and escapes from danger by running into the water.


When shown photos of various animals, another kilopilopitsofy eyewitness selected a hippopotamus as bearing the closest resemblance to the kilopilopitsofy. Moreover, when asked to describe the sounds that the latter mystery beast makes, Pascou, who was well known in the village as a skilled imitator of local animal noises, gave voice to a series of deep, drawn-out grunts, which the startled scientists realised were very similar to the sounds made by the common African mainland hippopotamus. Yet no species of hippopotamus is supposed to exist on Madagascar – or not any longer, that is. 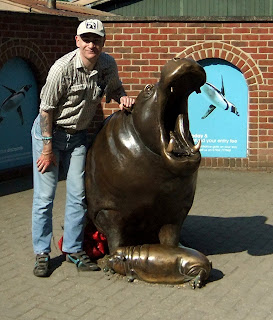 In fact, living alongside the giant lemurs on Madagascar were once no less than three different species of endemic Malagasy hippopotamus. These were: the lesser Malagasy hippo Hippopotamus laloumena (a small relative of the common African mainland species, H. amphibius); the Malagasy dwarf hippo H. lemerlei (an even smaller, dwarf species); and the Malagasy pygmy hippo Hexaprotodon madagascariensis (a distinctive pint-sized species more closely related to the African mainland pygmy hippo). Just like the giant lemurs finally became extinct, however, so too did all three Madagascan hippo species, once again having been hunted and eaten by humans, but with subfossil evidence confirming that at least one species, the Malagasy dwarf hippo H. lemerlei, was still alive as recently as 1000 BP. Furthermore, judging from the testimony of Pascou and others with regard to the mystifying kilopilopitsofy, zoologists as well as cryptozoologists now consider it plausible that at least one of Madagascar’s diminutive trio of hippos actually persisted into much more recent times, and perhaps even into the present day.


As for this mystery beast’s floppy ears, they deem it possible that these were actually loose jowls and cheeks, misidentified as ears when seen fleetingly at night. Alternatively, it may be that they really are ears, larger than those of typical hippos, which have evolved to help dissipate heat if, as seems to be the case, the dwarf hippo in particular was (or is?) more terrestrial than typical hippos.


In 1876, the skin of an alleged tsomgomby was actually shown to Westerner Josef-Peter Audebert, who likened it to that of an antelope (no species of which exists on Madagascar), and stated that it had supposedly come from the south of the island. If only this skin had been preserved – DNA analyses would have unmasked its owner’s identity and, perhaps, finally resolved the longstanding mystery of this very perplexing Madagascan cryptid.

FUSSING OVER A FOSSA

Known zoologically as Cryptoprocta ferox, the fossa is Madagascar’s largest native mammalian carnivore, and superficially resembles a small long-tailed puma, but is more closely related to the civets and genets (viverrids). It has a total length of 1.4-1.7 m, but there was once an even bigger species, the giant fossa C. spelia, which measured a formidable 3 m long. Although officially believed to have died out at least several centuries ago, reports of a very large, fierce cat-like beast stalking this island’s most inaccessible forests and known locally as the antamba have led to speculation that perhaps the giant fossa may still exist. As might be expected, the antamba did not escape the attention of the indefatigable Admiral de Flacourt, who documented it as follows:

The Madagascar antamba is an animal as large as a dog, with a round head, and, according to the relations of the Negroes, resembling the leopard. It devours both men and cattle, and is only found in the most desert[ed] parts of the island.


In November 1999, fossa expert Luke Dollar, intrigued by persistent rumours concerning the antamba, trekked in search of it through northeastern Madagascar’s Zahamena National Park, also known as the Impenetrable Forest, and said to harbour this elusive beast. Unfortunately, he did not sight it, but has not given up hope that it does exist, as most of this uninviting region has never been scientifically explored.


Also worth noting is that, although once again still-unconfirmed by science, there have been a number of reports of melanistic (all-black) fossas in certain eastern rainforest areas of Madagascar. 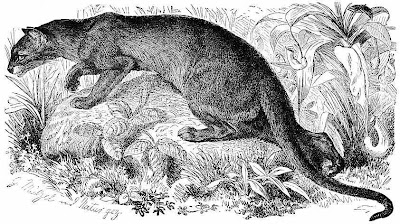