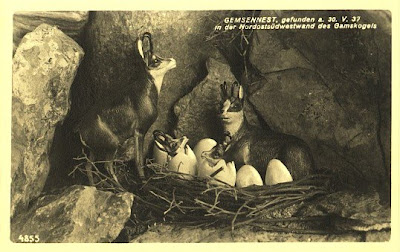 Animal fakes and frauds can turn up in the most unexpected locations. While idly leafing through a box of old postcards at a collector’s fair several years ago, I came upon a delightful black-and-white German picture postcard that I just had to have. It depicted a pair of life-like models of the chamois, that engaging European mountain goat immortalised in the Babycham adverts, but not frolicking on some alpine peak. Instead, they were rearing a clutch of chamois eggs in an eyrie-like nest! As can be seen from this delightful postcard, the female chamois is busy incubating the clutch, including two chamois eggs shown at the very moment of hatching, while her mate stands guard proudly. According to the card’s caption, these chamois and their nest of eggs were discovered on 30 May 1937 upon Gamskogel, a steep mountain in the Austrian Tyrol. Sadly, I have no additional information regarding this wonderful tableau, but it is certainly one of the most charming examples of a Lusus Naturae that I have ever seen!
Posted by Dr Karl Shuker at 02:00 3 comments:

THE DAISY DOG OF CORNWALL 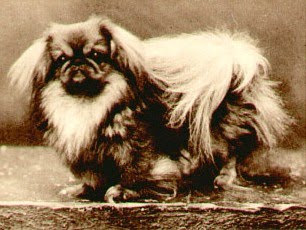 Here's a blast from my past - a two-spread scan of one of my very first cryptozoological articles, one that may not have been seen by many people outside the avicultural community. Just click the scans for enlarged, readable versions. Hope you enjoy it! 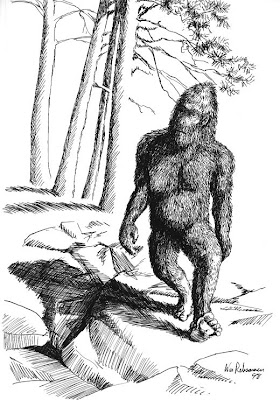 I am greatly indebted to American cryptozoological investigator Todd Jurasek for the following information and kind permission to publish it, and also to acclaimed cryptozoological artist William Rebsamen for the wonderful artwork above.
In autumn 2002, Todd visited the village of Siawi in a remote region of Papua New Guinea roughly 18 miles east of the border with Irian Jaya just below the mountains, and approximately 6 miles from the Sepik River. During his stay there, he interviewed members of several different tribes in the hope of extracting information of cryptozoological relevance, with the aid of a missionary called Jason acting as interpreter.
He obtained some information concerning giant monitors (the apparent identity of the Papuan artrellia) and also giant snakes, as well as some more surprising testimony concerning the alleged existence here of a lion-sized cat (no feline species is known to exist on New Guinea) and also a possible large canine cryptid. But by far the most extraordinary information obtained from these interviews concerned an alleged bigfoot-like man-beast, which was described to Jason by members of both the Siawi and the Amto tribes.
According to their accounts, this New Guinea ape-man, known to the Amto people as the kayadi, was at least man-sized (i.e. about 5 ft 5 in tall, judging from the average height of most native peoples on New Guinea), hirsute, and bipedal, but also able to climb trees very rapidly, and strong enough physically to throw humans if confronted. One Amti tribesman stated that in 1981 a kayadi had been startled by his uncle while digging for eggs in a cave near his village, and another claimed that a local girl had actually been kidnapped a while back by one of these man-beasts.
Many of the major islands or island groups in the vicinity of New Guinea can lay claim to reports of man-beasts - such as the yowie in Australia, maero or macro in New Zealand, orang pendek in Sumatra, batutut in Borneo, and mumulou in the Solomon Islands. However, as far as I am aware, this is the first time that a named man-beast has been reported from New Guinea, thereby making Todd's findings a very notable contribution to cryptozoology.
Posted by Dr Karl Shuker at 02:14 7 comments:

STAR STEEDS - GALLOPING HOME TO ITS OWN BLOG! 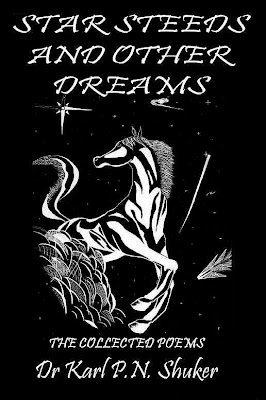 Whereas my first 14 books and numerous articles have all focused to greater or lesser extents upon non-fictional zoology, cryptozoology, Forteana, and mythology, my 15th book, Star Steeds and Other Dreams, is, as its subtitle The Collected Poems reveals, a collection of my poetry. As this is such a departure from my more familiar writings, upon reflection I felt that it deserved its own, completely separate blog.

And with that in mind, I have now created one for it, entitled - surprise, surprise! - Star Steeds and Other Dreams, at: http://starsteeds.blogspot.com which I hope that you'll visit whenever you have time, and where I'll be posting selections of my poetry, not only from this book but also various unpublished poems of mine never before seen.

Star Steeds the book is published by CFZ Press, and is readily available directly from them as well as online from such literary stalwarts as Amazon, Waterstones, W H Smiths, Barnes & Noble, and AbeBooks among many other websites. Thanks to everyone who has already purchased a copy, and thanks also in advance to those of you in the future who do so.
Posted by Dr Karl Shuker at 01:41 No comments: