THE PEEL STREET MONSTER - LOOKING BACK AT A LOCAL CRYPTID 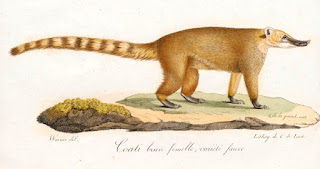 It's always good to stumble upon the history of a mystery beast not previously documented in the cryptozoological literature (which it hadn’t been, prior to my doing so in a Fortean Times article and subsequently in my book Extraordinary Animals Revisited), and especially when it happens to be a local one – having occurred just a few miles away from where I was born and still live. Yet although the case of the Peel Street Monster began in high drama, the outcome was distinctly underwhelming.

During winter 1933-34, rumours began circulating within the area of Brickkiln Street and Peel Street in the large urban West Midlands town (now city) of Wolverhampton, England, of a bizarre creature that was attacking children. One bold lad who tried to pursue this beast, which became known as the Peel Street Monster, presumably angered it, because it allegedly leapt at his throat, attempting to bite him. 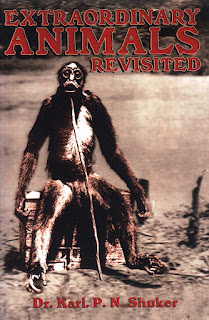 There came a day in January 1934, however, when this vicious creature made one onslaught too many. A crowd of boys and youths, who included among their number a 17-year-old called Georgie Goodhead, were playing on the corner of St Mark's Street and Raglan Street, when another boy, Jackie Franklin, raced out of Peel Street and up towards them in a state of great alarm. Shouting for help, he told them that a youngster called Billy Wright (but not the famous future Wolverhampton Wanderers footballer of that same name, at least as far as I'm aware) was being attacked by the monster on some waste ground. Georgie and his mates raced back to Peel Street at once with Jackie, where they observed a peculiar-looking animal threatening a small boy. In a later Wolverhampton Express and Star newspaper report, Georgie recalled:

I went and saw a queer animal, far too big for a rat, leaping towards a child about five-year[s]-old. I shouted and the thing turned on me. It crouched, its eyes bulging, then it leaped like lightning.

According to the newspaper report, as the creature neared his throat Georgie picked up a brick and hit it with this hefty implement as hard as he could. The animal collapsed, falling into a pool of water, and was swiftly kicked to death by the crowd that had gathered to watch the boys confronting it. Happily, little Billy was unhurt, and was taken by some of the boys to his parents' sweetshop in Peel Street, while Georgie and Jackie gave a statement at the Red Lion police station and received half a crown each for their bravery.

As for the Peel Street Monster: apart from noting that it was a male, no-one had any idea what this mystifying beast was. According to media reports, naturalists, taxidermists, and vets were all called in to identify it, but to no avail. One unnamed 'expert' did suggest that it may be an anteater – in Wolverhampton?? Another one considered it possible that the creature (despite being dead!) might become a serious rival to the Loch Ness monster. 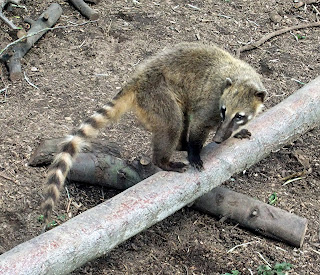 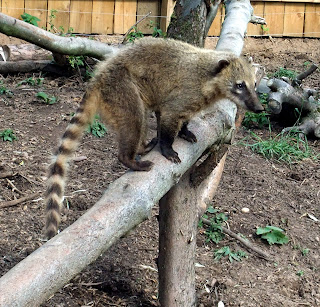 A ring-tailed coati Nasua nasua, the most familiar of the four recognised coati species and native to South America (© Dr Karl Shuker)

Events took an even more surprising turn the following day, when a second mystery beast was found in the Brickkiln region. This one, a female, was already dead, but it closely resembled the Peel Street Monster. Moreover, a photograph of it published in the Express and Star helped to identify its species.

It was a South American coati (coatimundi) – a long-tailed relative of the raccoon and belonging to the genus Nasua, with a head-and-body length of up to 2 ft, a thin tail of much the same length, and distinguished by its very elongate snout (responsible for the 'anteater' identity proffered for the Peel Street Monster?). But where had it, and the Peel Street specimen, come from? And if there had been a pair on the loose, could there be more?

The prospect of a plague of coatis terrorising the good residents of Wolverhampton may seem decidedly slim (not least because the favoured diet of coatis consists of invertebrates and small lizards – as opposed to small children!). Nevertheless, the council was clearly taking no chances, for as the Express and Star duly reported:

And fresh fears arose in Wolverhampton as rumours spread that there may be a colony of the creatures hiding in partly closed cellars. Hundreds of people gathered in Salop Street to watch council workers trying to ascertain if a colony of the creatures were hiding there. The crowds were so great they hampered the efforts of the official rat-catcher. In the search, weapons brought in to confront any coatimundis found included poison gas, traps, sulphur, terriers and ferrets. It was uncertain whether the ferrets were to be used following a suggestion that they might form part of the coatimundi diet [I don't think so!]. 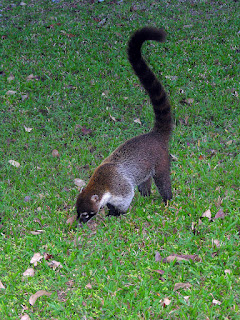 As ably demonstrated by this white-snouted coati Nasua narica: when walking quadrupedally, coatis are famous for often holding their tails vertically upright with a little curl at the tip, giving them an unexpected superficial resemblance to small furry sauropod dinosaurs! (© Dennis Jarvis/Wikipedia – CC BY-SA 2.0 licence)

Ferrets or no ferrets, the search did not find any other errant coatis. Police investigations did reputedly reveal that the female coati had been in a travelling menagerie that had parked here earlier (circuses and fairs would sometimes set up on this slum-area waste ground at that time), and had discarded the creature's body after it had died. However, the Peel Street Monster's origin remains a mystery to this day – as do various other aspects of this curious case.

Can we even be sure that the Peel Street Monster was a coati? For if the accounts of it are true, it must have been an exceptionally belligerent specimen. The Express and Star published a photo of this creature lying dead with a crowd of onlookers surrounding it, but its form cannot be discerned. And what happened to the two carcases? Some correspondences reminiscing about this incident appeared 50 years later in the Express and Star during March 1994, but conflicting recollections only served to muddy these already murky waters even further.

All in all, after also allowing for the likelihood of embellished descriptions with such an odd episode, the only thing that can be said with certainty regarding the Peel Street Monster is that something unexpected was seen and killed in Wolverhampton – a most unsatisfactory end to one of the most intriguing OOP animal cases on file from the West Midlands. True, coatis (unlike anteaters!) are nowadays often kept as exotic pets – a friend of mine at university owned one, and I also well remember about 10 years ago seeing one with a collar and lead being taken for a walk by its owner through another local Midlands town, duly attracting considerable interest and attention from passers-by, including me – but whether an escaped/released pet coati explains the Peel Street Monster is another matter entirely.

Finally: I was recently reminded of this curious case when Canadian Facebook friend Kevin Stewart kindly sent to me a scan of a Canadian newspaper cutting documenting it, which was particularly interesting to me as I was previously unaware that this relatively obscure, ostensibly local-interest-only UK story had ever attracted any overseas media coverage. The cutting was from Alberta's Edmonton Bulletin for 17 February 1934, so for the purposes of historical documentation, here it is – thanks Kevin! 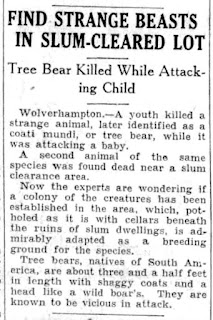