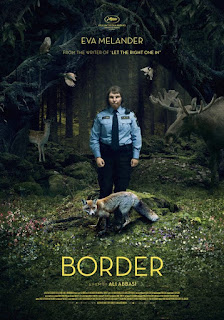 Last night, I watched a very strange Scandinavian fantasy movie, made in Sweden, but it was strange for all the right reasons. Entitled 'Border', it was directed by Ali Abbasi, produced by META Film/Black Spark Film & TV/Karnfilm, and released by TriArt Film in 2018. I'd wanted to see it for ages, but it only received limited cinema release here in the UK despite being an Academy Award nominee. Happily, however, I recently managed to purchase it on DVD.

Based upon an original short story entitled 'Gräns', written by John Ajvide Lindqvist, who also wrote this movie version's screenplay, 'Border' tells the story of a shy Swedish customs/border guard named Tina, whose decidedly homely physical appearance belies her remarkable gift for quite literally sniffing out human emotions, enabling her to detect by olfactory means if a person is feeling guilt, shame, anxiety, or other normally concealed traits. Needless to say, this unusual talent proves very useful in identifying incoming visitors to Sweden who are smuggling contraband or worse.

Always ill at ease with other people, Tina is only truly at peace when alone in the forest, among Nature - until an equally strange and homely-looking man named Vore appears on the scene, and to whom she is instantly attracted, especially when she discovers that just like her, he bears a mysterious scar at the base of his spine, as if something has been surgically removed, something like a tail...? Those readers of this mini-review who are au fait with Scandinavian mythology and/or manbeast-related cryptozoology will no doubt have already guessed where this plot is going. Suffice it to say that Tina finally learns the shocking truth that although they are humanoid, she and Vore are not human. But more shocks are to come, especially in relation both to a very disturbing investigation that she is involved in as part of her work, and also to her origin. 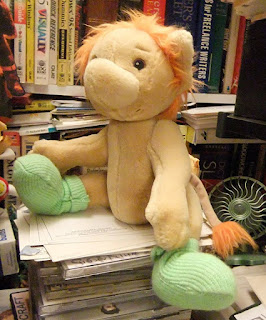 This movie at times makes for very dark, bleak, desolate, and quite merciless but also very compelling viewing, its otherworldliness holding my interest and attention at all times, although the penultimate scene, when Tina finally visits the past that had been hidden from her throughout her life, is truly heart-rending. Having read a great deal on the subject of the entities that Tina and Vore are, I have to say that I strongly suspect that this movie's makers took great liberties when it came to depicting certain aspects relating to their, shall we say, procreative anatomy and behaviour, but perhaps I am simply ill-informed here (if I am, I hope that my Scandinavian friends and colleagues will educate me accordingly!).

Ideally, 'Border' could benefit from being dubbed into English, but its English subtitles more than adequately suffice, especially as the acting prowess of its two leading stars (Eva Melander as Tina, Eero Milonoff as Vore) is of such quiet (and occasionally not so quiet) intensity that very often words are not required, their visual strength is more than sufficient to tell the audience all that it needs to know. All in all, 'Border' is quite simply unlike any movie that I have ever seen before, truly bewitching, often disturbing, and ineffably sad, a very unexpected example of humanity's inhumanity to those who are different, for whatever reason. As for anyone who hasn't seen this movie but would like to know the true nature of Tina and Vore, let's just say that those who enjoy insulting, demeaning, and arguing with others on social media provide a major clue, albeit in name only - think about it... 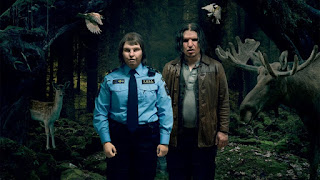 POSTSCRIPT – CONTAINS 'BORDER' SPOILERS!!
If you don't want to discover what Tina and Vore were in 'Border', read no further!

About 13 years ago, I was walking round a local car boot sale at the end, while all of the sellers were packing away their unsold wares, ready to go home, when, lying amidst a forlorn pile of unsold items discarded by various sellers, and staring up at me disconsolately, was the delightful plush-furred, tufted-tailed, Scandinavian troll pictured in the two photographs included above and below by me in this present ShukerNature blog article.

I knew full well that, just like all discarded items there, his fate was to be loaded onto a lorry by one of the car boot sale's litter pickers and then tipped onto a fire and burnt. Needless to say, therefore, without further ado I picked him up, and found that he was perfectly clean and intact, but unwanted by his owner and unchosen by any of the buyers at the sale. So I duly took him back home with me. Ever since my rescuing him from his destined fiery fate, he has sat very happily upon a pile of postcards and CDs in my study, surveying his surroundings and clearly very content to be here, just as I am to have been able to save him and add him to my eclectic menagerie. 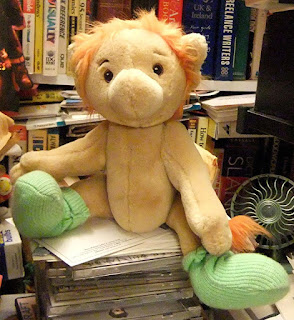