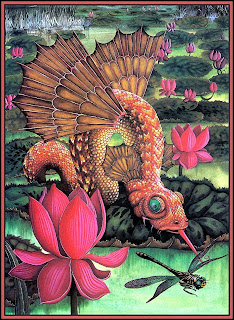 In a recent ShukerNature blog post (click here), I discussed the celestial stag – just one of several obscure monsters and entities from Chinese folklore that were documented in Jorge Luis Borges's classic work, The Book of Imaginary Beings (rev. ed. 1974).

Another of these mythical creatures was the Chinese hua fish, of which Borges, sadly, had very little to say - though the little that he did say made it sound a fascinating if decidedly ill-omened beast:

"The Hua-fish, or flying snakefish, appears to be a fish but has the wings of a bird. Its appearance forebodes a period of drought."

Elsewhere I have also seen it said that this creature's appearance presages an outbreak of pestilence. In short, therefore, it is not something that one wishes to see if all is going well!

The hua fish is just one of several curious beasts of fable that were included in the T'ai P'ing Kuang Chi ('Extended Accounts of the Reign of Great Tranquillity and Prosperity'), which was completed in 978 AD, and published three years later.

So obscure is this legendary animal that I know of only one excellent portrayal of it – the spectacular illustration that opens this present ShukerNature blog.

Within my library are quite a few delightful works of what I refer to as pseudozoology. Most of these are large, lavishly-illustrated books purporting to be republished tomes of arcane natural history, but which upon reading are swiftly recognised as adroitly-constructed fiction penned with tongue very firmly in cheek. An excellent example of this highly-specialised genre is a truly spectacular tome entitled Inventorum Natura: The Expedition Journal of Pliny the Elder (1979), compiled and exquisitely illustrated by celebrated fantasy writer-artist Una Woodruff – and this is the work from which the above illustration of the Chinese hua fish is derived. Moreover, as seen below, it also features on this book's front cover.

Although Woodruff's book is spoof fiction, the mythological creatures documented in it are all genuine creatures of legend as opposed to invented ones. Consequently, if anyone has additional details concerning the hua fish, I'd greatly welcome seeing them submitted here as comments.