THE PERILS OF PANGOLINS WHEN ENCOUNTERING LIVING DINOSAURS…?

Late 1800s engraving of a pangolin

Also known as scaly anteaters, pangolins are native to Africa and Asia, and have been implicated in certain cryptozoological cases - most notably the veo reported from the small Indonesian island of Rinca, and the fraudulent gorgakh of India (click here for my ShukerNature coverage of both of these animals). However, I am only aware of a single case in which a pangolin has featured in a report of a supposed living dinosaur – and here it is.

Although I've had this account on file for many years, I misplaced it a long time ago, and even though I've wanted to refer to it since then on a number of occasions in various of my publications, I could never do so, because I've never been able to find it again - until tonight, when, as so often happens, I came upon it unexpectedly. Having done so, however, I am now placing it on record here without delay, to ensure that I never lose track of it again! 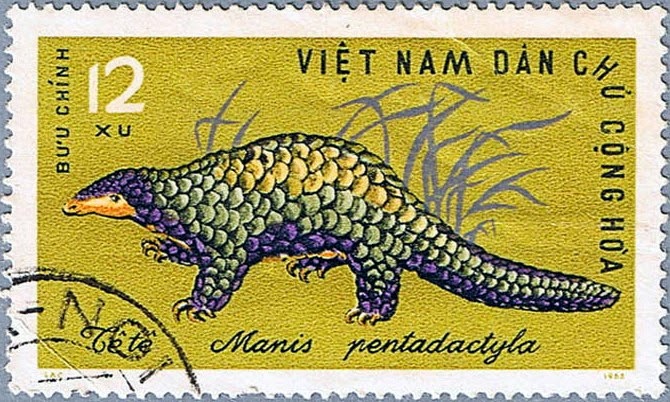 Published in the 18 February 1964 issue of the then-weekly British magazine Animals, it consists of a response by English zoologist Dr Maurice Burton to a letter from a reader that had been published in a previous issue and which had dealt with the possible existence of living dinosaurs and pterodactyls.

The reason why I couldn’t find this account in my files before is that I had forgotten that its first part dealt not with pangolins but instead with Burton's belief that a large and very distinctive African waterbird known as the shoebill Balaeniceps rex was being mistaken for pterodactyls when seen in flight – a plausible theory that I have documented in further detail within my book In Search of Prehistoric Survivors (1995).

Shoebill – a modern-day pterodactyl impersonator, depicted in a 1901 painting

Consequently, I had filed it away in a folder dealing with sightings of alleged living pterosaurs, which is not one, therefore, that I was ever likely to look through in search of a pangolin-related item.

Anyway: back to this rediscovered account's pangolin section. After identifying living African pterodactyls as shoebills, Burton then considered the prospect of living dinosaurs, and provided a delightful anecdote as a reason why one should not always take eyewitness accounts on face value.

A pangolin illustration from the 1830s

Over the years, I've collected a number of wonderfully-bizarre zoological misidentifications (my book From Flying Toads To Snakes With Wings, 1997, contains an entire chapter devoted to some of them; and a particularly surreal one, the Kintail 'capybara', is documented here on ShukerNature), but Burton's drolly-recalled example is definitely one of my favourites, which is another reason why I am so pleased to have finally found it again. Here is what he wrote:

"Several reports of dinosaurs, from places as far apart as Canada and Borneo, have been investigated – insofar as one can investigate the report of an eyewitness. In none of these cases were there any solid grounds for supposing the reports to be more substantial than the one from Malaya. There a witness reported having seen a dinosaur cross the road in the beams of his headlamps. He estimated it to be not less than 25 feet long.

"When taken round the galleries of the Raffles Museum so that he could indicate the kind of animal he thought he had seen, he pointed without hesitation to a pangolin and agreed he had misjudged size and distance. The Malayan pangolin is less than 3 feet long."

The perils of pangolins upon accurate judgement when encountered unexpectedly! In so many cryptozoological cases, mystery beasts are very much in the eye of the beholder – but not always, which is why I remain fascinated by the subject.

To be fair, however, anyone not familiar with pangolins might well consider them reptilian based upon their scaly outward appearance, and their surprise at suddenly seeing such an exotic-looking animal might well lead them to exaggerate its size and distort its form when recalled at a later time - unless of course there really is an unknown, giant variety of pangolin existing incognito within the jungles of Malaysia…??

A living pangolin – not a living dinosaur! (public domain)