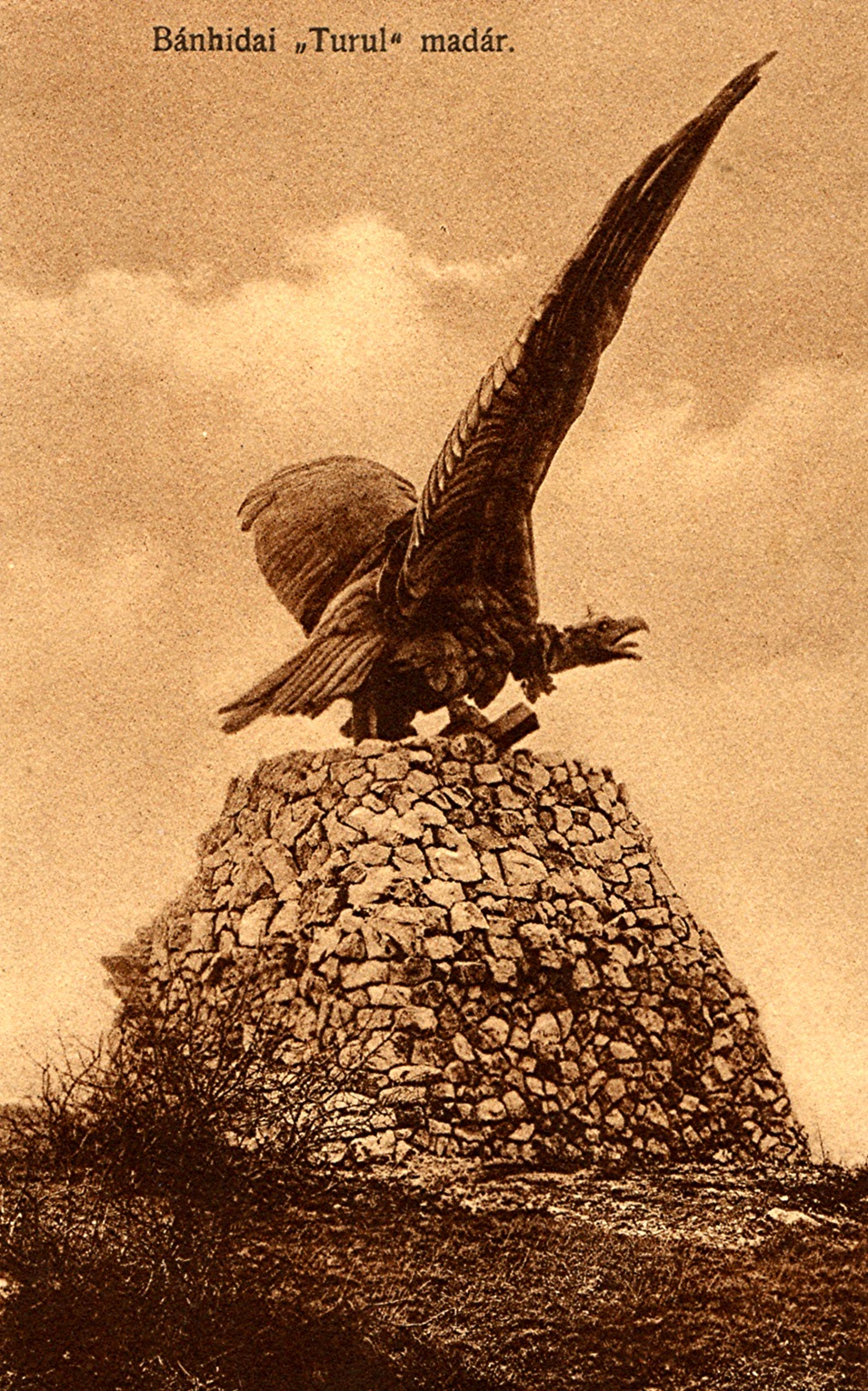 Sepia postcard dated 1927, depicting a statue of the turul bearing the crown of Attila the Hun and located near Tatabánya in Hungary (Dr Karl Shuker)

Back in the good years of my life, when my dear mother, Mary Shuker, was still here with me, we visited together countless antique and book fairs, bric-a-brac markets, car boot sales, and suchlike, both here in Britain and overseas, and spent many happy hours browsing through the assorted paraphernalia in search of that special something. During those times, I seemed to develop what others have jokingly called a gift, a talent, or even an 'eye', for spotting unusual items of a cryptozoological or zoomythological nature, many of which I purchased if reasonably priced, and I have documented a number of these little 'treasures' on ShukerNature (see here, here, and here, for instance) and elsewhere in my writings.

Since Mom passed away, on Easter Monday 2013, however, my interest in such events has dwindled almost to nothing, as I feel so abjectly sad to be walking around them without her, and on the few occasions when I have visited one, I've never come upon anything relevant to my zoological specialities. Which has made me wonder: perhaps I didn't possess a gift, a talent, or an eye for finding such items after all – perhaps, just as she was in so many other areas too, Mom had been my muse, my inspiration, for uncovering them. 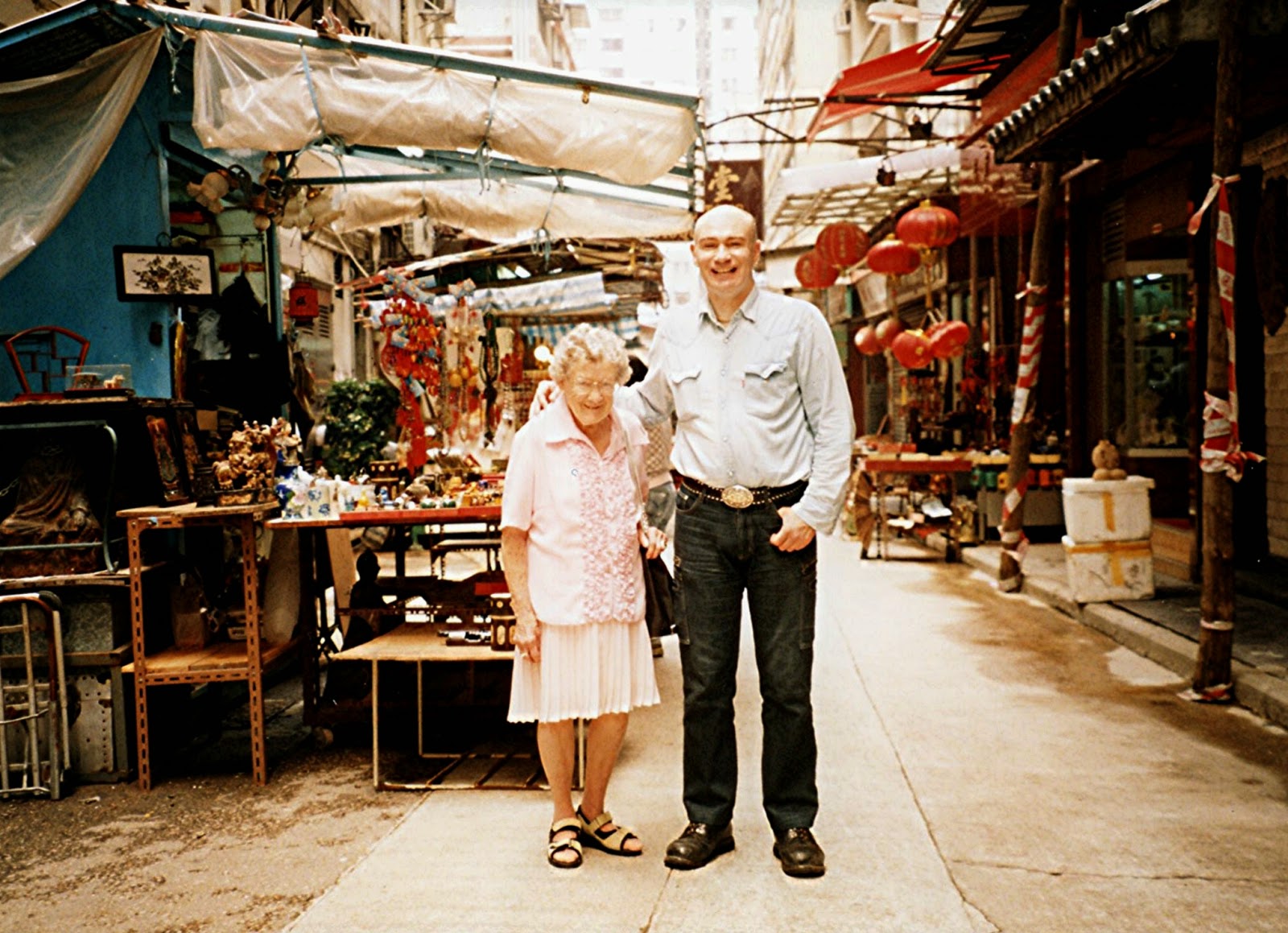 Mom and I amid the treasures and tranklements (a favourite local-Midlands-dialect word of Mom's) in Hong Kong's famous Cat Street antiques and curios markets, summer 2005 (© Dr Karl Shuker)

And then, yesterday, while visiting a local town to do some ordinary shopping, I unexpectedly came upon a tiny indoor book fair, which I hadn't known about as it was only visiting temporarily. Wandering around the stalls, I came to one that had a large box of old picture postcards, priced at 50p each, and numbering well over a hundred cards in total. In the past, I'd have laboriously perused each and every one, in case any of them depicted something of zoological or mythological pertinence, as I've found a number of hitherto-obscure illustrations from such sources before, and have been able to include them in my writings. Yesterday, however, no longer fired with such enthusiasm, I simply flicked through a dozen or so at random in a desultory, disinterested manner – thereby making it all the more surprising that out of such a small number glanced at by me, one of them should just so happen to depict a statue of a little-known but fascinating bird of mythology – the Hungarian turul. 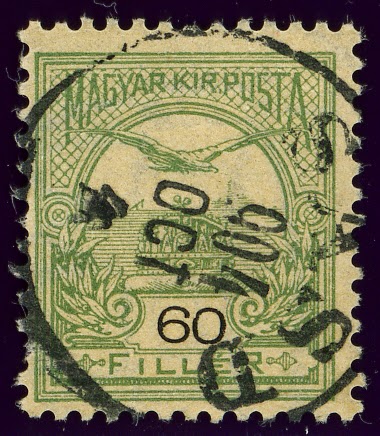 Recognising it immediately (my wildlife stamp collection contains several early Hungarian stamps featuring the turul), I naturally purchased the postcard, and its picture opens this present ShukerNature article. On its reverse was a handwritten note dated 21 September 1927, so the card had evidently been produced sometime prior to this – but there is no publisher name or any other details regarding the card's origin or age printed upon it.

Researching its photograph, I discovered that the statue it portrays is made of bronze and is located on top of Gerecse Mountain overlooking the major city of Tatabánya in northwestern Hungary, and the turul is depicted bearing the crown of Attila the Hun (not the Holy Crown of Hungary, as sometimes claimed). But what is the turul? What is its history, its symbolism, and why is it so important in Hungarian mythology? 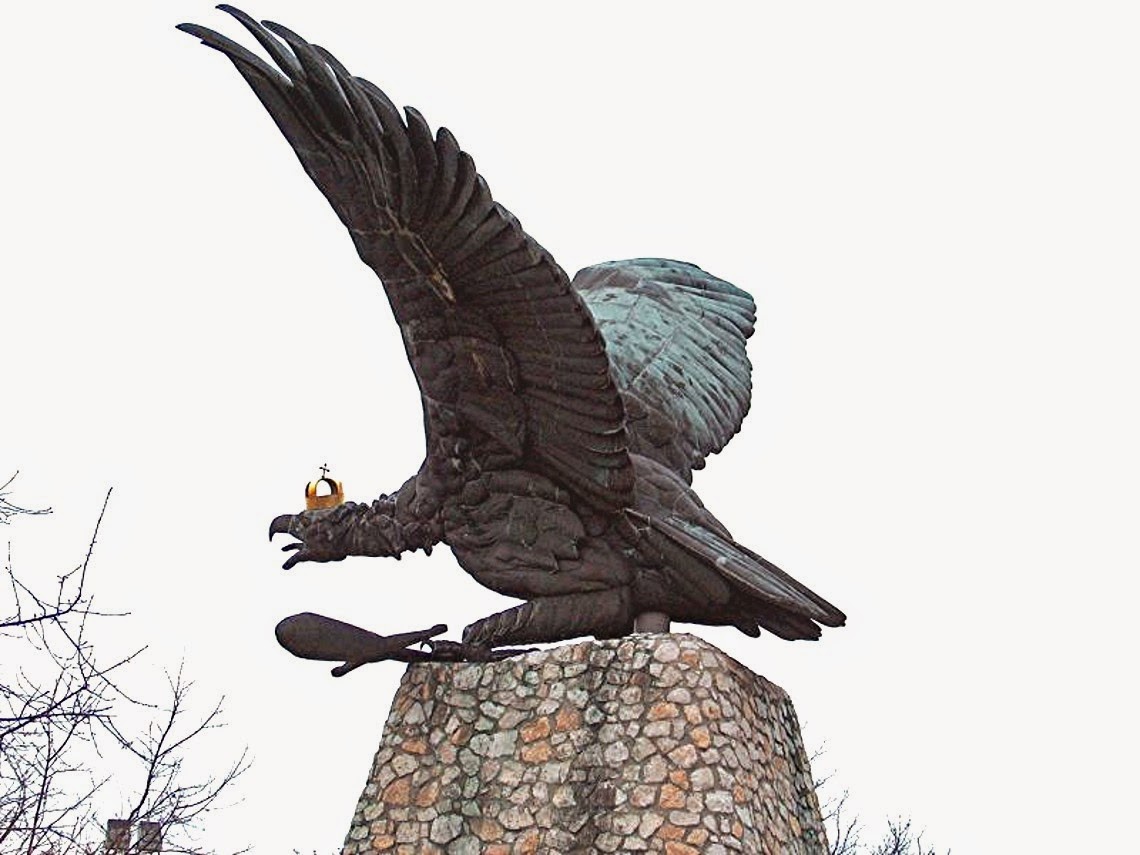 More than 260 statues portraying the turul can be found in Central Europe, of which 196 occur in Hungary itself, with the others present in regions of Austria, Romania, Slovakia, Serbia, and Ukraine that had once been part of Greater Hungary. The most recently-created of these is a beautiful example located in Hungary's Ópusztaszer National Heritage Park, and which was officially unveiled on 29 September 2012. Moreover, boasting a stupendous wingspan of 49 ft, the Tatabánya turul statue depicted on my picture postcard is reputedly the largest bird statue in the world, and is certainly the largest bronze statue of any kind in Central Europe (there had been two other turul statues of the same size in what had formerly been Greater Hungary, but both of those are now destroyed) – all of which emphasises just how significant this mythological bird is deemed to be in traditional Magyar lore. 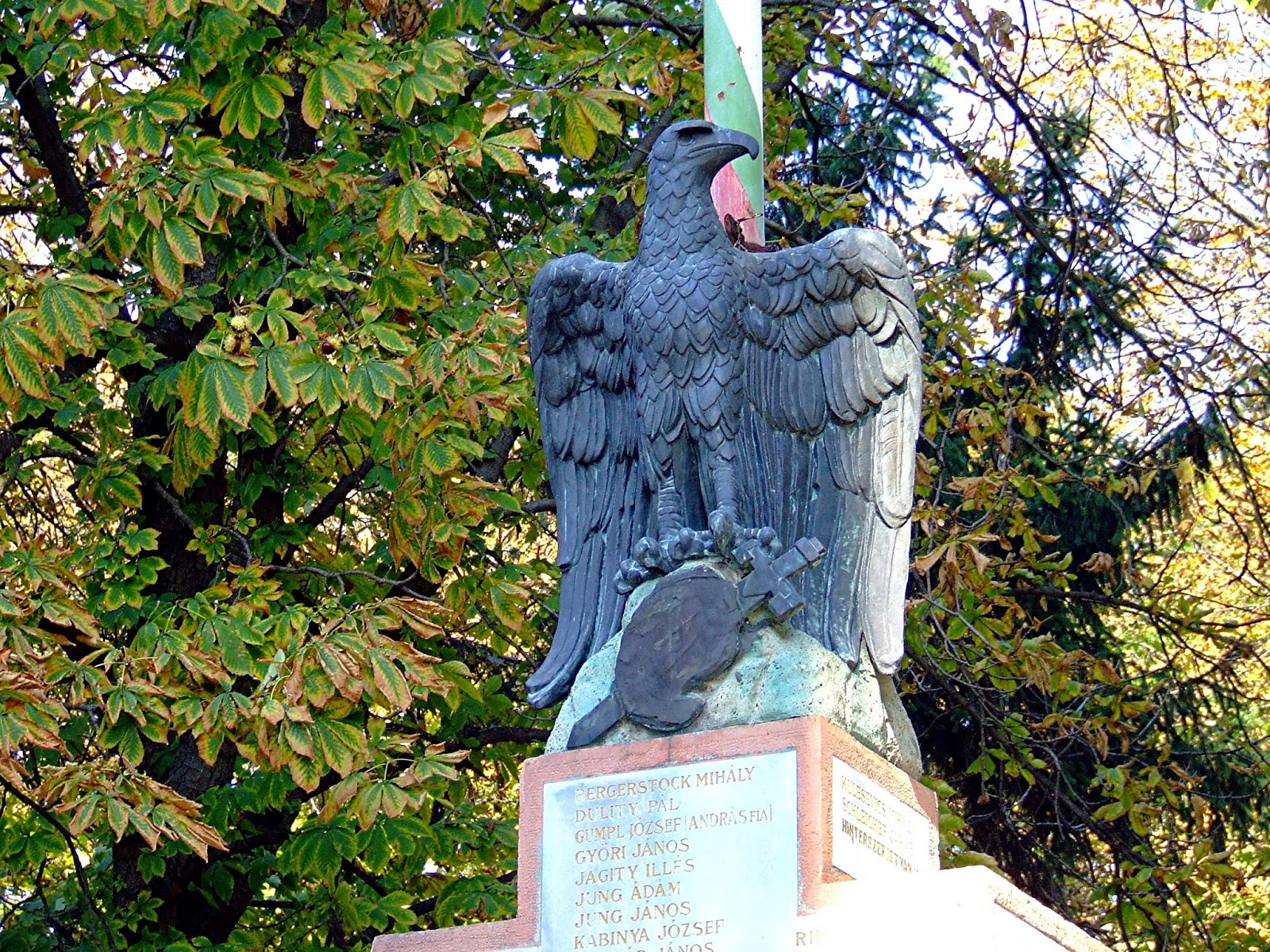 Perhaps the most famous, celebrated turul statue of all, however, is the magnificent sculpture standing high above the River Danube on a plinth over the Habsburg Steps at the Buda Palace (formerly called the Royal Palace) at Budapest, Hungary. 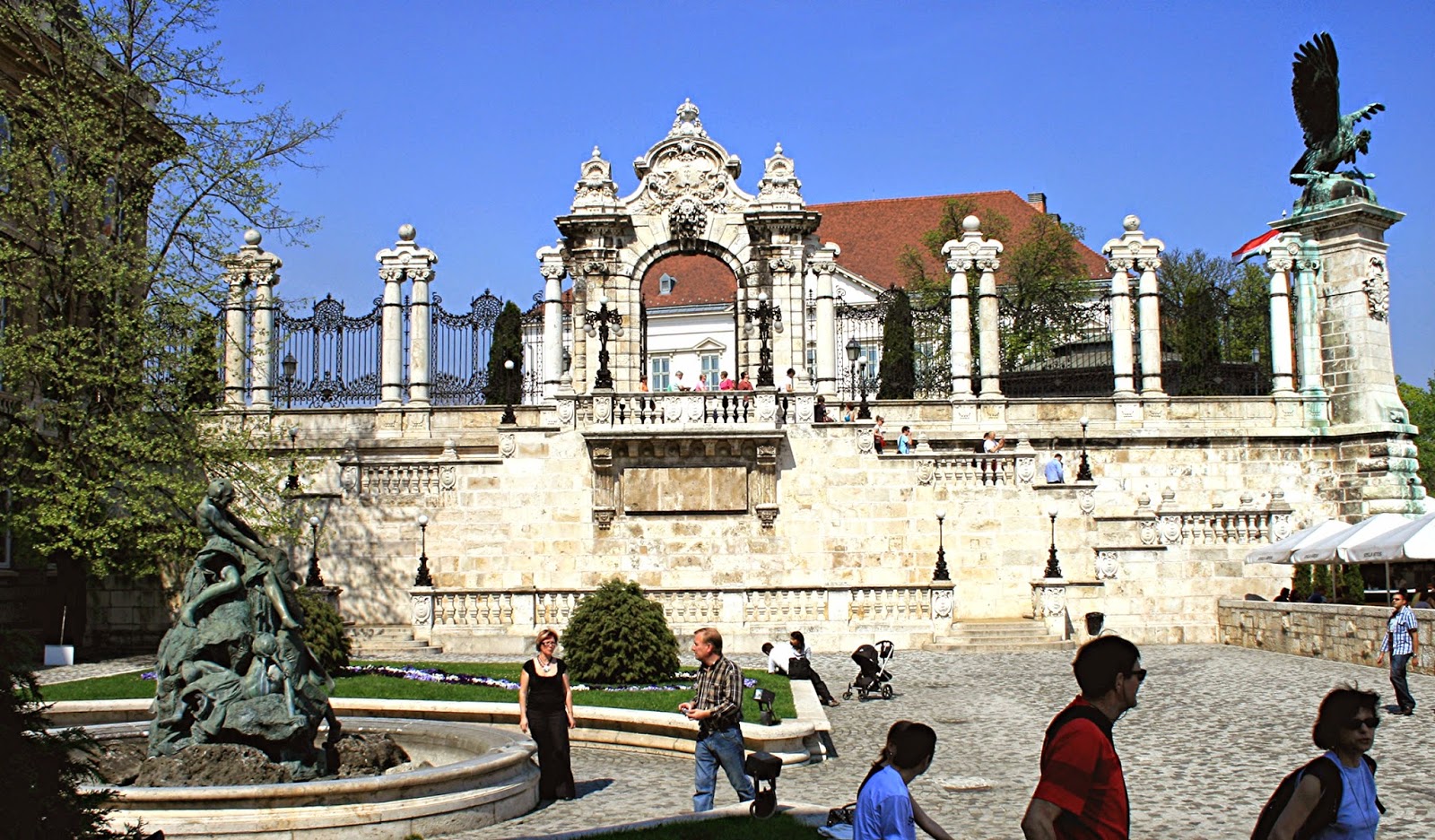 The Buda Palace's frontage, showing the turul statue at top-right of the photograph (public domain) – click picture to enlarge it

It was created by Gyula Donáth in 1904, as was the ornate Neo-Baroque rail surrounding its plinth. Tragically, both the plinth and the rail were seriously damaged during the Siege of Budapest in the 1940s, but were restored in 1981. So too was the broken Kingdom of Hungary coat-of-arms on the plinth. 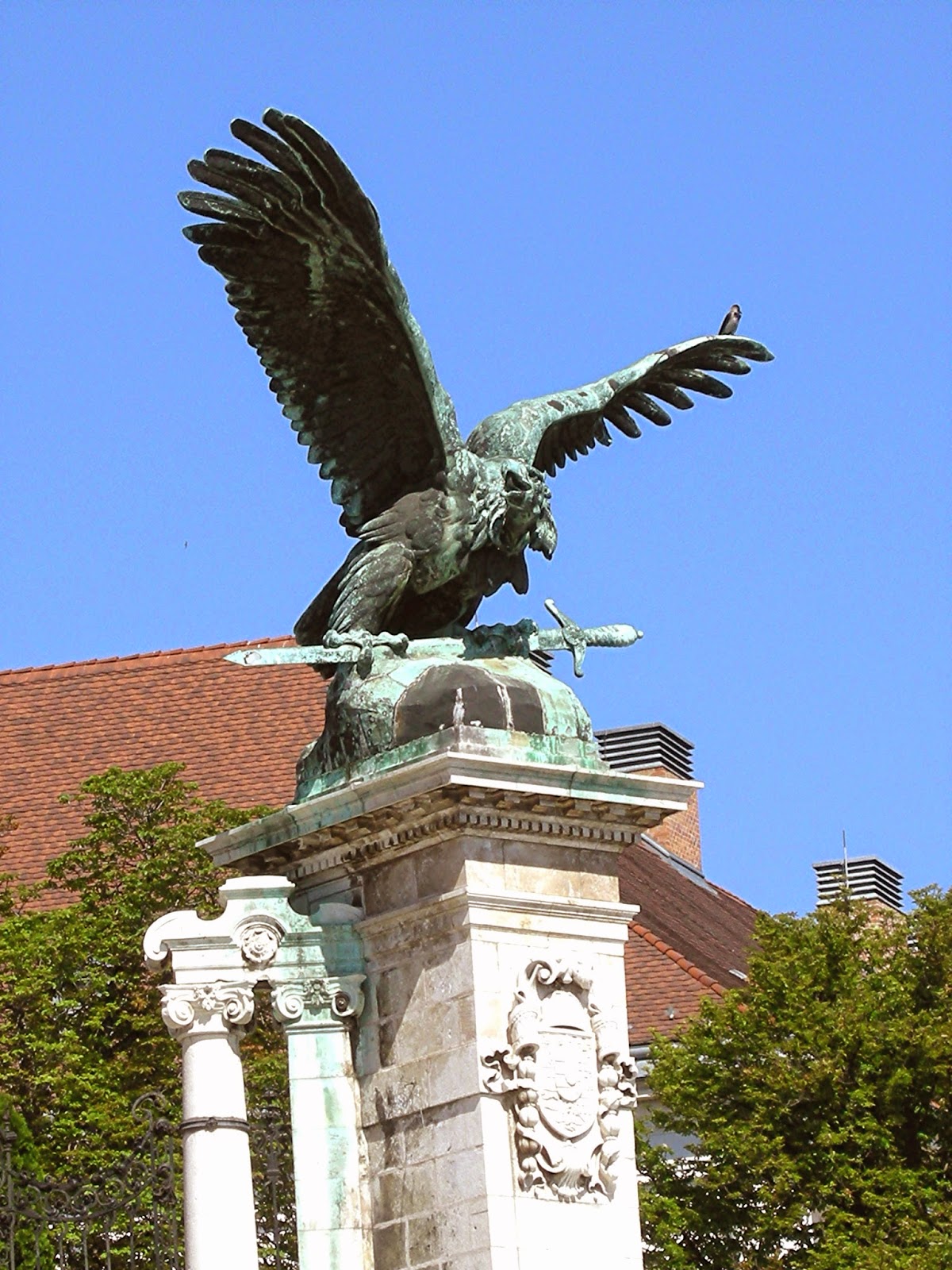 Its appearance as represented by the many statues still in existence indicate that the turul is meant to represent an eagle-like or even a giant hawk-like or falcon-like bird of prey, and is sometimes identified specifically with the very sizeable saker falcon Falco cherrug (certain writers have likened it to a griffin, but the turul is entirely avian in form, lacking any representation of a griffin's leonine aspects). Indeed, 'turul' is an ancient Hungarian word for falcon. 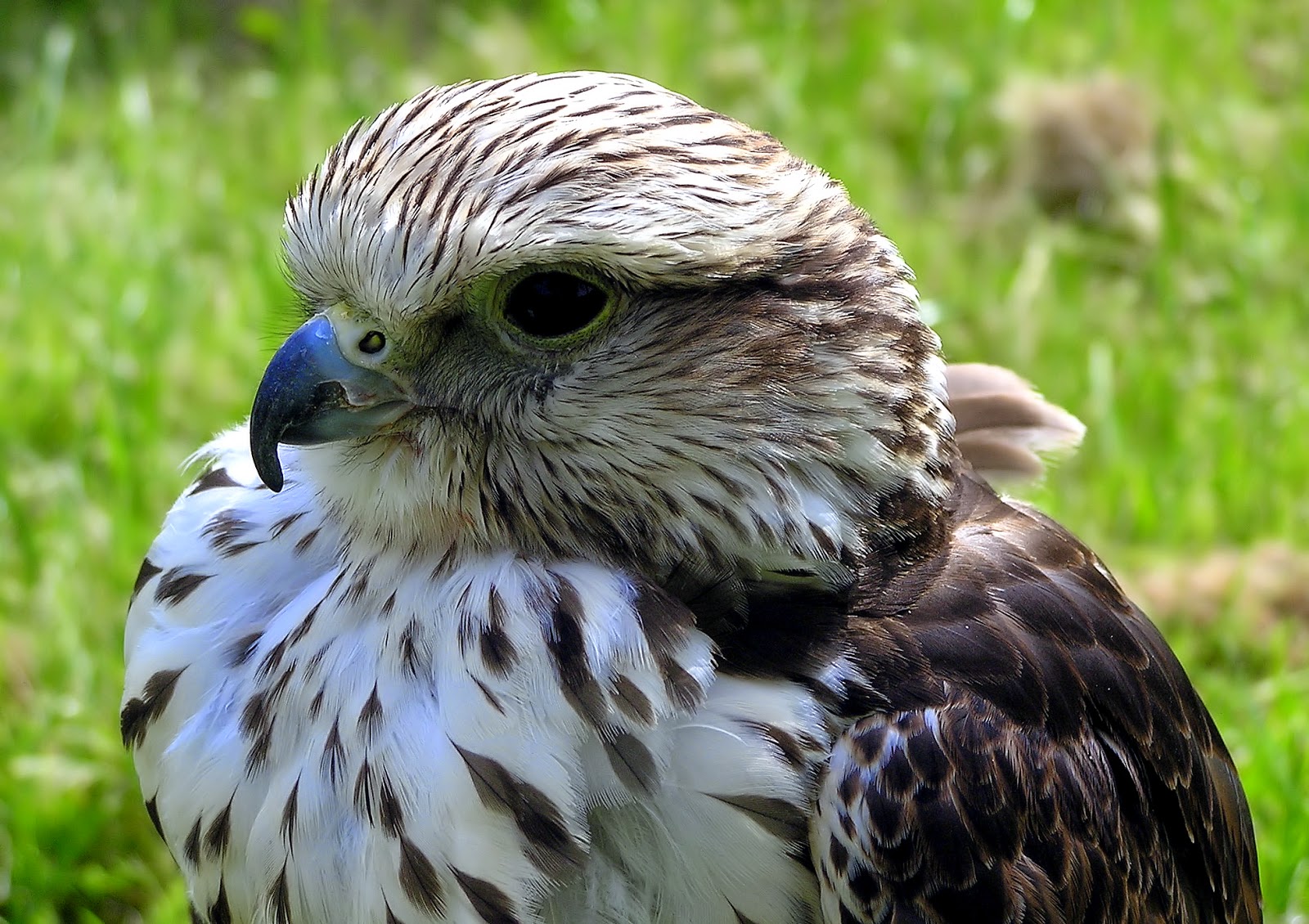 Saker falcon, a popular identity for the turul (public domain)

A divine messenger believed to perch upon the biblical Tree of Life, the turul symbolises the power and will of God and is often depicted carrying God's flaming sword. In addition, it personifies the Huns that gave rise to the Magyar nation, and is said in lore to be the ancestor of Attila himself (who died in 453 AD but is deemed in legend to be the first king of the realm that in later centuries would become Hungary). 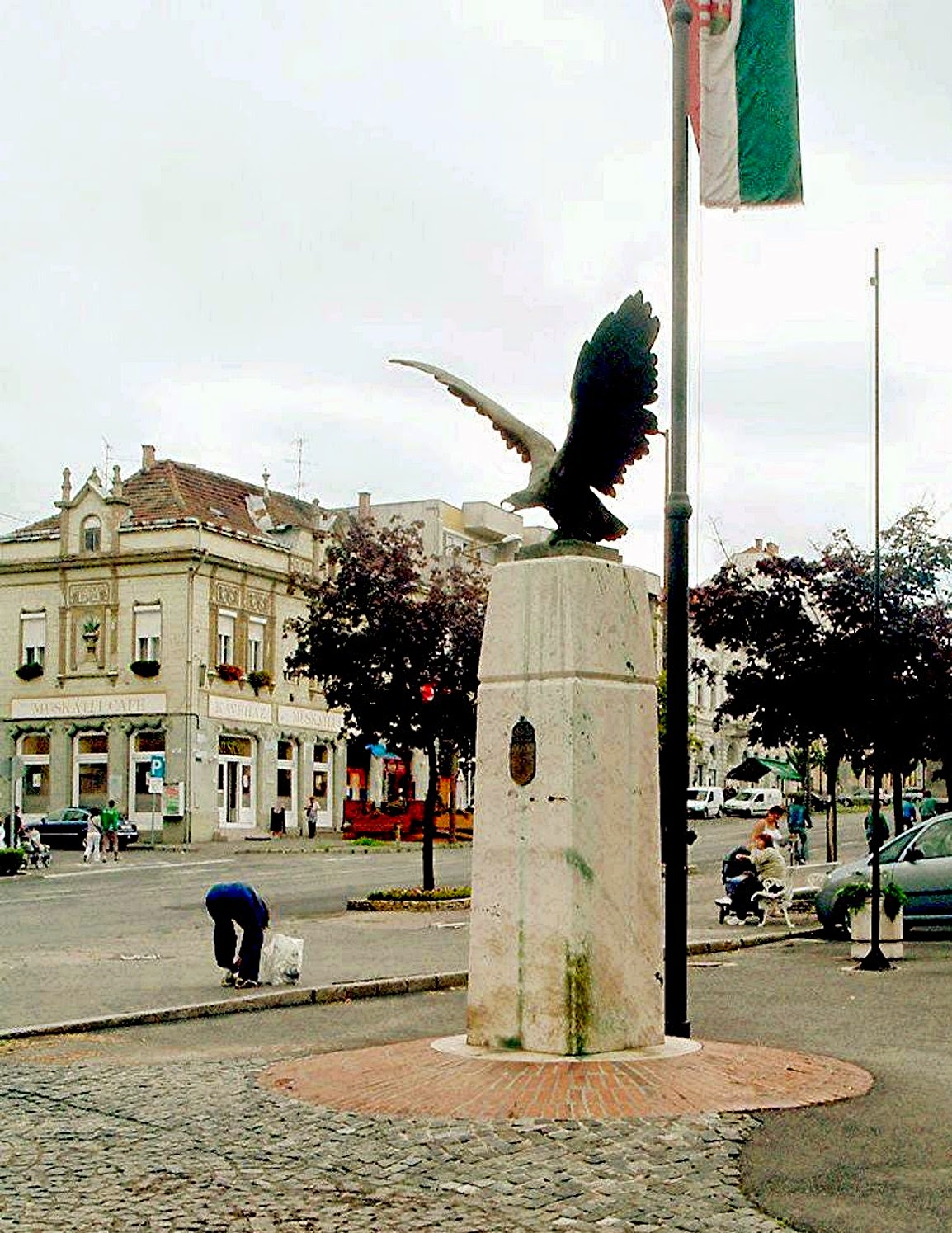 According to 9th-Century Magyar historical mythology, as daughter of Prince Önedbelia of Dentumoger, mother of High Prince Álmos, and wife of Ügyek (descended from Attila the Hun), Emese was the ancestress of the Árpád dynasty – the dynasty that founded the modern-day Hungarian kingdom. She supposedly had a dream in which she was symbolically impregnated by a turul, causing a great stream of crystal-clear water to flow from her womb, transforming into a mighty river that signified her child (the future High Prince Álmos) would give rise to a lineage of great rulers, which he did – beginning with Árpád, celebrated leader of the Magyars, who founded Hungary and whose founding dynasty is named after him. 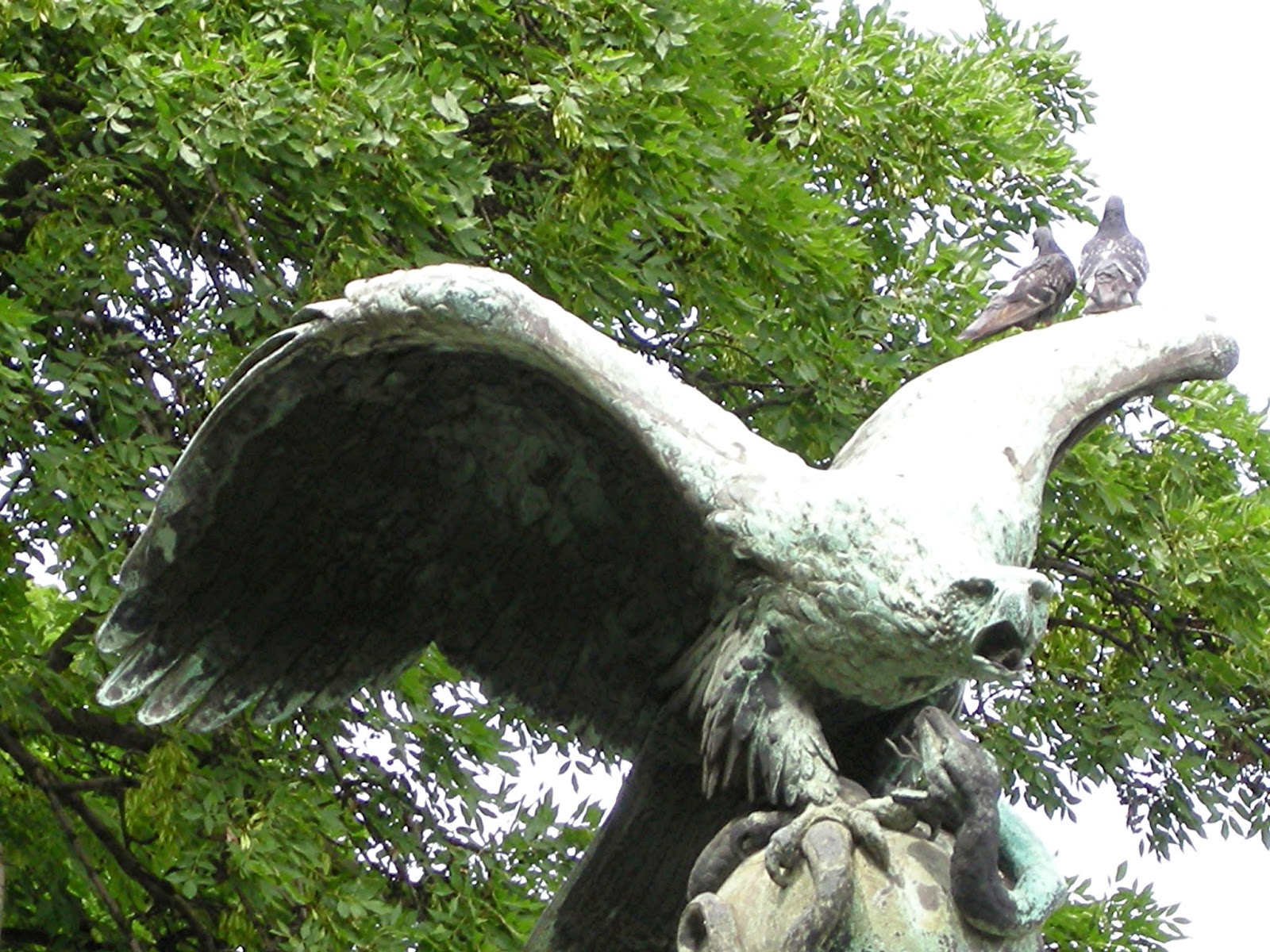 Álmos himself allegedly had a portentous dream too, in which huge eagles came and attacked some horses belonging to the various tribes of which he was leader, but they were saved by a turul that drove the eagles away. Álmos's dream supposedly inspired his leading a migration of his tribes into the land that is now Hungary, with their journey guided according to lore by the turul. 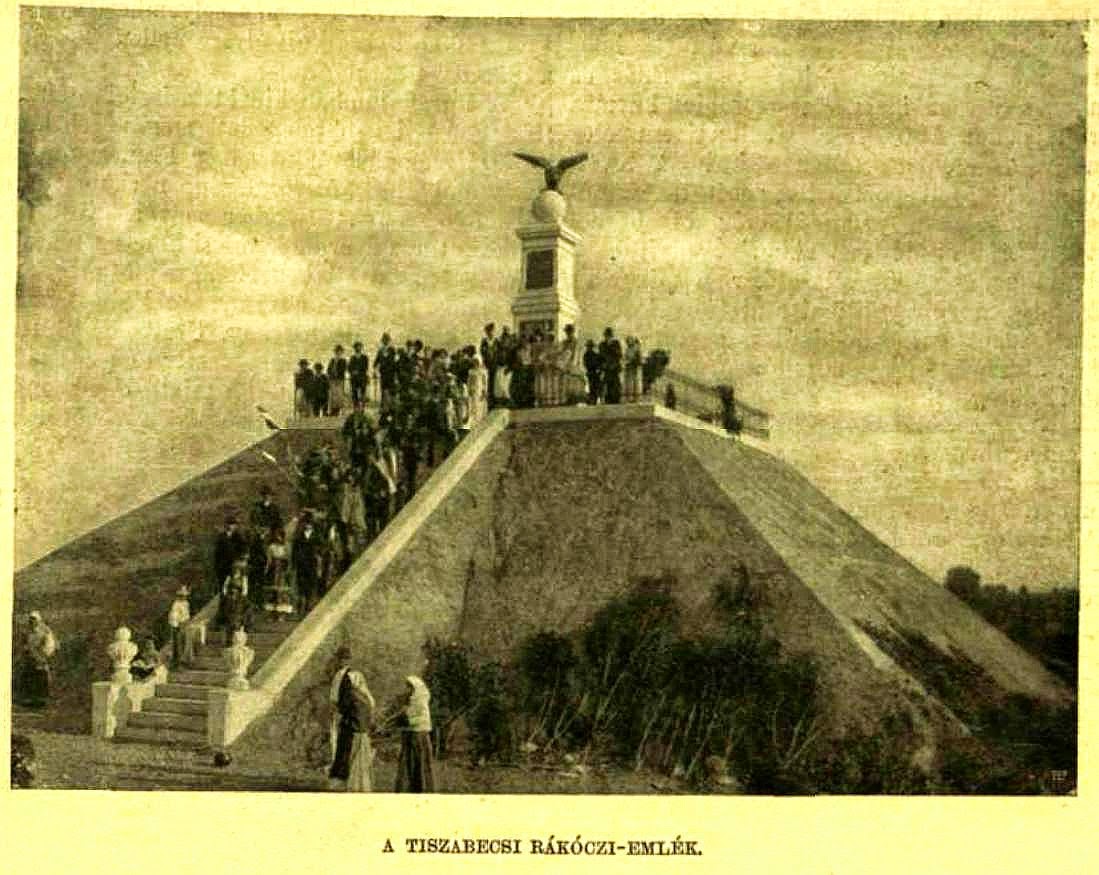 Turul monument in the village of Tiszabecs, eastern Hungary, as depicted in a vintage illustration from 1903 (public domain)

However, the turul is certainly not a legend confined to bygone times, for in addition to the numerous statues depicting it, this highly symbolic, iconic bird even today appears on the coat-of-arms of the Hungarian Army and the Office of National Security. (It was also used as a symbol of radical right-wing student organisations between the two World Wars, but the politics in which this played a part lie outside the scope and intention of the present article.) 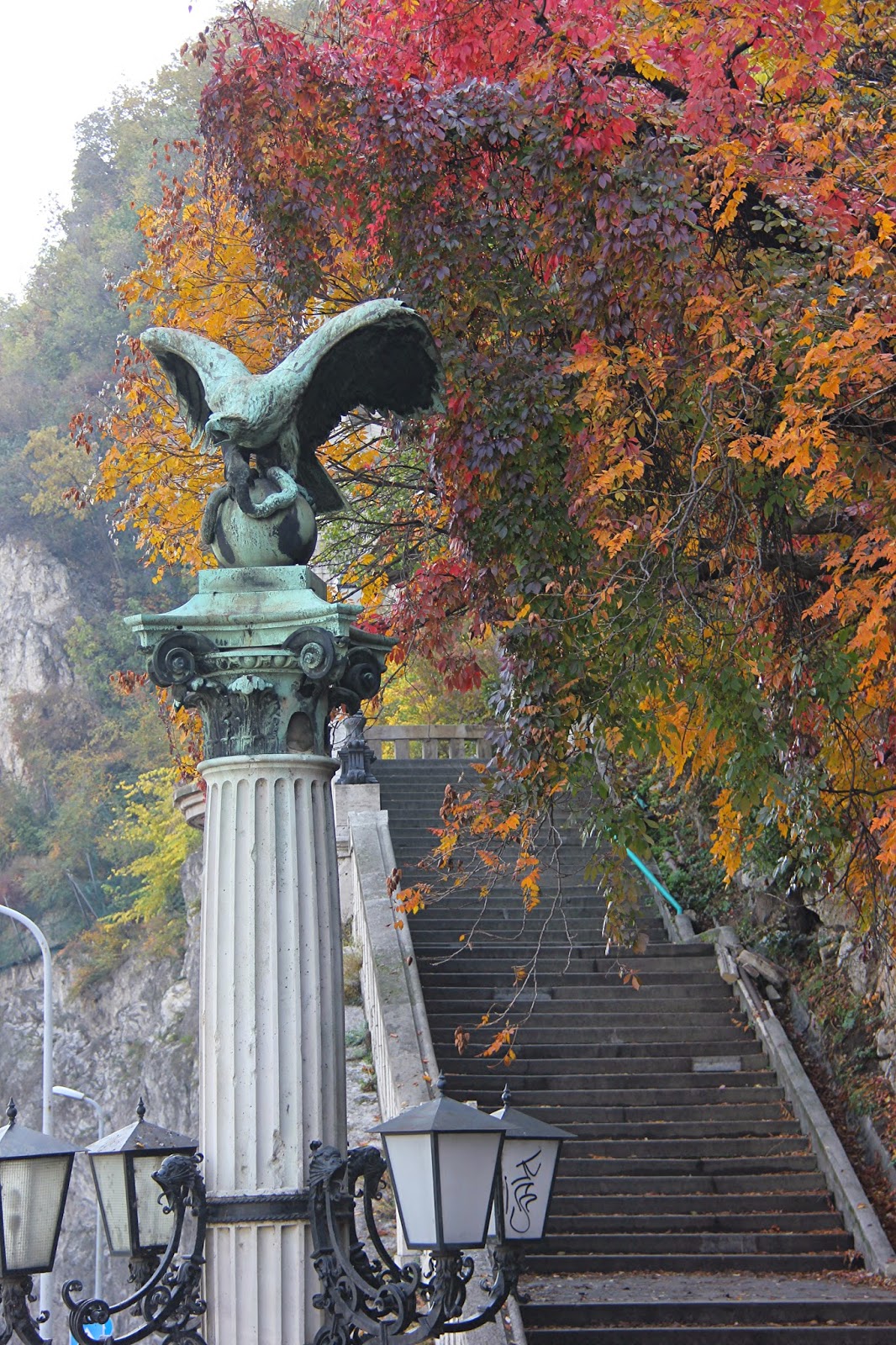 Reflecting upon my fortuitous find of the turul postcard yesterday, which in turn inspired me to research and write this present ShukerNature article today (and thereby bring – I hope – the turul to attention far beyond its traditional Central European domain), I have wondered whether my supposed talent or gift, my 'eye', for locating such items of interest has not vanished, has not become blind, after all. Then again, as I have also reflected, perhaps I had not been alone at the book fair. Perhaps, just like in the good old days, Mom had been wandering around it with me, no longer seen or heard by me, but there beside me nonetheless, just like she had always been, and that it had been she who had guided my fingers when I was idly flicking through the box of postcards, in order for me to find, out of over a hundred tightly-packed cards, the one that she knew would be of interest to me. I hope so, so very much. Thank you, Mom. 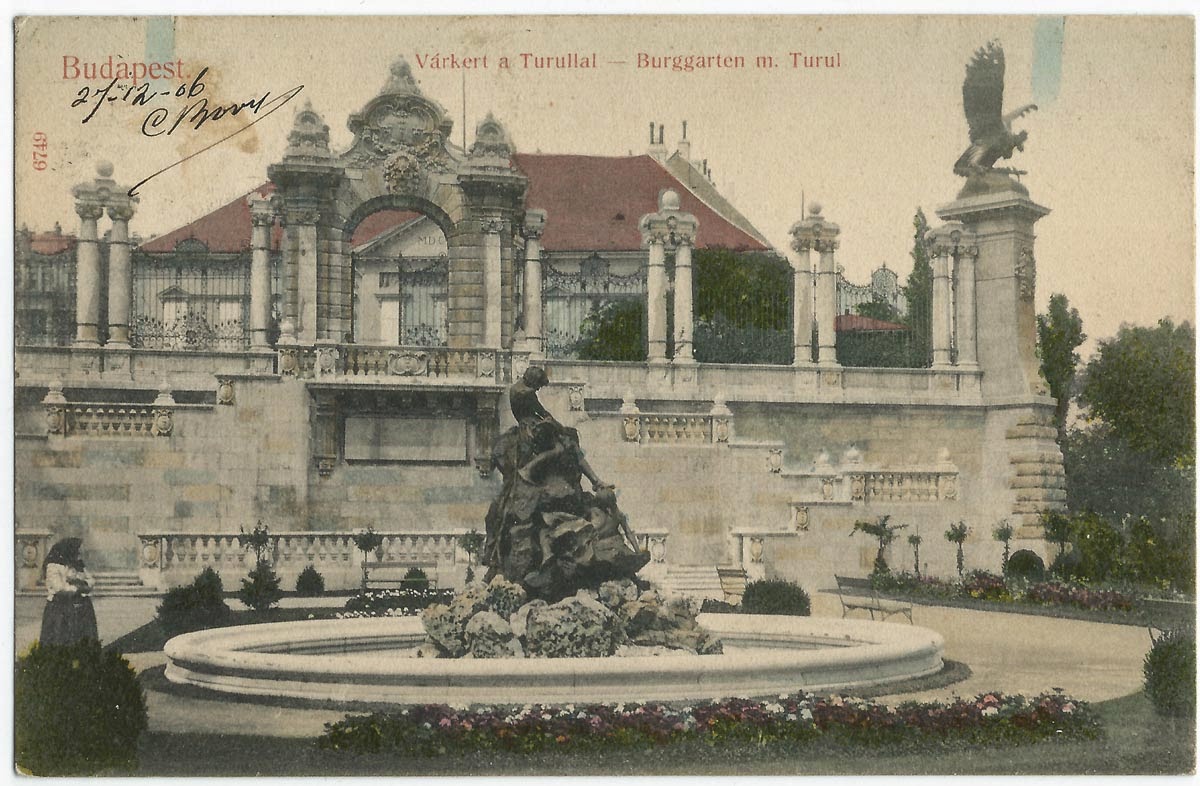 Beautiful vintage hand-coloured picture postcard from 1906 depicting the Buda Palace, with the turul statue at the top-right of the picture (public domain)