Encountering a tiger at close range in the wild is an exciting experience at the best of times. For Methodist missionary Harry R. Caldwell, however, it was more than just exciting – it was truly exceptional, because that is precisely what the tiger in question was. Eschewing the fiery-furred appearance of normal tigers, this extraordinary specimen, sighted in what is now Fujian, China, must have been a truly astonishing creature to behold, because its black-striped coat was deep blue!
It was during the early years of the 20th Century when Harry R. Caldwell first heard of a mystifying, almost preternatural man-eating tiger stalking the forests of southeastern China’s Fukien (now renamed Fujian) province. What made this particular killer so distinctive, however, was the local people’s vehement assertion that it was blue in colour, not the typical blazing, orange-tawny shade of typical tigers. Not surprisingly, Caldwell initially dismissed such claims as native folklore – until, while searching for this creature with his son, John, he discovered on several occasions a number of unquestionably blue-tinged tiger hairs along the mountain trails that the great cat was said to traverse. Nicknaming it Bluebeard, Caldwell decided to hunt down and kill this astounding animal, not only to rid the villages of its bloodthirsty menace but also to prove to science that at least one blue tiger really did exist. 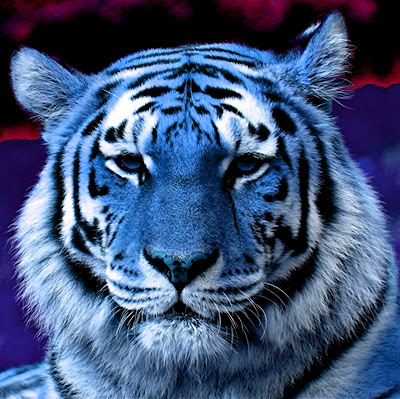 Computer-generated blue tiger (Dr Karl Shuker)
For a time, the legendary Bluebeard eluded Caldwell’s best efforts to track it down, even though, as well as being a missionary, he was also an experienced big-game hunter. In April 1910, however, he finally obtained all the proof that he needed to convince him that a blue tiger was far more than a legend – by successfully luring Bluebeard out of the forest and into view, using a tethered goat. Nevertheless, the blue tiger did not approach closely enough for Caldwell to be certain that he would kill it outright, and so he had to watch impotently as Bluebeard retreated into the forest. However, Caldwell was sufficiently heartened to repeat the ploy at a later date, when, in September 1910, after learning that it had attacked a local child, he and a companion, his native cook Da Da, found themselves sitting in hiding, waiting for Bluebeard to emerge again.
For some time they waited in vain, then, abruptly, Da Da motioned towards what he claimed was a creature, but when Caldwell looked, all he could see was what seemed to be one of Da Da’s fellow natives, dressed in the familiar light blue garment that most of the men in this area wore. As best as Caldwell could see, peeking through the undergrowth, the man appeared to be crouching near the ground, as if picking herbs, so Caldwell shook his head to Da Da. “Man”, he said, and looked back towards the tethered goat. Da Da, however, was not so easily dissuaded. As Caldwell later recalled in his book Blue Tiger (1925):

"Again the cook tugged at my elbow, saying, “Tiger, surely a tiger,” and I once more looked at the object, this time to see what I thought was a man still upon his knees in the trail. I was about to turn again toward the goat when my cook excitedly said, “Look, look, it is a tiger,” and, turning, saw the great beast lengthen out and move cautiously along the trail a couple of rods and then come to a sitting position near a clump of grass. Now focusing upon what I had altogether overlooked in my previous hurried glances, I saw the huge head of the tiger above the blue which had appeared to me to be the clothes of a man. What I had been looking at was the chest and belly of the beast…The markings of the animal were marvellously beautiful. The ground colour seemed to be a deep shade of maltese, changing into almost deep blue on the under parts. The stripes were well defined, and so far as I was able to make out similar to those on a tiger of the regular type."

After finally encountering at close range the mystical blue tiger that had seemed for so long to be little more than a dream, Caldwell was not about to let it fade away as dreams so often do, but as he prepared to shoot, he realised that the tiger was gazing very intently at something below in the nearby ravine. Looking down to find out what it was, Caldwell was shocked to see that the objects of Bluebeard’s attention were two boys gathering bundles of grass and ferns there, oblivious to the tiger watching them. Caldwell realised straight away that the angle at which he would be shooting Bluebeard was such that the wounded tiger would fall directly into the ravine, and its presence there, maddened with pain from the bullet, would severely endanger the children. Consequently, he knew that he had no option but to move his position, in order to shoot the tiger from a different angle and thereby ensure that it did not fall into the ravine, but first he had to draw its attention away from the children.
Very slowly and cautiously, Caldwell stood up, in full view of Bluebeard – and for the next half hour, hunter and tiger stared at one another, neither of them moving a muscle. Clearly, the cat had now forgotten the children, but Caldwell knew that he still had to move position if he were to approach it from a different angle for shooting purposes. And so, reluctantly, he took his eyes off his sky-blue quarry, albeit only for a short time, as he moved away through some undergrowth – but that short time was enough. When Caldwell reached his new position, the blue tiger was no more. Like a Chinese leprechaun, Bluebeard had vanished – disappearing back into the depths of the forest, leaving behind as proof of its reality only its tracks, and also, for Caldwell, the memory of his encounter with what must truly be the most marvellous of all mystery cats. Despite continuing his searches, Caldwell was never lucky enough to catch sight of Bluebeard again.
Needless to say, despite Caldwell’s well-respected status as an eyewitness, not to mention the assorted blue hairs found by him and his son, the existence of a blue tiger may seem, at least from a strictly scientific standpoint, a highly unlikely proposition. Yet, as I discovered when researching this subject while preparing my book Mystery Cats of the World (1989), there is actually a firm genetic foundation for the occurrence of such a creature. 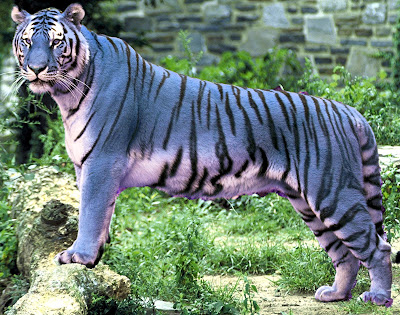 Photograph of a blue tiger as created by me using some photo-magic on my laptop! (Dr Karl Shuker)

Genetically, its unusual coat colouration could be caused merely by the presence of the same two recessive mutant alleles (gene forms) - namely, the non-agouti allele of the Agouti gene and the dilute allele of the Dense Pigmentation gene - that are collectively responsible for the smoky blue-grey coat exhibited by certain ‘blue’ breeds of domestic cat – a coat colouration known as blue dilution. Moreover, there are certain preserved blue-furred pelts on record from at least two species of wild cat – the lynx and the bobcat – confirming that a mutant blue pelage can indeed occur in feline species other than the domestic cat. If there can be blue lynxes and blue bobcats, why can’t the same combination of mutant genes yield a blue tiger…or two?
The only problem with this 'blue dilution' identity for the blue tiger is its black stripes, which wouldn't be so dark if the latter identity were correct - unless of course the stripes were not actually black but only appeared so to Caldwell due to lighting conditions at the time of his sighting; or, if they were genuinely black, are of polygenic creation, i.e. they are due to the action of modifying genes functioning independently of the combined effect of the non-agouti and dilute alleles.
Whatever the answer, the blue tiger must surely be the most aesthetically appealing cryptozoological cat ever reported.
Blue tiger in profile (William Rebsamen)

Indeed, Bluebeard may not even have been unique. I have learnt of “a blue-grey tiger with black stripes” having been reported in a Chinese town given as Lung-tao. This locality may either be Lungyao, a town in southwest Hopeh province, or (taking into account Chinese pronunciation and the new phonetic convention for spelling Chinese names) Longdu, in China’s Jiangsu Sheng province.
Furthermore, an American correspondent, Bill McKee, informed me in 2001 that while serving with the US army in Korea during the Korean War, his father, Lt Col. James McKee, claimed to have seen a blue tiger in the mountains one morning in December 1952, and that the locals were also aware of it. His father was stationed in central Korea, near what is now the Demilitarised Zone, and his sighting occurred about a mile to the east of the Mong Don Ni Valley.
The two spectacular blue tiger paintings included here were specially prepared for me by highly acclaimed wildlife artist William Rebsamen, and I am both proud and honoured that the original, signed version of the blue tiger profile painting was kindly given to me as a gift by Bill a few years ago - thanks Bill! 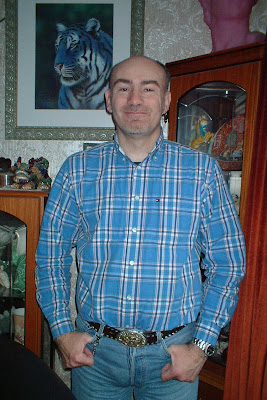 For more information on blue tigers and other controversial colour morphs of big cats, be sure to check out my forthcoming full-colour book, Cats of Magic, Mythology, and Mystery, due to be published by CFZ Press in late 2012.