In my book Extraordinary Animals Revisited (CFZ Press: Bideford, 2007), I devoted a chapter to cryptozoological and other controversial insects and related terrestrial arthropods. Recently, I learnt of two fascinating additions to this select company: 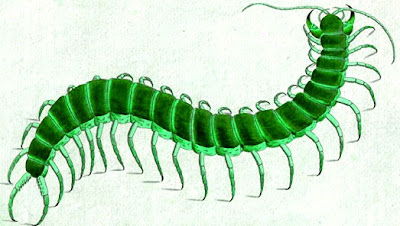 The upah envisaged as a green centipede (Dr Karl Shuker)
OOPS, IT’S THE UPAH – SUMATRA’S GIANT SHRIEKING CENTIPEDE!
Never heard of this cryptid before? Neither had I until I read explorer-ecologist Jeremy Holden’s illuminating account of it in the August 2009 issue of BBC Wildlife Magazine. Several years ago, while he had been visiting a small village in western Sumatra, the locals had solemnly revealed that the jungle creature they feared the most was a giant 1-ft-long tree-dwelling centipede with a thick ghostly-green body, an agonisingly painful bite, and – most extraordinary of all - the unique ability (for a centipede) to shriek or yowl like a cat. Although initially sceptical of such a bizarre beast, which the locals termed the upah, several weeks later while walking through the forest Jeremy suddenly heard a loud cat-like cry coming from high up in the canopy, followed by a rattling ‘churr’. He tracked the precise location of this eerie sound, using his binoculars, to a hollow branch, and his native guides excitedly confirmed that this was indeed the upah calling, but the creature itself remained unseen. More recently, however, while walking through Kerinci Seblat National Park with the eminent birdwatcher Frank Lambert during a return trip to Sumatra, Jeremy heard the very same cry – the cat-like yowl, then the rattling churr – once again emanating from the canopy. Sadly, however, the true originator of these sounds, although certainly elusive, proved to be something rather less exotic than a vocalising centipede. Instead, as instantly recognised by his birder companion, the species responsible was none other than the Malaysian honeyguide Indicator archipelagicus, a bird famous in ornithological circles for being much easier to hear than observe. Faced with such an anomaly – a creature often heard but seldom seen - it is understandable, perhaps, that the villagers’ imagination would, down through the ages, ultimately conjure up a truly dramatic yet wholly fictitious monster to explain it. There’s a lesson in here for cryptozoology somewhere! BBC Wildlife Magazine, vol 27, August 2009.

THE TIGER THAT THINKS IT'S AN ANT!
In the March 2009 issue of BBC Wildlife Magazine, TV explorer-presenter Steve Backshall reveals his close encounter with what appears to have been a very remarkable yet previously-undocumented and still scientifically-undescribed insect. While filming the documentary ‘Expedition Borneo’ in 2006, at one stage Steve found himself hanging precariously by his fingers from the edge of a steep vertical cliff face rising out of a remote hitherto-unclimbed canyon called Imbak. And while there, he was startled to see what looked on first sight to be a huge bright red ant, the size of a baby’s finger and the colour of molten lava, scuttling speedily along the rocks around his fingers. Closer observation, however, revealed to his amazement that this 'ant' was in fact an extraordinary, totally novel ant-mimic. Namely, a species of tiger beetle whose abdomen was greatly attenuated in an hour-glass shape, thus deceptively imitating the familiar ‘waist’ of genuine ants. Moreover, this imposter was actually hunting the smaller black ants milling around, seemingly tricked into complacency by their persecutor’s ant-like disguise. Because of his predicament, however, Steve was unable to capture this singular specimen, but when he eventually managed to extricate himself (by which time of course his veritable beetle in ant's cuticle was long gone) and described it back at camp to expedition entomologist George McGavin, George duly confirmed that nothing like it had been described before, and that it was therefore certainly a new species! BBC Wildlife, vol 27, March 2009.
Posted by Dr Karl Shuker at 00:09