EXPOSING THE CON IN ANACONDA - OR, HOW I MONSTERED A MONSTROUS SNAKE HOAX 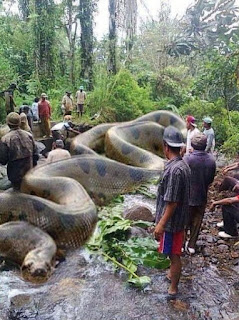 The online photo of a supposed gargantuan anaconda shot in Africa's Amazon River !! (photo-manipulated photograph's creator(s) unknown to me)

Less than a month after debunking a trio of quasi-coloured mock pythons on ShukerNature (click here), I was able to do the same to an even more outrageous hoax of the constrictor kind, this time involving a much-manipulated photograph of a green anaconda Eunectes murinus.

According to the record books, this anaconda species, the biggest known to science, rarely exceeds 20 ft long. However, many reports have been filed concerning a truly colossal form of anaconda supposedly existing amid the vast jungle swamplands and lagoons of Brazil and elsewhere in South America – the so-called sucuriju gigante – that allegedly far exceeds that size. In 1907, the subsequently-lost explorer Lieut.-Col. Percy Fawcett reputedly shot an estimated 62-ft specimen as it began to emerge from Brazil's Rio Abuna but couldn't salvage its monstrous form, and there have even been a few photographs made public that allegedly portray killed but never-preserved specimens of it (click here for my ShukerNature coverage of some examples). Could the subject of this present ShukerNature blog article be another such picture? I don't think so! 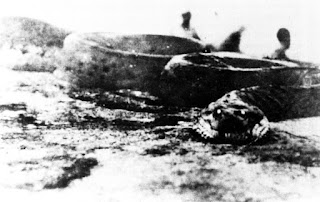 Photograph of a supposed 130-148-ft-long sucuriju gigante killed in or around 1932 at Manaos, Brazil, after having been captured alive (public domain)

During the late evening of 1 August 2015, I saw the startling photograph opening this ShukerNature article posted on Facebook friend Simon Hicks's 'Zen Yeti' FB group page. If it were genuine, the slain anaconda featured in it would be truly gargantuan – but was it genuine? The oddly-contorted, compressed coils of the snake didn't look natural, but any specimen that so dwarfed the humans standing around it (yet standing around it in a remarkably unconcerned, disinterested manner, I might add, for persons supposedly in such close proximity to so immense a snake, dead or otherwise) is always going to attract suspicion anyway.

It was linked to the timeline of one Rakesh Mintu Bjp, and when I clicked that link it took me to an annotated version of the photo on this person's timeline. I also checked online outside Facebook, and the photo and annotation had already appeared on many other websites during the past month or so. Consequently, neither had originated with Bjp – he had merely posted one such copy on his FB timeline, as had several other persons, I discovered, which means that the originator of the photo and annotation is currently unknown. Anyway, this is the annotation:

"World's biggest snake Anaconda found in Africa's Amazon river. It has killed 257 human beings and 2325 animals. It is 134 feet long and 2067 kgs. Africa's Royal British commandos took 37 days to get it killed."

Even if the photograph hadn't seemed dubious before (which it had!), after reading the garbled nonsense above I could now have no doubt whatsoever that it was a blatant, and exceedingly silly, hoax. And how did I know this? Where to begin?!!

Well, first and foremost: unless someone has sneaked it into Africa without telling me, the Amazon River is famous for being the largest in South America.

Secondly: unless someone had thoughtfully embedded a veritable 'kill-o-meter' inside the anaconda, how could anyone state so precisely how many humans and animals it had killed?

Thirdly: its length is more than 4 times the maximum confirmed length for any modern-day snake, and more than 3 times the maximum estimated length for the longest snake ever known from planet Earth – Titanoboa cerrejonensis, from the Palaeocene epoch in what is now Colombia, which is believed to have attained a maximum length of around 42 ft and a weight of around 2500 lb (1135 kg – only about half that of the photo's mega-anaconda). 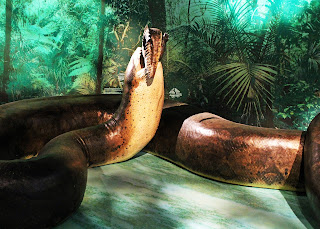 Fourthly: there is no such regiment as Africa's Royal British commandos.

Fifthly: how on earth could it take 37 days to kill this snake, huge though it would have been if real? A concerted artillery or machine-gun salvo to its head would surely have dispatched it in a far shorter time period.

And sixthly (if such a word exists!):  regardless of how long it took to kill this alleged ophidian behemoth, where are the wounds, the signs of how it met its end? It looks extraordinarily, inexplicably, unbloodied - indeed, entirely unmarked, unwounded in any way - to my eyes.

Just after midnight on 2 August, I posted on my 'Journal of Cryptozoology' FB group's page a link (click here - but only accessible to members of my FB group) to the photo as it appeared on Rakesh Mintu Bjp's timeline.

All that was now needed was the original, non-manipulated anaconda photograph to bring this sorry snake saga to a well-deserved end, and, after spending all of 2 minutes online using Google Image after having posted the fake photo's link on my 'Journal of Cryptozoology' page, I duly uncovered it, here, on a page dealing with anacondas, from a Brazilian biology website entitled 'Bio Curiosidades'. If you scroll down the page, it is the fifth photo from the top of the page. 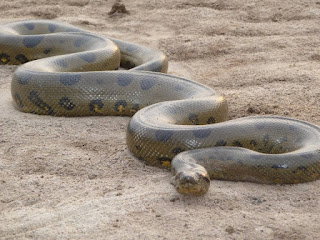 The fake photograph had been produced by person(s) unknown simply by horizontally-flipping the above, original photograph to create a mirror-image version of it, then compressing it horizontally to yield those oddly-shaped coils, then either superimposing from a second photo the people and background around it, or, more probably, superimposing it upon a second photo containing the people and background.

After finding this photograph on the 'Bio Curiosidades' website, I duly posted on my 'Journal of Cryptozoology' FB group page a link to it, beneath my previous one linking to the fake photo. Case closed.

Thus endeth the tale of the giant anaconda that was merely a giant con. 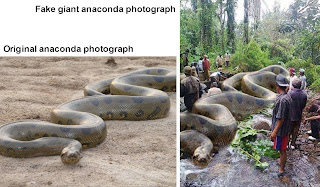