My late mother, Mary Doreen Shuker, was a short-hand typist and secretary throughout her working life, and I fondly recall how I used to joke affectionately with her that this made her a secretary bird - the name given to that elegant and endemic African bird of prey known scientifically as Sagittarius serpentarius. Although this is a very familiar species, much less familiar is that it has a cryptozoological counterpart, reported far from African shores - in the Philippines, no less. So here, dedicated with all my love to my dear little Mom, is my investigation of this very intriguing Asian mystery bird.

Imagine, if you will, a grey-plumaged hawk that for some unexplained reason has been invested with the long slender legs and neck of a stork, bestowing upon it a total height of 3.5-4 ft when standing upright. Combined with these is a pair of extremely lengthy, black-pinioned wings attaining a span of 7 ft when fully extended, plus an elegant, elongated tail. Lastly, added almost as an absurd afterthought (judging from its somewhat disorderly appearance), is a crest of drooping, black-tipped feathers that conjure up the incongruous image of a office scribe with an untidy sheaf of quill pens protruding from behind his ear!

The head of a secretary bird, showing its diagnostic crest (Kevin Law-Wikipedia)

The product of this exercise in creature composition will probably be a surprisingly accurate reconstruction of a truly singular species of African bird, known scientifically as Sagittarius serpentarius - the secretary bird.

Named after its manner of stalking on foot in long, measured strides like an archer preparing to shoot his arrows, and also after its passion for attacking and devouring serpents great and small, only one modern-day species of secretary bird is currently recognised. Back in 1835, however, English zoologist William Ogilby attempted to distinguish three - and, in so doing, created a very curious if little-known cryptozoological enigma. 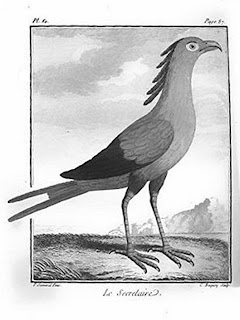 One of his three species comprised the secretary bird populations of eastern, central, and southern Africa; and another constituted those from western Africa's Senegambia region. The third, and by far the most unexpected, conversely, was based upon an illustrated description by French naturalist Pierre Sonnerat within his Voyage a la Nouvelle-Guinée (1776) of an alleged variety of secretary bird existing very much further afield - in the Philippines!

As there are certainly no secretary birds indigenous to these (or any other) southeast Asian islands, the least contentious answer to this zoogeographical riddle is that Sonnerat's description must have been founded upon specimens brought there by man, probably as exotic exhibits (though no evidence for any such introductions is currently known to me). To my mind, however, there is another possible explanation - rather more remote, but much more interesting from the standpoint of ornithological discovery.

The largest bird of prey known to be native to the Philippines is a magnificent crested species called Pithecophaga jefferyi, the monkey-eating or Philippine eagle (traditionally thought to be closely related to the Amazonian harpy eagle, but now, following DNA comparisons, revealed to be akin to the snake eagles). Sonnerat's description (and inaccurate depiction) of his supposed Philippine secretary bird contained certain morphological characters that set it well apart from the bona fide African version, yet which recalled this very impressive Asian eagle.

For example, Sonnerat recorded that the feathers constituting the lower portion of the Philippine secretary bird's crest were longer than those of its upper portion. This is the exact converse of the crest structure in Africa's Sagittarius, but is suggestive of Pithecophaga. Similarly, whereas the central feathers are the longest ones in the tail of Sagittarius, Sonnerat claimed that the outermost feathers were the longest ones in the tail of its Philippine counterpart - a condition agreeing once again with that of Pithecophaga.

From these and other correspondences, it is possible that Sonnerat's description of what we now know to be a non-existent Philippine secretary bird was inspired at least in part by vague, second-hand accounts of Pithecophaga, the Philippine eagle. 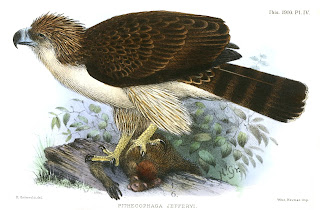 Colour engraving of a Philippine eagle

If this is so, it is an especially interesting and cryptozoologically significant case (albeit until my investigations of it a long-forgotten one), because at the time of Sonnerat's report Pithecophaga was still undiscovered by science. Not until it was formally described and named just over a century later by W.R. Ogilvie-Grant in 1896 did the existence of this spectacular species finally become known to the ornithological world. And certainly, if the so-called Philippine secretary bird is indeed one and the same as the Philippine eagle, it would not be the first time that accounts of a creature have actually appeared in the literature long before that creature's reality has been recognised, and its true identity unveiled, by science.

Speaking of out-of-place secretary birds: it is fully confirmed that in 1832 this snake-eating species was introduced onto the West Indian island of Martinique, in order to eliminate the highly-venomous yellow fer-de-lance Bothrops (=Trigonocephalus) lanceolatus. However, it failed to establish itself here - but this failure is probably no bad thing. After all, as the secretary bird is partial not only to snakes but also to small birds, especially ground-dwelling types, its permanent presence on Martinique may well have endangered this island’s native avifauna - in turn affording another example of the disastrous events that can be set in motion when humankind attempts to meddle with an ecosystem's natural balance.

This ShukerNature blog post is excerpted and updated from my book Extraordinary Animals Revisited (2007). 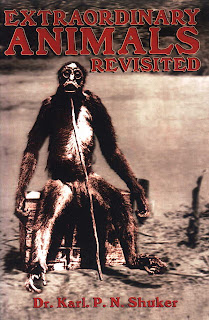