THE DRAGONS ARE COMING! - FIRST PREVIEW OF MY LATEST, 20TH BOOK 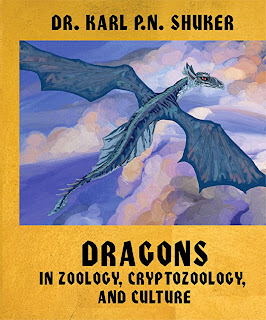 Hot on the heels of Mirabilis comes my latest, 20th book – Dragons in Zoology, Cryptozoology, and Culture, scheduled for publication next month by Coachwhip Publications (Greenville, Ohio), just in time for Christmas! Above is a sneak preview of its cover, which includes one of several spectacular examples of dragon artwork very kindly prepared specifically for it by extremely talented artist Thomas Finley – thanks, Thomas!

As soon as it is available on Amazon, I'll add a link here (USA) and here (UK) – so keep checking back! Meanwhile, enjoy the additional examples included here of Thomas Finley's beautiful dragon artwork ((c) Thomas Finley), excerpted from my book, which contains more than 170 illustrations in total (some by other celebrated artist friends of mine, such as Anthony Wallis, Richard Svensson, Rebekah Sisk, William Rebsamen, Andy Paciorek, Hodari Nundu, Tim Morris, Pat Burroughs, and Markus Bühler), and including also the following pictures: