Salvator water monitors - could the afa be an unknown giant relative?

One of the world's most obscure cryptozoological reptiles is the afa - a Middle Eastern mystery lizard briefly reported by explorer Sir Wilfred Thesiger in his book The Marsh Arabs (1964).

Also known as the Madan, the Marsh Arabs inhabited the marshlands of the Tigris and Euphrates rivers in the south and east of Iraq, and along the Iranian border – formerly a vast area of wetland covering more than 5.8 square miles. According to Thesiger, who had lived among them intermittently for eight years during the 1950s prior to the Iraqi revolution of 1958, the canoe-borne Madan claimed that the marshes at the mouth of the Tigris in Iraq was home to a monstrous lizard, which they termed the afa. 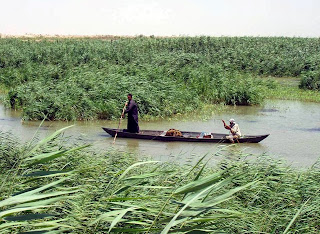 Marsh Arabs in southern Iraq's marshlands - the abode of the afa

Little else appears to have been documented concerning it. As various species of varanid or monitor lizard are native to this region of Asia Minor, however, it is plausible that the afa may be one too, albeit bigger than those formally recognised by science here - and hence either an unknown giant species, or based upon sightings of extra-large specimens of some known species.

Sadly, however, the question of the afa's taxonomic identity may be nothing more than academic nowadays. This is because following the Gulf War in 1991, the Iraqi government initiated a major programme to divert the flow of the Tigris and Euphrates Rivers away from the marshes in retaliation for a failed Shia uprising among the Arabs living there. This not only eliminated the Madan's food sources, forcing them to move elsewhere, but also turned the marshes themselves into a desert.

Consequently, the afa may well have been exterminated, especially if it were primarily aquatic, as I am not aware of any post-1991 reports alluding to it. If any ShukerNature reader is aware of any such reports, however, I'd be very interested to receive details.