JONATHAN LIVINGSTON SEAGULL - DARE TO BE DIFFERENT, DARE TO DARE! 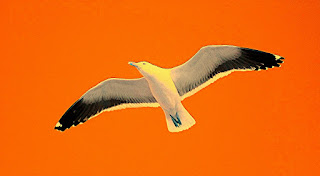 On wings of inspiration and life (© José Moutinho/Wikipedia – CC BY 2.0 licence)

The book of the film, as they say, took Bach eight years to complete.

He maintains that the story came to him in a vision.

"I was walking home one night in 1959. I heard a voice say 'Jonathan Livingston Seagull.' I was scared to death and ran home, locking the door behind me," said Bach.

"As I sat on the bed a bright vision of a seagull flying alone suddenly appeared. The bird started talking about his life.

"I wrote down every word he told me. Then he disappeared.

"I thought I had a great story to write. But I realised I only had half of it. I could not finish it.

"It was eight years before the seagull returned and talked to me again. I got the rest of the story, dug out the old manuscript and finished the book."

It was during the late 1970s as a university undergraduate zoology student when I first read Richard Bach's bestselling short novella Jonathan Livingston Seagull, originally published in 1970, followed three years later by a movie version. The novella was truly magical and inspirational, greatly influencing my outlook on life ever afterwards, and I have re-read it many times since then. 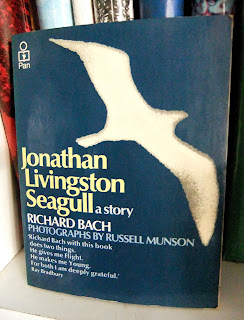 Yet until last night I had never seen the movie version, due not only to it being released several years before I'd read the book but also to it being neither a box-office nor a critical success and consequently sinking without trace afterwards. Many years later, I happened upon this long-forgotten film in VHS videocassette format, which I duly purchased, but although I fully intended to watch it, somehow I never did - probably put off by the negative reviews that it had received when released - until last night, and what a revelation it proved to be. 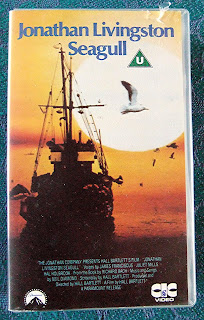 Live-action throughout, the movie stays close both in content and in style to the book, telling the story of a gull named Jonathan Livingston Seagull who is not content simply to be one of the flock, to be satisfied with mediocrity, suppressed by conformity, and never to exhibit any trace of individuality. Instead, fascinated with flight, he pushes himself both physically and spiritually to fly ever faster and soar ever higher, to see the whole world, not just the very limited portion of it occupied by his flock. Unfortunately, however, this does not endear him to the flock's Elders, who initially issue him with stern warnings to conform, not to stand out from his fellow gulls, but, when Jonathan chooses to ignore them in his Olympianesque quest to be faster, higher, without equal, formally banish him from the flock forever, an outcast alone and unprotected thereafter - but also free at last to pursue his goals, his dreams, his ambitions, unhindered and unsuppressed.

After travelling to parts of the globe never visited by other seagulls, such as deserts and snowy forests, and surpassing all of his previous speed and altitude records, in the movie's second half Jonathan is visited by some radiant, shimmering-white gulls from a higher plane of existence, semi-divine and capable of flying feats far exceeding even his own awesome abilities, but who are nonetheless very impressed by what he has achieved and by his refusal to allow his individuality to be denied by the flock. So they become his teachers, his mentors, enabling Jonathan to achieve ever greater successes in his quest for perfection, until eventually he in turn becomes a teacher, and with a small flock of acolytes, including one particular protégé named Fletcher, he returns to his old flock and tries to teach them what he has learnt. However, the repressive Elders are outraged and command the flock to kill him and his followers. So they fly away, but not before their words have incited in a few members of the flock a passion to discover their own unique selves and uncover their own unique abilities. 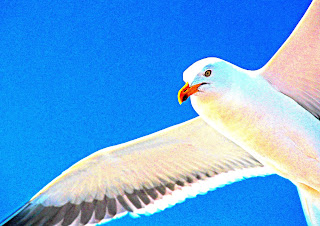 The cinematography of this very unusual yet truly evangelical movie, entirely bereft of humans but featuring breathtaking footage of gulls both in flight individually and gathering together in cacophonous bickering flocks to seize fishes drawn up in trawlers' nets, is absolutely stunning even today, almost 50 years after this movie was first released, so just how incredibly spectacular it must have looked on the big screen in its cinema release back in 1973 can scarcely be imagined. And on top of all of this is an extremely evocative, melodic soundtrack whose music and songs were written and performed by none other than Neil Diamond, and which achieved commercial success worldwide following its release in 1974. 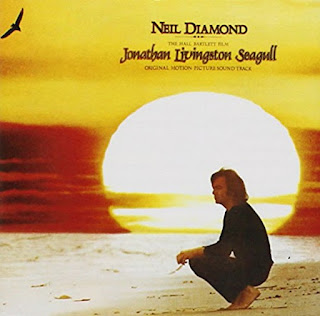 The soundtrack album from the movie version of Jonathan Livingston Seagull, with all music and songs composed and performed by Neil Diamond (© Neil Diamond/Columbia – reproduced here on a strictly non-commercial Fair Use basis for educational/review purposes only)

With so much going for it, what went wrong - why did this marvellous movie flop? To my mind, the only tenable answer is that not a great deal happens in it - as can be seen from my above précis of its plot, a plot that is as much metaphorical as it is literal, just as it is in the book. But whereas the book is very short (just 93 pages in total, and which include many full-page illustrations), the movie was originally 120 minutes long (cut to 90 minutes in the video version that I watched), and whereas I absolutely loved its beautiful panoramic shots, exquisite scenery, and extremely tranquil ambience throughout, not to mention its plot's inspirational theme and stirring music, to audiences more accustomed to action and adventure it may conceivably have come across as uneventful to the point of being dull. (Indeed, presumably fearing such an outcome, the movie's makers insisted upon inserting a scene in which Jonathan is attacked by a hawk for invading what the hawk considers to be its very own section of sky - a scene that does not appear in the book and which Bach reputedly hated.)

Yet if this opinion of mine is indeed correct, it means that such audiences entirely misunderstood what this magical film (and book) is all about. It is NOT in any way, shape, or form a conventional animal movie, simply portraying the adventures or life story of some cute creature. Instead, it is a glorious pictorial paean to individuality – to be yourself, not subdued or repressed by the strictures of society to conform, but instead to pursue your own dreams, to create and follow your own pathway through life, ever striving to achieve your own goals, neither hindered nor lured by mediocrity or mundanity. Dare to be different, dare to be daring and uncaring of criticism or jealousy from those who cannot or will not accept anything that challenges their rigid, inflexible status quo, their blinkered worldview, their comfortable conservatism. 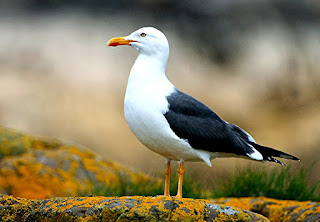 Watching this wonderful, life-affirming movie, I recalled so vividly how my mother Mary Shuker had always encouraged me to embrace these very same ideals - to be myself, to pursue what interested me, to dismiss those who sought to discredit or denigrate my passions, possessions, and passage through life on my own terms in my own way, and above all else, just as this movie and book also exhort, to dare to be different. This probably explains why instead of spending a life of tedium ticking boxes of conventionality and filling in the forms of conformity, I can look back upon what for me has been an unconventional, non-conformist, but thoroughly fascinating career in cryptozoology, with side-helpings of poetry, world travel, and quizzing.

I urge you to watch this movie if you can find it (sadly, it's not readily accessible either in DVD or videocassette format nowadays, but maybe it can be streamed?), and above all else to read the original book. It might just change your life - it certainly changed mine. 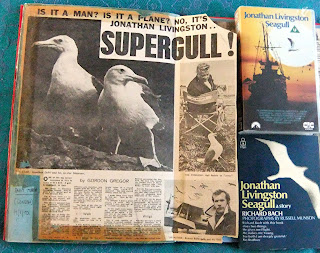 An article concerning this movie, published on 17 January 1973 by London's Daily Mail newspaper in one of the scrapbooks that I used to compile as a youngster and which were the predecessors of what became my ever-expanding archive of cryptozoology and (un)natural history (© Daily Mail – reproduced here on a strictly non-commercial Fair Use basis for educational/review purposes only) – please click on image to enlarge for reading purposes.

POSTSCRIPT
The original novel consisted of three parts, each one concerned with a different stage in Jonathan's personal voyage of discovery, but in 2014 it was republished with a new, fourth part added, set 600 years after the previous events and portraying a further dimension in the never-ending odyssey of his sublime, immortal life. So I definitely need to read this now-complete edition, and once again enable my soul to soar heavenward on the bright wings of a seabird who dared. 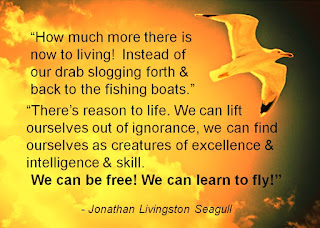 Quotes from Jonathan Livingston Seagull by Richard Bach (© Richard Bach / image found online, © unknown to me – reproduced here on a strictly non-commercial Fair Use basis for educational/review purposes only)