THE AHOOL AND THE OLITIAU – GIANT MYSTERY BATS ON THE WING? 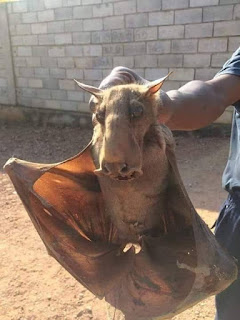 Photograph of hammer-headed bat currently doing the online rounds on social media (© owner presently unknown to me – reproduced here in a strictly non-commercial Fair Use basis for educational, review purposes only)

During the past couple of days, several internet friends and colleagues have independently brought the above photograph to my attention, asking me whether the creature portrayed in it is real or photoshopped. I can confirm that it is indeed real – it is a specimen of tropical Africa's hammer-headed bat – but due to the optical illusion of forced perspective, i.e. caused by it being positioned much closer to the camera than is the person holding it, this very distinctive-looking bat appears much bigger than it really is.

Nevertheless, seeing this photograph reminds me of what may be some genuinely giant mystery bats, and regarding one of which the hammer-headed bat has indeed been considered as a possible explanation – so here they are. 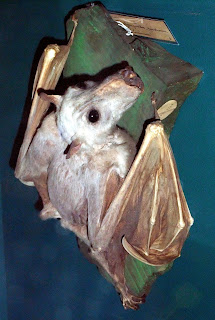 Native to New Guinea and the Bismark Archipelago, the world's largest known species of modern-day bat is the Bismark fruit bat Pteropus neohibernicus, which sports an extremely impressive wingspan of up to approximately 5.5 ft, and there are several other fruit bat species with sizeable spans too. Moreover, quoting from the third (most recent) edition of the late Gerald L. Wood's still-invaluable source of animal superlatives The Guinness Book of Animal Facts and Feats:

According to Peterson (1964)* a huge example of P. neohibernicus from New Guinea preserved in the American Museum of Natural History, New York, has a head and body length of 455 mm 17.9 in and a span of 1.65 m 5 ft 5 in. He thinks that some unmeasured specimens may reach 183 m 6 ft, but this figure is unconfirmed.

However, the cryptozoological chronicles contain details concerning at least two types of giant mystery bats whose wingspan is claimed to be twice as big as the above!

The secluded river valleys of western Java in Indonesia are reputedly home to one of these - an enormous but very elusive bat known to the local people as the ahool. It derives its name from the sound of its unmistakeable cry, which it is said to utter three times in succession while on the wing at night.

When questioned by interested Westerners, the locals provide consistent descriptions of the ahool. It has a monkey-like head and flattened humanoid face, a body as big as a one-year-old child's, and a massive 12-ft wingspan. It feeds principally upon large fishes that it snatches from underneath stones on river beds, but is occasionally encountered crouching on the forest floor, whereupon its feet are said to point backward. This last-mentioned feature may initially sound bizarre and implausible, but in reality it actually provides support for believing the remainder of their description, because as bat experts will readily testify, bats' feet do point backwards. Even when hanging upside-down from a branch, a bat wraps its feet around the rear portion of the branch, with its feet curling towards the observer, instead of away from him.

One of the most interesting encounters with an ahool comes not from an eyewitness but rather an 'earwitness' (whose testimony was first documented by American cryptozoologist Ivan T. Sanderson in a number of publications). The son of an eminent zoologist, naturalist Dr Ernst Bartels had spent much of his early life in Java, and was well-acquainted with the cries of all of the island's fauna. He was also familiar with the local Sundanese testimony concerning the ahool, but had remained sceptical – until one evening in 1927.

At around 11.30 pm, Dr Bartels had been lying awake in bed inside his thatched house near western Java's Tjidjenkol River, listening to the nocturnal insects' incessant orchestra of noises, when suddenly, from directly overhead, he heard a single loud, clear cry – "A-hool!". A few moments later, he heard it again, but further away now. Immediately, he jumped out of bed, grabbed his torch, and raced outside in the direction of the cry, whereupon he heard it again, for a third and final time, floating back to him from a considerable distance downstream. He stood there, totally transfixed, not because he didn't know what had made this unique triple cry, but rather because he did! 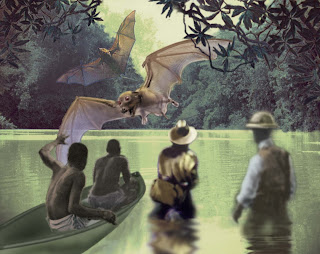 A mystery bat of equally dramatic dimensions has also been encountered in Cameroon, West Africa, and by two very experienced scientific observers. While participating in the famous Percy Sladen Expedition of 1932, the afore-mentioned Ivan T. Sanderson and fellow animal-collector Gerald Russell had been wading down a stream in Cameroon's Assumbo Mountains one evening in search of tortoises to collect when abruptly a jet-black creature with enormous wings and a flattened monkey-like face flew out of the darkness and directly towards Sanderson, its lower jaw hanging down, revealing an abundance of large white teeth.

Sanderson instinctively ducked, then he and Russell fired a number of shots in the direction of this terrifying apparition, but it merely wheeled out of range and vanished back into the darkness, its wings cutting through the still air with a loud hissing sound. The two men agreed that its wingspan was at least 12 ft, and it seemed to have been jet-black in colour. When they told the local hunters back at their camp what had happened, the hunters were all terrified – so much so that after informing the naturalists that their would-be attacker was known as the olitiau, they all fled from the camp! 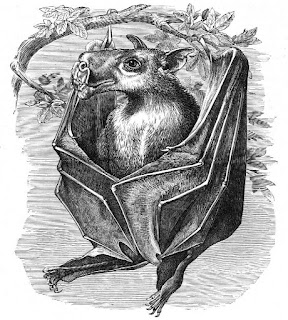 Sceptics later sought to identify the olitiau as a grotesque species of fruit bat known as the hammer-headed bat Hypsignathus monstrosus. As its name reveals, however, the head and face of this species is extremely long and swollen – wholly dissimilar from the flattened, monkey-like face specifically described by Sanderson and Russell.

A giant bat-like entity has also been reported from Ghana, where it is known as the sasabonsam. In 1939, a report of a dead specimen was published in the West African Review journal, together with a photograph of an alleged carving of one such beast, which depicted it with relatively short wings and a bearded, humanoid face.

There are two suborders of bats – the mega-bats (constituting the fruit bats), which include most of the largest species; and the micro-bats (constituting all of the other bats), many of which are much smaller. Consequently, we might expect bats with 12-ft wingspans to be more closely allied to the mega-bats than to the micro-bats. In reality, however, the reverse may well be true.

The flattened monkey or humanoid face of the ahool and the olitiau is particularly interesting, because this is very different from the long-muzzled, distinctly fox-like faces of the fruit bats (hence their alternative name of flying fox), but similar to those of many micro-bats. How extraordinary and zoologically iconoclastic it would be if the world's largest bat species ultimately proved not to be mega-bats but micro-bats! 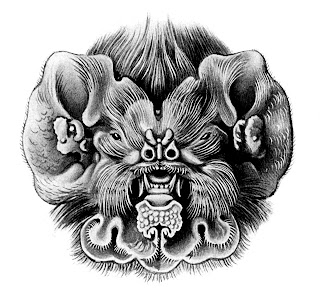 Finally: several striking photographs of people holding seemingly enormous bats via their outstretched wings can be readily accessed on the internet. However, close examination of these reveals that in each instance the bat – invariably a fruit bat, some species of which are already fairly large – is being held much closer to the camera than the person who is holding it. As with the hammer-headed bat photograph opening this ShukerNature article, these images are merely clever examples of forced perspective.

So, sadly, if we want to discover a bona fide giant bat, we must look for it not online but rather in the riverside jungles of Africa, or listen out for its unique triple cry amid the shadowy forests of Java. 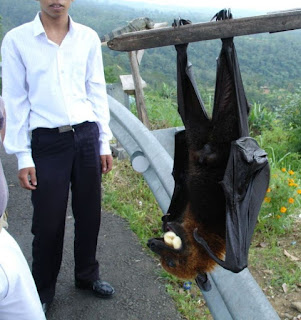 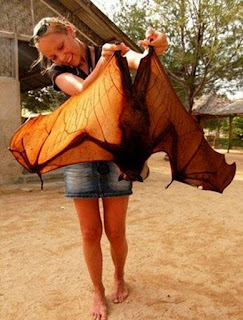 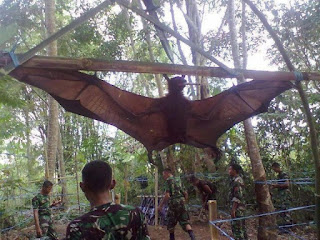 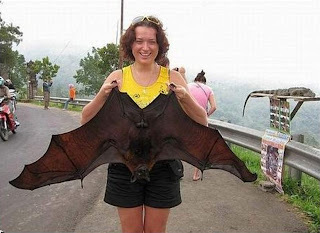 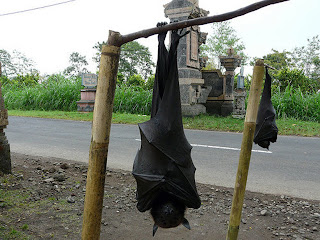 A selection of sourceless online photographs of supposedly giant bats that in reality are nothing more than examples of forced perspective (© owners presently unknown to me – reproduced here on a strictly non-commercial Fair Use basis for educational, review purposes only)

For more information concerning the ahool, olitiau, sasabonsam, and other crypto-bats, be sure to check out my book The Beasts That Hide From Man. 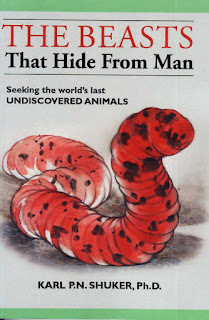