DIGGING UP A BURROWING CAT 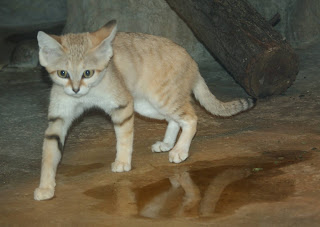 I am greatly indebted to English cryptozoological researcher Richard Muirhead for bringing to my attention an extremely curious report published on 26 January 1925 by the Leeds Mercury. It concerns what was referred to by the report as a burrowing cat, but what it truly was could well be another matter entirely. Here is the report in question:

A "Burrowing" Cat.
Captain Buchanan was engaged on scientific work, for Lord Rothschild and the British Museum, and brought back some remarkable relics of his journey through the heart of the Sahara.
His collection was the first brought from there.
One of the most valuable specimens was the skin of a "burrowing cat," the only specimen in any collection in the world.
This animal greatly resembles a cat, but is able to burrow like a rabbit. It is beautifully marked, has a fine coat, and lynx-like ears.
Captain Buchanan started from Lagos, Nigeria, travelled up country about 700 miles to Cano, and then struck across the vast desert to Algiers. 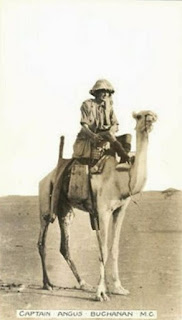 Captain Buchanan was Captain Angus Buchanan MC, the famous British explorer who (with his cameraman) was the first white explorer to cross the Sahara by camel. So, assuming that the above report is genuine and not journalistic hokum (but its specific naming of Buchanan, his zoologist sponsor Lord Walter Rothschild, and the British Museum suggests that it is indeed genuine), what could this odd-sounding creature be? 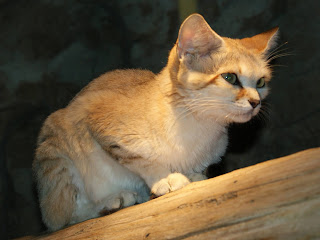 When reading the report, I immediately thought of the sand cat Felis margarita, a small species that does inhabit the Sahara and is in fact the world's only known felid adapted for desert life. Some (although not all) specimens are handsomely marked with stripes and spots, and its ears can appear pointed and therefore somewhat reminiscent of a lynx's. Moreover, it does indeed retreat into burrows when the prevailing temperature is too extreme. 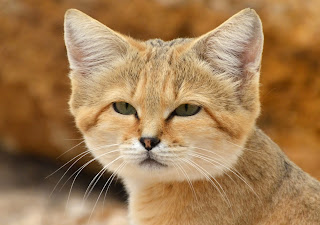 The ears of the sand cat can appear pointed, especially when viewed at certain angles (Clément Bardot/Wikipedia – CC BY-SA 4.0 licence)

However, the sand cat's existence was known to science long before 1925 (it was formally named in 1858), with many specimens already preserved in museums worldwide. So if it were a sand cat, the report's claim that Buchanan's was the first specimen in any collection is very mystifying. 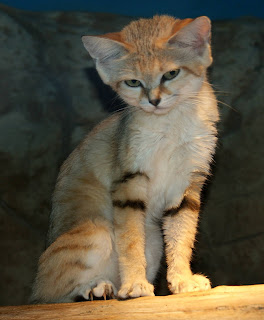 Are the mysterious burrowing cat and the desert-inhabiting sand cat one and the same species? (TimVickers/Wikipedia – public domain)