'THE WIND WHALES OF ISHMAEL' - A SHUKERNATURE BOOK REVIEW 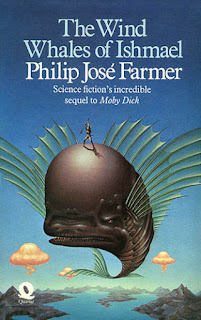 Published in 1973, this is the Quartet Books paperback edition of The Wind Whales of Ishmael (1971) (© Philip José Farmer/Quartet Books – reproduced here on a strictly non-commercial Fair Use basis for educational/review purposes only)

I have recently launched a new, occasional blog entitled Shuker's Literary Likings, in which I shall be reviewing novels and short story collections that I have particularly enjoyed reading down through the years - please click here to access it. Moreover, some of these works of fiction will include ones that have relevance to non-fiction or speculative subjects covered in ShukerNature. So to give you a direct example of this overlapping of interests, here is one of my recently posted literary reviews from my new blog:

The Wind Whales of Ishmael is a science fiction novel written by American sci fi/fantasy author Philip José Farmer (1918-2009) and originally published in 1971. Conceived as a sequel of sorts to Herman Melville's classic whaling novel Moby Dick (1851), it is set on Earth but in a far-distant future where the oceans have long since vanished and their former leviathans, the whales and the sharks, have evolved into huge aerial sky-beasts. However, these gargantuan yet exceptionally lightweight creatures are hunted not only by each other but also by a new breed of whalers who no longer set forth in maritime ships to pursue this aerial megafauna but instead in sky vessels. Here is this engrossing and highly original novel's official blurb:

With no more noise than of a ghost gliding over the ocean, the sea disappeared.

And Ishmael, lone survivor of Ahab's Pequod and now of the Rachel, falls through the empty sea-space, down through layers of membrane – into another world. Earth, but not the Earth he knows. A world where the sea has condensed through Time's evaporation; a world where whales fly and the sky is a swarm with floating animals and plants; a world of bloodsucking palsied vegetation, shaking land – and the Purple Beast of the stinging death.

But where there are whales, a whaler from another age can always find a home…

The Wind Whales of Ishmael is a startlingly imaginative tale of a weird, nightmare world from one of America's foremost science fiction writers.

There have been many editions of this novel since its original publication almost 50 years ago, but none of them boasts more spectacular front cover artwork than the edition detailed and depicted above. Its extraordinary wind whale and the tiny human whaler figure standing boldly if precariously upon its enormous bulbous head with harpoon poised are the sublime artistic creations of Bob Habberfield – a prolific front cover illustrator for sci fi and fantasy novels (particularly those of Michael Moorcock). Indeed, it was this vibrant illustration that originally attracted my attention and duly cajoled me into purchasing this edition when I spotted it in a local secondhand bookshop one afternoon during the early 1980s.

Yet as The Wind Whales of Ishmael is a science fiction novel, why have I devoted an entire ShukerNature post to it? In fact, it also has cryptozoological relevance, because the concept of sky beasts existing has long been aired from a real-life, non-fiction standpoint too, and by several different researchers. Moreover, it is a concept that has always fascinated me, inasmuch as Nature famously abhors a vacuum, yet the vast skies above us and the immense atmosphere surrounding our planet seem inexplicably lacking in sizeable creatures that have evolved specifically and exclusively to inhabit this rarefied upper zone, never sinking down to the ground until felled by death itself.

Over the years I have comprehensively chronicled the extremely radical, highly remote, yet tenaciously tantalizing cryptozoological possibility that perhaps such creatures do exist, remaining exceedingly elusive amid the most distant clouds and loftiest levels within Earth's atmosphere, only very rarely spied by our planet's gravity-grounded inhabitants, and that even when they are so observed, are mistakenly assumed to be alien spacecraft or suchlike, when in reality they are indeed UFOs, but living ones, not mechanical.

For more information, please click here to access on ShukerNature an extensive cryptozoology article on the subject of currently hypothetical sky beasts and cloud creatures.

I have also devoted a very detailed chapter to the history and investigation of alleged bona fide sky beasts in my book Dr Shuker's Casebook: In Pursuit of Marvels and Mysteries, whose front cover portrays me in the company of two gelatinous sky medusae (courtesy of incredibly talented artist friend Philippa Foster) – see below.

Little wonder, then, why I find this novel so enthralling as well as entertaining to read – giving me a veritable whale of a time, in fact! 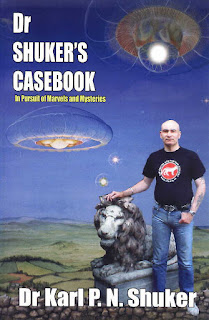