FOXED BY THE TALE OF A FOX WITH TWO TAILS! 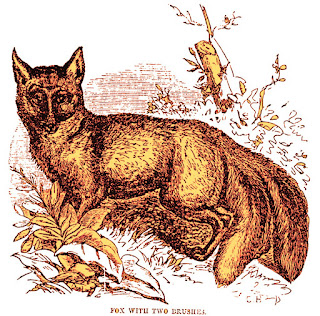 An exquisite engraving from Land and Water depicting what Germany's two-tailed fox from 1734 may have looked like in life, and which I have lightly tinted here for purely aesthetic reasons (public domain)

During more than three decades as a full-time cryptozoologist and animal anomalist, I have received my fair share of intriguing, unexpected communications, but one of the most interesting and unusual of these arrived very recently, in the form of an email from a correspondent (who wishes to remain anonymous) on behalf of his son, asking me if I had ever encountered any real-life reports of foxes with two tails.

As it so happens, I had. Delving deep into my archives, I dragged out a 19th-Century periodical report that I'd had on file for almost 30 years, documenting just such a creature and even including an engraving of what it may have looked like in life (which is the picture that opens this present ShukerNature blog article of mine), but I had never done anything with it.

Consequently, I lost no time in scanning this long-neglected account and emailing it to my correspondent. Moreover, this in turn inspired me to document it on ShukerNature – so here it is. 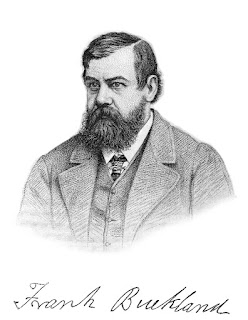 Published in the 6 May 1876 issue of the British nature periodical Land and Water (vol 21, p 338), the report in question had been written by none other than eminent English zoologist and natural historian Frank Buckland (1826-1888), who (rather like me) had always been fascinated by the more eccentric examples to be found among the vast diversity of Nature. Here is what he wrote:

FOX WITH TWO BRUSHES…
Our esteemed correspondent, "C.," has been kind enough to send tracings of some remarkable drawings that occur in Ridinger's celebrated work. About 150 years ago, this wonderful artist brought out his celebrated copperplates or etchings, of which the following are considered the best: Eight plates of wild animals; forty plates of observations of wild animals; fables of animals, sixteen plates; hunting of animals of the chase by dogs, eight plates; Paradise, in twelve plates. I confess I was rather astonished to see that there had ever existed such a thing as a fox with two brushes. Ridinger, however, must have had some good authority for giving the portrait of this curious animal.
"C." writes as follows, quoting probably from Ridinger: "The fox was killed on the 14th February, 1734, in the Orannenberger [=Oranienburg] Forest, four German miles from Berlin. The skin was kept for the sake of its rarity, at the Royal Museum of Art and Natural Science (Konigliche Kunst und Naturalien Kammer). Perhaps your correspondent, "B.W.," would be able to tell us if there is still at the Royal Museum any record of this skin."

And here, for its historical worth, is a scan of Buckland's published report as it appeared in Land and Water, including Ridinger's engraving of this extraordinary animal: 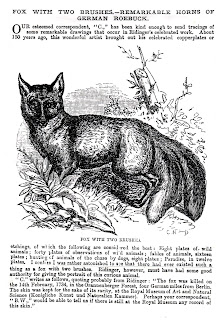 Frank Buckland's Land and Water report of 6 May 1876, containing a specially-created engraving portraying the likely appearance of the two-tailed fox killed in Germany on 14 February 1734 and reported by Ridinger - click it to enlarge for reading purposes (public domain)

Ridinger, incidentally, was the celebrated German painter, engraver, and publisher Johann Elias Ridinger (1698-1767). He was extremely famous for his beautiful, life-like engravings of animals, as well as hunting scenes, culminating in his superlative, inordinately sumptuous tome Ridinger's Coloured Animal Kingdom. 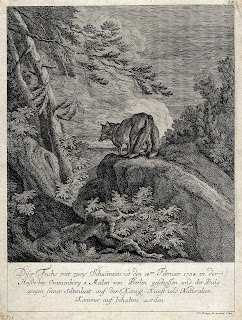 Although the concept of a fox with two tails (i.e. a dicaudate or bicaudate fox, to cite the technical terms given to this particular teratological condition) may initially seem highly implausible if not downright impossible, in reality such an occurrence can be readily explained – nothing more dramatic, in fact, than the result of a freak longitudinal splitting of the embryonic tail bud during the fox foetus's development, yielding two tails united at their base. Although this is the only case of a dicaudate fox that I have on file, I have records of other dicaudate individuals from a wide range of different species.

As for this German vulpine example's skin, conversely: sadly, the chances are that it no longer exists. This is because the procedures available back in the 18th Century for preserving animal skins were generally not sufficiently advanced to guarantee their long-term survival, so that they eventually disintegrated or were devoured by bugs.
Nevertheless, it would be interesting to know if at least an official record or other documentation of it still exists at the above-mentioned Royal Museum – something that my German friends and colleagues may like to look into for me?? 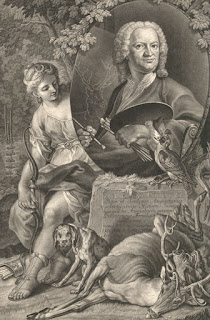