THE PARTRIDGE CREEK MONSTER - A LIVING DINOSAUR IN THE YUKON? 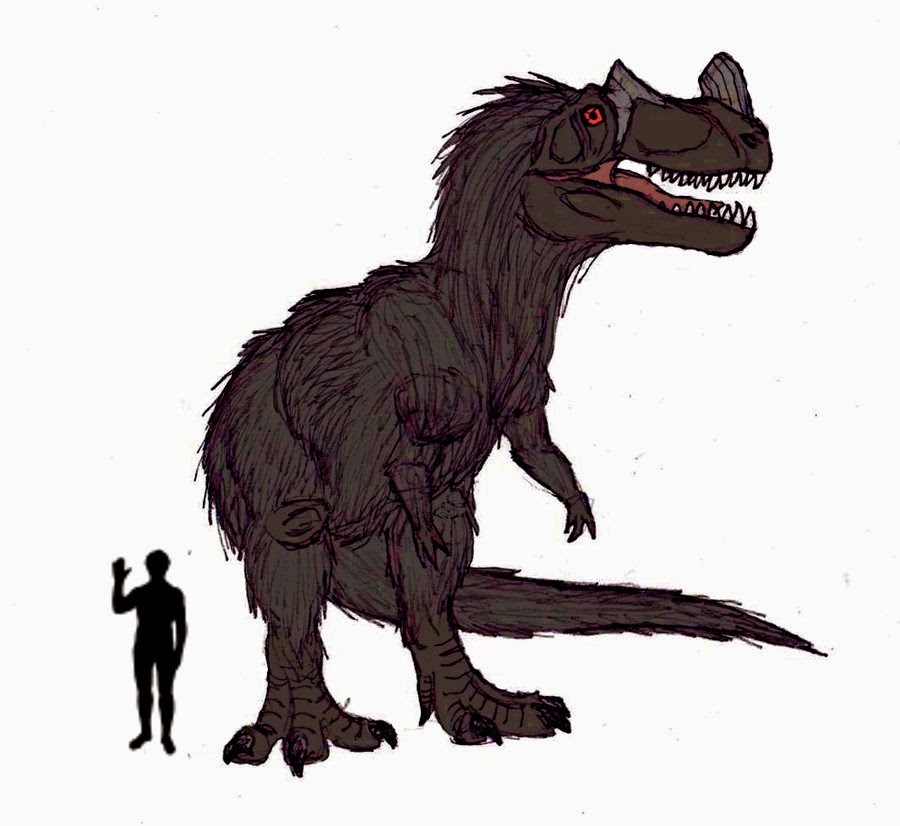 Artistic representation of the Partridge Creek monster (© Connor Lachmanec, aka TheMorlock on deviantart.com)

The Arctic wastelands of the Yukon Territory, on the borders of Canada and Alaska, are surely the last place anyone might expect to meet a dinosaur - which is why the following case merits a prominent place among the dubitanda of cryptozoology.

The extraordinary tale of the beast from Partridge Creek debuted on 15 April 1908, within the pages of a French journal called Je Sais Tout ('I Know All'), and was recounted by one of the creature's eyewitnesses, French traveller Georges Dupuy. According to Dupuy, the adventure had begun one day in 1903, when a banker from San Francisco called James Lewis Buttler and a local gold prospector named Tom Leemore were hunting three large moose amid the marshy tundra countryside near the Yukon's Clear Creek, about 100 miles east of Dawson City. Suddenly, one of these burly deer raised its head as if it had heard something unexpected in the vicinity, and just as it did so a second member of the trio emitted a loud bellow of alarm, sending all three of them fleeing southwards with all speed. 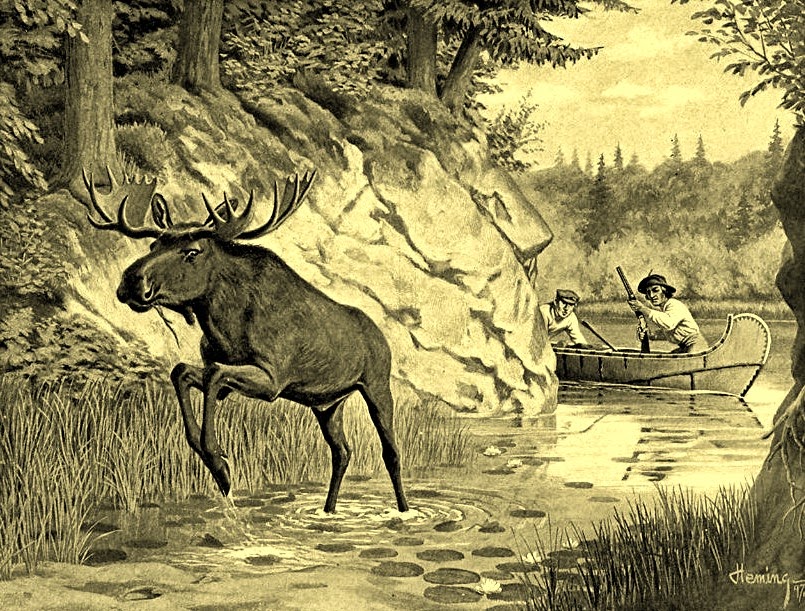 A hunted moose fleeing the scene, an engraving from 1897 by Arthur Heming

Standing 7 ft at the shoulder and weighing up to half a ton, as the world's largest living species of deer the moose is not a creature to be readily intimidated by anything - which is why the two hunters were so surprised by their quarry's impromptu flight. When they reached the spot from where the moose had fled, however, the reason for these creatures' uncharacteristic behaviour became clear - there in the snow was the clear impression of an enormous body belonging to some unidentifiable beast of monstrous proportions.

The beast's belly had ploughed into the river bed's swampy mud a massive furrow 30 ft long, 12 ft wide, and 2 ft deep, which was flanked by gigantic footprints measuring 2.5 ft across and 5 ft in length, each also yielding impressions of sharp 1-ft-long claws. Completing the clues left behind by this unseen goliath was the imprint of a mighty 10-ft-long tail spanning 16 in across its middle. 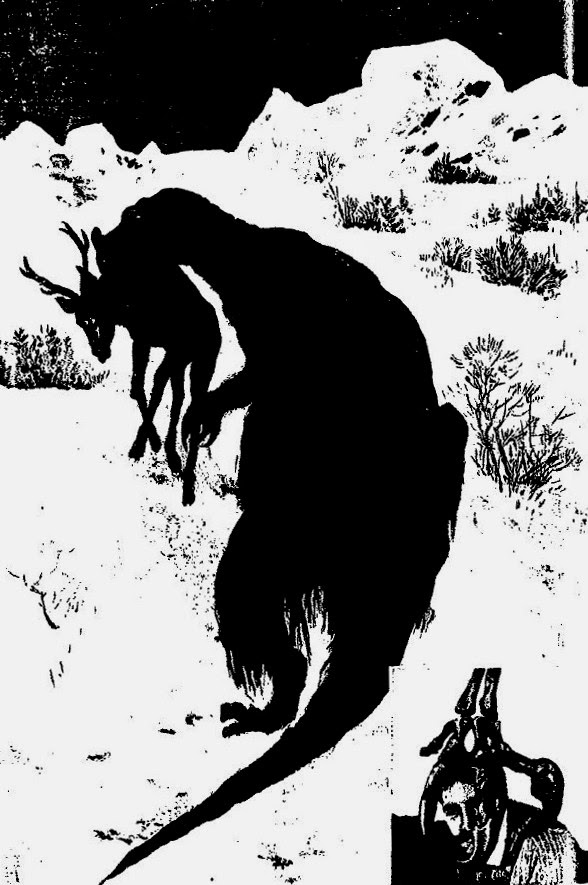 Notwithstanding the nightmarish visions conjured up by such dramatic dimensions, the two men decided to follow the monster's tracks, which led after several miles to a gulch known as Partridge Creek, where the tracks simply came to an end - giving the men cause to speculate that it must have leapt directly up into the gulch's encompassing cliffs.

Following this, they made their way by canoe along the McQuesten River to the nearby outpost of Armstrong Creek - an Indian village where Buttler had earlier arranged to meet Dupuy to take him hunting, and which was home to the Reverend Father Pierre Lavagneux, a French-Canadian Jesuit priest. When Dupuy and the priest heard about the monster, they were highly sceptical at first, but eventually Buttler persuaded them to return to Partridge Creek with Leemore and himself in a second search for it, aided by some local Indians.

After a day's intensive but fruitless search of the immediate area and some distance beyond it in all directions, however, the party of weary beast hunters had resigned themselves to failure, and decided to establish camp at the top of a rocky ravine. Thoughts of confronting monsters had been largely suppressed by the more practical goal of preparing a warm meal - until, wholly without warning, they received a terrifying reminder of the reason for their presence there. A hideous roar broke the Arctic stillness, and as the startled hunters reached for their rifles, one of them pointed with shaking hand to the opposite side of the ravine - where the crimson rays of the dying sun revealed a heart-stopping sight. A veritable monster in every sense of the word was clambering up its slope! 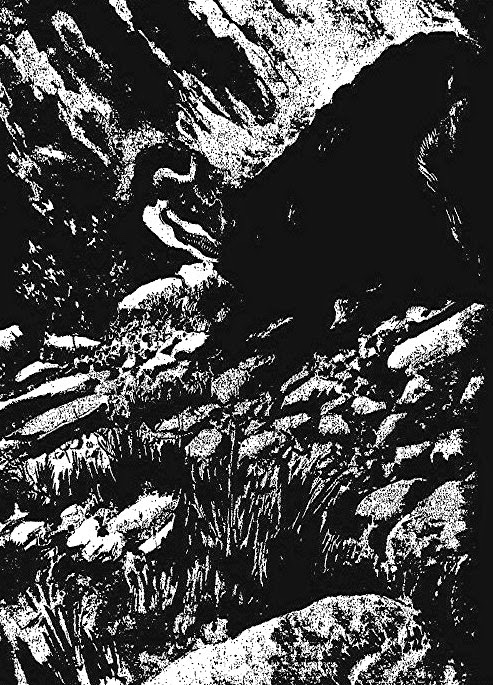 Black in colour, at least 50 ft long, and estimated by Buttler to weigh about 40 tons, their horrific visitor continued to climb upwards for a time, mercifully unaware of its terrified human eyewitnesses' close proximity. When it was about 200 paces away, it paused for 10 minutes or so, furnishing them with ample opportunity to observe it at close range in all its spine-chilling glory. Although profusely splattered with thick mud, its hide could be seen to bear many coarse, grey-black bristles like those of a wild boar, and a hideous mass of blood and saliva oozed from its cavernous jaws. Most remarkable of all, however, was the rhino-like horn perched prominently if somewhat incongruously near the end of its snout.

The Indians cowered in terror behind a large rock, and the others were rendered momentarily speechless by the monstrous apparition, but when it became clear that it had not detected them the priest gained sufficient control of his voice to whisper between still-chattering teeth: "A ceratosaurus...It's a ceratosaurus of the Arctic Circle!". Ceratosaurus nasicornis was a large flesh-eating bipedal dinosaur of the Jurassic Period, related to the later, larger Tyrannosaurus rex and readily identified via the large horn near the tip of its upper jaw.

As they continued to watch, the beast suddenly reared up onto its massive hind legs like a hellish kangaroo, gave voice to an ear-splitting roar again, and then disappeared back down into the ravine via a single immense bound. Not too surprisingly, the beast hunters found that the thrill of pursuing this creature had lost its former charm, and the following morning they journeyed back to Armstrong Creek. Dupuy later attempted to interest the Canadian governor at Dawson City in supplying them with a large-scale hunting party of mules and 50 armed men, but when this failed he returned home to France.

The matter was not quite over, however, for in January 1908 he received a letter from Father Lavagneux, dated Christmas Day 1907, in which the priest informed him that on Christmas Eve, and while in the company of ten Indians, he had seen their monstrous quarry once again - this time racing at speed over the creek's frozen river, with what seemed to be the carcase of a caribou clamped between its great jaws. Tracks identical to those found back in 1903 were clearly visible in the deep mud, and were followed by Lavagneux and company for at least two miles before being obliterated by falling snow.

That appears to have been the last time that the beast of Partridge Creek was spotted, either by Lavagneux or by anyone else, for there does not seem to be any further records on file alluding to this extraordinary creature. Bearing in mind, however, that the existence of such an entity calls for our belief not only in the post-Cretaceous persistence of an endothermic hairy dinosaur but also its existence in what must surely be the least compatible habitat for any type of large reptile living today, its lack of cryptozoological credibility should hardly come as a great surprise!


This ShukerNature post was excerpted from my book In Search of Prehistoric Survivors, which will be reissued later this year.

The original edition of In Search of Prehistoric Survivors