FROM WAR-TIME VAMPIRE TO MODERN-DAY CHUPACABRA? 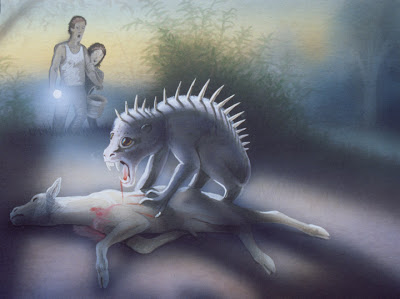 Highly-acclaimed graphics artist Andy Paciorek sent me yesterday (19 October 2010) the lower of the two illustrations reproduced above, which has a fascinating if totally mystifying cryptozoological connection. The picture is a war cartoon, entitled 'De Vampyr' and was prepared by L J Jordaan for Der Groene Amsterdammer (an underground Dutch periodical) in 1940.

Yet this claw-footed, long-tailed, gasmask-wearing(!) 'vampire' bears scant similarity to the familiar Draculaesque variety with hypertrophied canines, prominent widow's peak, and a talent for melodramatic cloak-swishing!

Instead, as Andy so rightly pointed out, what it does resemble, and to a remarkable degree, is the chupacabra - a Hispanic mystery beast that did not come to widespread public and media attention until the mid-1990s. Of particular note is the Dutch war vampire's row of long dorsal spines, a very distinctive characteristic frequently reported for the chupacabra but not usually for other cryptids. Wings have also been cited for the chupacabra on occasion, as have powerful hind limbs, and its blood-sucking behaviour, often totally draining of blood the carcases of its animal victims, is well-documented - all features exhibited here by Jordaan's vampire, more than half a century before the chupacabra.

For visual comparison, the painting positioned directly above 'De Vampyr' here is of a chupacabra, produced by celebrated cryptozoological artist William Rebsamen, based upon eyewitness descriptions, and except for the chupacabra's quadrupedal rather than bipedal form, fundamental morphological similarities between the two entities are undeniable.

Just a baffling coincidence, or are the history and public evolution of the chupacabra more complex and of earlier origin than previously thought? Over to you...
Posted by Dr Karl Shuker at 20:33