With almost 900,000 hits since I uploaded it on 12 June 2012, by far the most popular of all of my 300+ ShukerNature posts is my exposure of three online black lion photographs as computer-modified fakes (click here). In that same post, I also included some information concerning various alleged sightings in the wild of genuine black lions, plus a very interesting lion cub called Ranger, born at Glasgow (formerly Calderpark) Zoo in Scotland during 1975.

What made Ranger so interesting is that he possessed a black chest and a large patch of black pigment on one leg, possibly the result of a rare pigmentation phenomenon known as mozaicism. I learnt from the zoo's then director, the late Richard O'Grady, that in an attempt to create an entirely black lion, Ranger was mated with his mother, Kara, on several occasions when he reached adulthood, and also with other lionesses, but no offspring ever resulted. Consequently, it was suspected that Ranger was sterile, though he was in excellent overall health and lived to the ripe old age of 22. 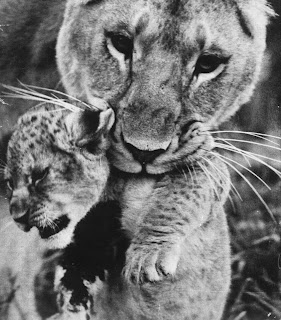 Until very recently, the only photo of Ranger that I had ever seen was the above b/w photograph, which was kindly supplied to me by Richard O'Grady back in the late 1980s for use in my writings. It depicts Ranger as a cub held by Kara, and clearly reveals his black chest and the large patch of black pigment on his right foreleg.

On 28 March 2013, however, I received a short email from Mr Peter Adamson of St Andrews, Scotland, who, to my great excitement, not only mentioned that on 28 July 1984 he had seen Ranger as an adult lion at Glasgow Zoo but also attached with his email a colour photograph that he had snapped of him there, showing Ranger to have matured into a very impressive individual with a handsome black-tipped mane.

Reproduced here by kind permission of Peter, it clearly displays the patch of black pigment on Ranger's right foreleg, and, as pointed out by Peter in his email to me, it also reveals that he possessed another large, though slightly paler patch of black pigment on the rear upper portion of his left hind leg, which I hadn't previously known about, and which provides further support for the prospect that Ranger was exhibiting mozaicism.

My grateful thanks once again to Peter Adamson for bringing to my attention his extremely interesting yet hitherto-unpublished colour photograph of the adult Ranger, and for very generously allowing me to document it publicly for the first time - yet another ShukerNature exclusive!

Ranger as an adult lion at Glasgow Zoo, with increased contrast (Peter Adamson)