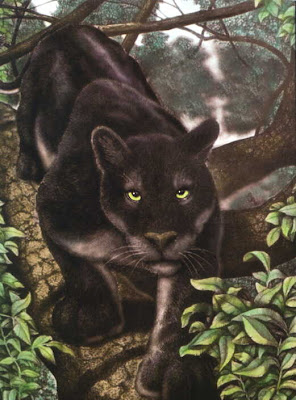 
A CRYPTOZOOLOGICAL CAT-ALOGUE FROM PERU

One of these, reported from Peru's Ucayali and Pasco provinces, is particularly distinctive, because not only is it as large as a jaguar, but also it is said to be striped, just like a tiger. There is no known species of striped cat indigenous to South America, but reports of a large, highly elusive species of striped cat have previously been documented from Colombia and Ecuador. These latter reports are thought by some cryptozoologists to be evidence for the existence of a living species of sabre-toothed cat.

The second Peruvian mystery cat, known to the Amuesha native hunters and inhabiting the lower Palcazu River valley in Pasco province, is equally remarkable. It too is as large as a jaguar, but instead of possessing the jaguar's characteristic rosette markings, its entire body is uniquely patterned with solid black speckles. For this reason it has been variously nicknamed the speckled or mottled jaguar. Intriguingly, this description is reminiscent of another, equally cryptic cat, reported from Brazil and Guyana, and referred to by the Wapishana Indians as the cunarid din.

Peruvian mystery cat #3 allegedly resembles a giant black panther, is said to be twice as big as a jaguar, and is known to the Quechua Indians as the yana puma ('black puma'). Fully confirmed specimens of melanistic (all-black) pumas, however, are exceedingly rare, so perhaps it may be an unusually large version of melanistic jaguar instead, one whose coat markings are completely hidden by its fur's abnormally dark background colour.

As for the fourth member of this cryptic quartet, Hocking refers to it as the jungle lion - for good reason. According to rangers who have reported it in the Yanachaga National Park, this mystery cat has reddish-brown fur, is lion-sized, and has long hair around its neck.

The existence of four still-undiscovered species of big cat in Peru alone seems scarcely conceivable, even in this modern age of unexpected zoological surprises (such as the several notable new species of New World monkey, marmoset, and other mammal already discovered in South America during the 1990s and 2000s). Some may merely be unusual mutant forms of known species. However, Hocking's amassed evidence is not limited entirely to the anecdotal variety. In 1993, Hocking procured from Indian hunters the skull of what was said to be a female specimen of the striped mystery cat, which has since been passed to felid specialist Dr Steven C. Conkling for study. Moreover, he has also obtained the skull of an alleged 'speckled jaguar', which has been examined by a number of American zoologists, whose verdict is that it is notably different from the skull of any known cat.

Spurred on by these finds and comments, Hocking is continuing his search for physical evidence, such as pelts and, ultimately, entire carcases, with which to ascertain once and for all the true taxonomic identities of these feline riddles from Peru.

[Update: In 2014, a study was published in which the skulls from two of the above mystery cat types had been examined and their likely identities ascertained - click here to read my ShukerNature blog article concerning this.]

Nor is that the end of possible feline discoveries to be made in South America.

During a year-long expedition through Brazil in 1996-7, Dutch primatologist Dr Marc van Roosmalen - personally responsible for discovering most of the 1990s' and 2000s’ extraordinary number of new South American primates, as well as the giant peccary, dwarf lowland tapir, pygmy manatee, and other remarkable new mammals in South America - spied what he claims to be a new species of jaguar. He described it as being predominantly black, but readily distinguished from normal melanistic specimens by virtue of a distinctive white collar-like patterning around its throat, which he likened to that of the Brazilian giant otter, and also a lion-like (i.e. bushy-tipped?) tail.

IN PURSUIT OF THE ISNACHI

Peruvian mystery cat investigator Dr Peter Hocking has also been following up reports of a mysterious 'mega-monkey'. Several totally new species of monkey have already been discovered in South America during the 1990s, but according to Hocking a very spectacular example may still await formal disclosure in Peru. Referred to by the local Indians as the isnachi as well as by several other names too, their descriptions of it call to mind a monkey with a body as large as that of a chimpanzee, but with a baboon-like face, and a short tail. They also claim that it is rare but very fierce, so they avoid it whenever possible.

One of the isnachi's most characteristic activities is to rip apart the tops of chonta palm trees in order to obtain the tender vegetable matter inside. Consequently, its presence within a given locality can be readily confirmed simply by encountering trees damaged in this way, because the isnachi is the only animal strong enough to accomplish such a feat. Should such a creature as this be ultimately unveiled, it would constitute the biggest living species of South American monkey known to science

Some highly controversial birds have been reported from South America. Notable among these is the glaucous macaw Anodorhynchus glaucus. This beautiful species, resembling the larger, famous hyacinth macaw but with sea-green shades to its plumage as well as the deep cobalt hues of its larger relative, was formally described in 1818, and seemingly had a wide distribution across this continent. Yet by the end of the 1800s, it had apparently become extinct in the wild, with just a few specimens left in captivity. In recent years, however, a number of odd-looking, sea-green-feathered birds officially deemed to be hyacinth macaws (or, in some cases, the slightly smaller, turquoise-tinged Lear's macaw) have turned up in aviaries around the world, which some experts claim to be bona fide glaucous macaws. One of the most noteworthy examples was a distinctive specimen imported into Britain by parrot breeder Harry Sissen in February 1992, on loan from France's Mulhouse Zoo, under the impression that it was one of a pair of Lear's macaws. Nevertheless, none of these has so far been confirmed as glaucous macaws - but if any are, this suggests that somewhere in the wilds of South America is an undiscovered population of this elusive, mysterious parrot.

The salt lakes beyond the Atacama desert in the high peaks of the Chilean Andes harbour three different types of flamingo - officially. Unofficially, however, there may be a fourth, still-undiscovered type. The local Indians inhabiting this region refer to the three known flamingos as the tococo (Andean flamingo), guaichete (Chilean flamingo), and chururo (James's flamingo) respectively. However, they also distinguish an additional type, which they speak of as the jetete. Bearing in mind that the breeding grounds of James's flamingo in this remote, scarcely accessible locality remained hidden to science until as recently as 1957, it would not be impossible that a new flamingo does indeed linger undetected here.

Also worthy of investigation are reports of a peculiar type of guan gathered by Peruvian zoologist Dr Peter Hocking. Guans are gallinaceous birds distantly related to pheasants and grouse, but found only in the New World. Numbering several different species, they generally possess fleshy facial wattles. However, rangers working in the Yanachaga National Park, in Peru's Pasco province, have informed Hocking that an all-black form of guan occurs amid the park's higher elevations that does not possess any wattles at all - unlike the known species of black guan, Aburri aburria, which also occurs in this park but only at lower elevations. Just a freak, wattle-lacking version, or a new species awaiting disclosure?

During the 1990s, the place to be for any enthusiastic cryptozoologist was Indochina, especially Vietnam and neighbouring Laos, where an extraordinary number of large new hoofed mammals and other species have been sensationally revealed to scientists. If the ongoing investigations of Drs Hocking, van Roosmalen, and Oren prove successful, however, we may well be looking to Peru and Brazil as the hotbeds of major cryptozoological revelations during the opening decades of the 21st Century.

Posted by CFZ: Cryptozoology Online at 12:16