MYSTERY CATS IN SHOWBUSINESS - YOUR ASSISTANCE IS REQUESTED! 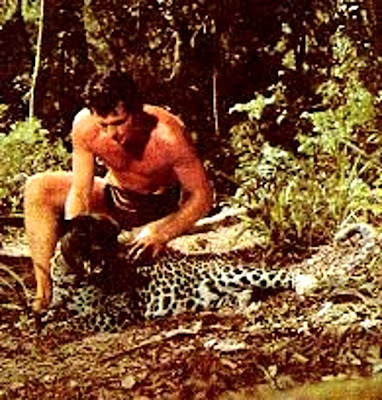 The entertainment world may not be the most likely realm in which to encounter real-life mystery cats, but a number of intriguing examples have cropped up here from time to time, including the following two cases - neither of which has been resolved so far.


A BLACK TIGER IN THE CIRCUS?

Melanistic (all-black) specimens of leopards Panthera pardus (commonly termed black panthers) and jaguars P. onca are well known. Conversely, although there have been many reports of all-black tigers P. tigris (see my book Mystery Cats of the World, 1989, for the first - and still the most detailed - review of cases ever published), not a single specimen or skin of one has ever been formally submitted for scientific examination and verification.

Consequently, in the absence of a specimen, fully melanistic tigers are still regarded as cats of cryptozoology, even though there is no sound zoological or genetic reason why all-black mutants of this species should not arise from time to time. Hence I was greatly excited when I received an e-mail from Arkansas wildlife artist William M. Rebsamen on 3 October 1997 in which he recalled seeing a photo of a living black tiger in a book! According to Bill:

"I remember once seeing a large book about the history of the Ringling Brothers Circus and was surprised to find a clear photo of a big cat trainer with a "Black" tiger (you could still make out his stripes though) mixed in with his normal Bengals. Is this for real?"

If only I knew! However, the fact that its stripes could still be discerned against its fur's black background colouration is precisely what one would expect with a genuine melanistic tiger, just as the rosettes of black leopards and jaguars can be perceived against their fur's ebony ground colour when viewed closely or at certain angles. 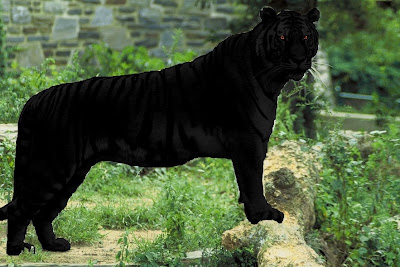 Needless to say, I lost no time in requesting any further information that Bill could recall concerning this fascinating disclosure, and on 15 October I received the following details:

"Sorry for the uncertainty of my memory concerning the black tiger photo but the best I can remember [is] it was a coffee table sized, hardcover book. My best recollection is that the title was "The History of Ringling Bros. and Barnum & Bailey Circus". I'm sure it would have been around 1974 or 1975 when I saw the book, new, in a bookstore at our local mall. The photo was in towards the middle of the book. It pictured a trainer in a cage with 4 or 5 bengals, one appearing to be black.

"I hope this isn't another case like the "Thunderbird Photo", but I can assure you, as a young kid of about 10 or 11 at the time, I was thoroughly fascinated with big cats and would go to the mall every Saturday for as long as that book store was in business and I would look at that photo. I don't know why it never crossed my mind to ask my mom to buy it for me. I do know that for that age I could distinguish big cat subtleties (like the still visible spots on a black leopard) and was amazed by this photo because it appeared to show stripes under the dark fur."

The late Mark Chorvinsky, Strange Magazine's founding editor and a longstanding friend of mine, had a lifelong interest and extensive knowledge of circus history, so I swiftly informed him of Bill's remarkable news, and Mark promptly contacted the Ringling Brothers Circus requesting any information that they could send concerning this melanistic mystery. Sadly, however, he never received any reply, but Bill and I have continued to collaborate fully in pursuing this compelling mystery in the hope of uncovering not only the photo but, as a result, proof that a living black tiger was actually maintained in captivity!

Another cryptozoological researcher who greatly assisted us was the late Scott T. Norman, from California. After receiving details from Bill, Scott conducted some extensive Internet searches and sent out many requests for information relating to this photo. Again, however, no further details were forthcoming. 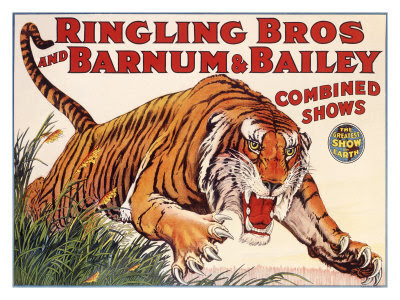 Has anyone reading this ShukerNature blog post seen the book and the all-important photograph inside it referred to by Bill? Or does anyone have any additional information concerning the possible presence of a black tiger in the Ringling Brothers Circus? If so, I'd greatly welcome any details that you could send to me or post here.


TARZAN AND THE BLACK-HEADED LEOPARD

Remarkably, the above feline enigma is not the only mystery cat from the realms of showbusiness whose apparent existence has been brought to my attention by Bill Rebsamen. Bill also very kindly alerted me to the curious black-headed leopard that appeared in an episode of the 'Tarzan' television series from the 1960s, starring Ron Ely in the title role. According to Bill, in the storyline of this particular episode Tarzan's sidekick was a 12-year-old boy from India who had made friends with a spotted leopard that was black from the neck up, and which was being pursued by evil fortune-hunting poachers. After a number of e-mails and Internet requests, Bill succeeded in obtaining a copy of a frame from the episode, shown above at the beginning of this ShukerNature post, depicting a black-headed leopard lying next to Ron Ely.

To my mind, this animal was probably 'created' in the series' make-up department, as the black head and neck colouration is precisely delineated from the spotted remainder of the beast, whereas one might have expected a rather more blurred demarcation if the leopard's pigmentation had been genuine. Also, I assume it is this odd colouration that made it so valuable (in the story) to the poachers, who would not have been so concerned about tracking a normal leopard. Bill, however, is not so sure, noting in a November 1997 e-mail to me:

"It seems to me this [the black-headed leopard] may fall under the "stranger than fiction category" when you ask the question as to why would someone go through the trouble of dyeing the leopard's head black for a syndicated TV show watched by people who would, for the most part, not realize the significance of this rarity?"

If its rarity is not specifically alluded to in the programme, then Bill does have a point. Also, it has to be conceded that transforming a leopard in this way would prevent any stock footage of leopards being used in that particular show (which is a common - and financially sensible! - practice when putting together a show containing a lot of animal footage).

Despite continued efforts, Bill did not succeed in his attempts to track down the show's producer, animal trainer, or anyone else with knowledge of this episode, in order to uncover the true identity and history of its melanocephalic animal star. 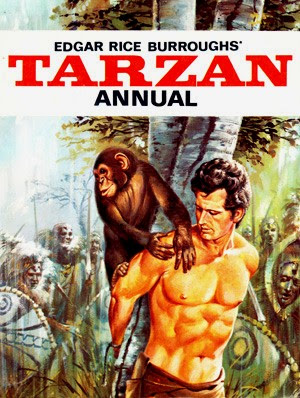 So once again, if anyone reading this ShukerNature post has any relevant information, I'd love to hear from you - it may not be too late even now to solve yet another feline mystery emanating unexpectedly from the entertainment world.

Yesterday, I learnt from American correspondent Shane Lea that he owned the full set of the 'Tarzan' episodes starring Ron Ely, and he promised to go through them in search of the elusive and enigmatic black-headed leopard. I mentioned that one episode was entitled 'Leopard on the Loose' - perhaps it featured in that one.

Later that same day, I was delighted to receive the following, extremely informative and illuminating email from Shane (thanks Shane!):

"Well, I tracked down and viewed the Tarzan episode w/the black-headed leopard in it. It is indeed called Leopard on the Loose. Interestingly enough, they actually refer to it as a black-headed leopard in the episode. Very interesting. My own feeling after having viewed it, and knowing it is a product of Hollywood, is that they might have used charcoal on the leopard's head. The reason is, the rosettes are clearly visible on the head and the head also has a faded look. Let's hope they didn't spraypaint the poor thing, but they got away with things in the sixties that today they never would...But, it is a great episode and the black-headed leopard looks real. At least we don't have to worry about it being green-screened or photoshopped, the leopard is real. Charcoal would rub right off and would be harmless to the animal. The other alternative, is that it really is a black-headed leopard! Maybe an aberration, one that went incompletely melanistic? They did say in the episode that it was rare, valuable and worth $4,000. That would be in 1966 dollars, in 2012 dollars, $52,000,000 LOL!...

"Manuel Padilla Jr., is Jai's real name. He played Tarzan's young sidekick in the series. The black-headed leopard was his pet in the show. If he is on Facebook, he might know or remember something regarding the leopard. The series executive producer was Sy Weintraub, although who knows if he is still around. Also, actor Russ Tamblyn played one of the poachers. Another producer was Jon Epstein, co-producer Don Brinkley. The animal supervisor, was Joseph S. Stewart. The episode was directed by Paul Stanley. I hope this helps. A black-headed leopard definitely sounds like something ERB - Edgar Rice Burroughs - would have written about. I think he included much fact in his science fiction. I am a huge ERB fan. No-one could write action like he could. He was one of the very best, that's why they named
Tarzana, Ca. after him!"

All I need to do now is find a DVD of this episode that is compatible for viewing using a British DVD player - sadly, American DVDs are not compatible. So watch this space for further developments!
Posted by Dr Karl Shuker at 20:01