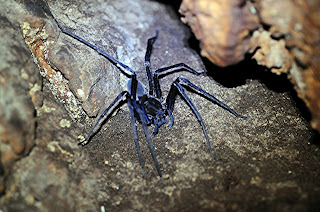 No, I haven't spelt my name incorrectly in the title of this present ShukerNature blog article. The Carl referred to here is not me, but is instead arachnid expert Carl Portman, a longstanding friend of mine who has sought out rare and unusual invertebrates (especially spiders) in remote, exotic locations throughout the world. During one such search, moreover, he actually encountered a very remarkable, and beautiful, species that may still be scientifically undescribed and named. However, it does have a local name – the blue devil.

As he only made public for the first time quite recently, in an Animals and Men article (May 2015) for the CFZ, it was while visiting Black Rock in Belize during April 2014 that Carl first learnt about something that may be very special indeed. He was told about a certain cave situated high up in the mountainside that locals claimed was home to a magical kind of very large blue spider known as the blue devil. Although it sounded more likely to be folklore than fact, he decided to visit the cave, just in case, and after an arduous near-vertical climb accompanied by his wife Susan and a native guide called Carlos, he finally reached the cave's opening and entered it. During a lengthy trek through its gloomy interior, they came upon quite a range of animals, including frogs, lizards, cave lice, tailless whip scorpions (amblypygids), bats, and some spiders too – but none of the blue devil variety. 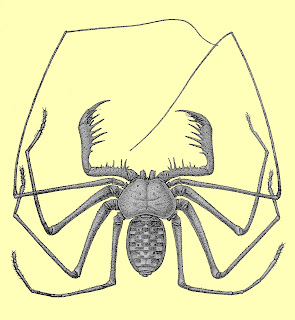 Reluctantly, they eventually decided to trek back to the entrance, but before they reached it, and to everyone's amazement but delight, Carlos spotted one of these elusive, magical creatures – a blue devil! The size of Carl's hand and indeed a brilliant, vibrant blue, it was possibly a species of wolf spider, and Carl swiftly snapped a few photographs of this spectacular arachnid before it vanished back into the cave's stygian depths.

Despite being very knowledgeable and experienced regarding spiders, Carl had no idea of the blue devil's species, and according to Carlos they are found only in this cave, nowhere else. Could it therefore be a dramatic new species? Only if a specimen is collected and subjected to scientific scrutiny can its taxonomic status be conclusively determined, but as I learnt from Carl in July 2015 during some personal communications with him on the subject of this very anomalous arachnid, he definitely hopes to return to study it, so an answer to the riddle of its identity may soon be forthcoming. Meanwhile, however, the blue devil of Belize remains a hidden, thought-provoking mystery. 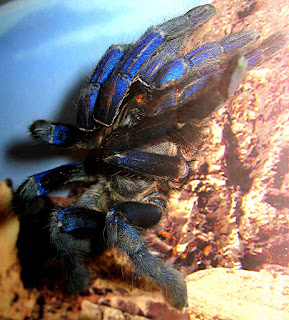 A very striking, known species of blue spider – the  aptly-named cobalt blue tarantula Haplopelma lividum, from Myanmar and Thailand, which was formally described and named as a new species as recently as 1996 (public domain)

This ShukerNature blog article is a modified version of a news item that I wrote in 2015 for one of my Alien Zoo columns in Fortean Times, and my grateful thanks go to Carl Portman for very kindly permitting me to include his blue devil photograph.