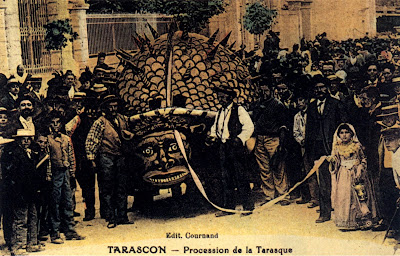 Tarasque festival at Tarascon, in Provence, France, with girl in white and holding leash on right of picture representing St Martha (Hand-coloured postcard from 1905)

The legend of the tarasque was the very first dragon account that I wrote for my book Dragons: A Natural History (Aurum Press/Simon & Schuster: London/New York, 1995) – the bestselling dragon book of all time, translated into over a dozen languages, and still in print today, 17 years after it was first published. Now, as a ShukerNature exclusive, here is the original but never-before-published, unabridged version of that account:


Medieval France was a time and a land of lingering, legendary monsters - anachronistic abominations left over from primeval ages. Singularly horrific was a neo-dragon called the tarasque - spawned by the biblical monster Leviathan, and originally from Galatia in Asia Minor, but which had come to haunt the banks of the River Rhône.

Evening was drawing in, and a traveller named Jacques du Bois quickened his step as he journeyed along the bank of the Rhône between Avignon and Arles in southern France. Nervously, he scanned the river's sable waters and the forbidding gloom of its fringing woodlands - his eyes questing for something that he fervently prayed he would not see. 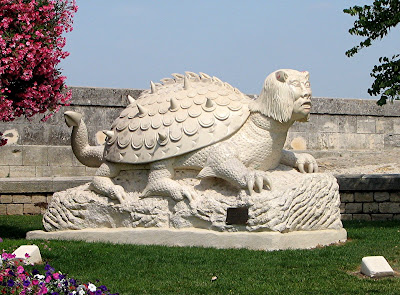 Tarasque sculpture near King René's castle in Tarascon; completed in 2005, it was created by Pascal Demaumont from a single block of marble weighing 25 tonnes!

Du Bois had heard terrifying rumours that a hideous creature called the tarasque had lately taken up residence along this stretch of the Rhône. Here it held in thrall the hapless populace of nearby Nerluc, a once-tranquil rural town whose inhabitants and livestock were now the focus of its relentless depredations. But it also devoured any wayfarer unfortunate enough to be passing this way and unwary enough not to sense the monster's proximity.

Distracted by these grisly thoughts flowing unchecked through his mind, the traveller fatally ignored a deep thunder-like rumble emanating from a shadowy glade just ahead. Suddenly, the glade seemed to erupt - disgorging from its hidden bowels a macabre vision spawned from the darkest of nightmares. 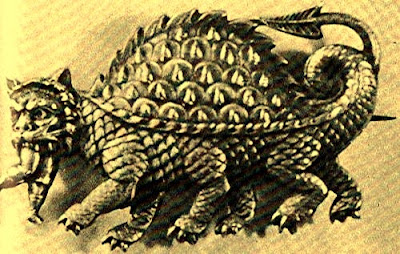 Larger in size than the biggest horse or burliest ox, the tarasque stood on six powerful limbs equipped with the murderous paws of a giant bear, and furiously switched its long viperine tail from side to side like living whipcord. The magnificent mane of its leonine head flowed as a burnished sea of molten gold around its shoulders, and its teeth were great ivory daggers of death. Most extraordinary of all, however, was the massive carapace encrusting its back. Resembling the shell of a colossal tortoise, it bristled with an armoury of mighty spikes, rendering the monster invincible to any form of attack.

It was for good reason, therefore, that the ill-fated Jacques du Bois knew his life to be at an end - an end so swift that he did not even have time to scream. As he gazed motionless at his destroyer, like a songbird mesmerised by the hypnotic stare of a serpent, the tarasque opened its fearsome maw and let out a deafening roar - accompanied by a stream of blazing fire that curled around its luckless victim and ignited his flesh like tinder. 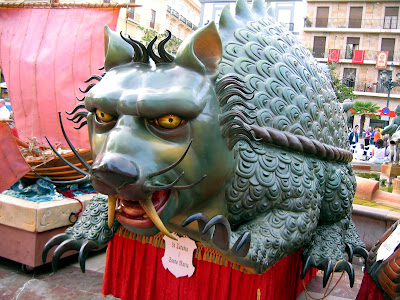 As time went by, the inhabitants of Nerluc grew ever more desperate to free themselves from the tarasque's unremitting tyranny. One one occasion, 16 of the town's bravest men marched out to do battle with their adversary - but all to no avail. In a matter of moments, half of their number had been incinerated by a single blast of flame belched from the monster's gullet, and the remaining octet fled back to Nerluc, fortunate to have survived their ordeal by fire.

Nerluc seemed doomed, destined for destruction - but then there came along someone who may well have seemed, at least to an outsider, to be the most unlikely dragon vanquisher of all time. One day, a small boat docked at the nearby port of Saintes-Maries-de-la-Mer, and out of it stepped a young, lissom maiden, with fresh complexion and a simple dress of purest white. She had journeyed here from Arles, from where her fame had spread far and wide. For this unassuming figure of gentle demeanour was Saint Martha - whose inspirational preaching and acts of selfless beneficence had brought joy and hope to all who met her. 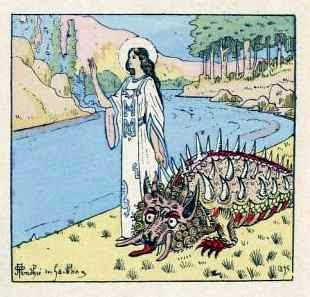 St Martha and the tarasque - an exquisite illustration from 1895

As soon as her arrival became known, the townspeople of Nerluc flocked to her and tearfully implored her to free them from the oppression of the tarasque. In reply, Saint Martha promised to do all she could for them, and, without further ado, she journeyed through the outlying fields towards the Rhône-bordering forest that harboured her fire-breathing quarry. She did not have to search for long. Within a few minutes of entering the forest's verdant interior, she spied the tarasque in a sunlit clearing - devouring the final portion of its latest victim, a local herdsman. 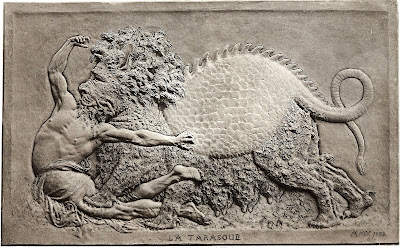 So intent was the monster upon its gory repast that it remained totally unaware of her presence. This enabled the saint to approach to within touching distance of its gleaming carapace and rippling mane - and also to pick up two branches that had been recently charred by its conflagrating breath. In that moment, however, the tarasque sensed her, and whirled around, its rapacious eyes ablaze with paroxysms of flame like febrile, dancing infernos.

Instantly, Martha raised the two branches in front of her, and held them before her monstrous adversary in the shape of the Cross. As she did so, the tarasque's eyes dimmed, their incandescence replaced by a mellow golden hue, and the mighty creature lay passively at the saint's feet, overcome by a welter of bemusement and unwonted peace. Martha bent down and sprinkled holy water all over the subdued dragon. Then with braids of her own hair she wove a huge collar and lead with which she led it amiably back to Nerluc. 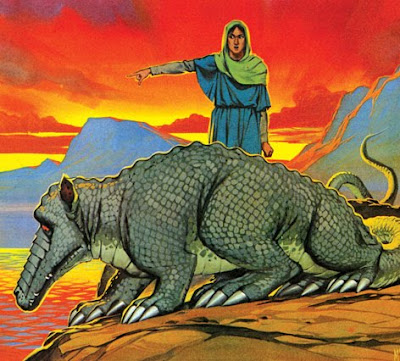 This astonishing spectacle - the bloodthirsty tarasque, tethered and tame as a docile puppy! - initially rendered the townspeople speechless and immobile. Once their fear of their longstanding enemy had subsided, however, they grew bolder, coming up to the beast and touching it - then hitting, punching, and kicking it, and hurling rocks and sticks at it, as their anger at its former atrocities burst forth in an uncontrollable tide of hatred and revenge. The tarasque cowered in fright at this sustained onslaught, and Saint Martha pleaded with the horde to forgive the beast and let it live in its new, transformed state - but it was too late. Whether through direct physical attack or the almost tangible weight of loathing heaped upon it, the tarasque suddenly rolled over, and died. 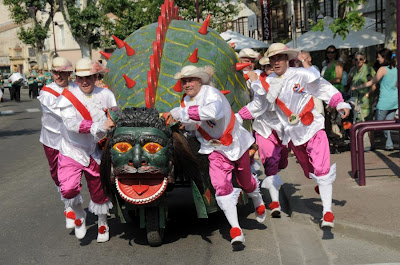 The 2011 tarasque parade at Tarascon

Even today, this monster's memory is still manifest here. As a lasting reminder of its former tribulations, Nerluc is nowadays called Tarascon, it stages a tarasque festival each Whitsun, and its official seal depicts this erstwhile oppressor in all its terrible splendour.

Due to its exceptional morphology, cryptozoologists rarely seek to identify the tarasque with any known type of animal, either from the present or from the past. Having said that, over the years I have encountered one or two brave attempts - in which this extraordinary neo-dragon has been variously mooted as a surviving ankylosaur dinosaur or a lingering glyptodont (gigantic armadillo-like mammal from prehistoric South America). Ingenious suggestions, certainly, but tragically flawed by the unavoidable fact that no ankylosaur or glyptodont unearthed so far by palaeontologists happens to possess six legs! 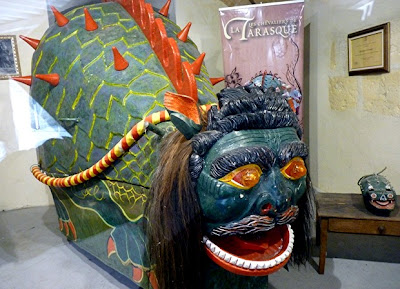