SRI LANKA’S DEVIL BIRD – INVESTIGATING A DEVIL OF A MYSTERY

Back in the early 1980s, one of the most popular TV series was ‘Arthur C Clarke’s Mysterious World’. Opening one episode devoted to cryptozoology, the show’s eponymous star briefly mentioned two Sri Lankan mystery animals – the horned jackal and the devil bird. Not having heard of either of these before, and discovering that they were not mentioned further in the show itself, I carried out extensive researches into both of them, and took as my initial source and starting point the man himself, Arthur C. Clarke, who in response to my enquiries very kindly provided me with much information and further sources of reference. As I have documented elsewhere, the horned jackal turned out to be little more than a morphological fluke, but the devil bird is more intriguing. Also called the ulama, it takes its English name from its truly hideous cry, graphically described as resembling the sound that would be made by a boy being slowly strangled!

What makes this crypto-case especially unusual, moreover, is that although its eldritch cry has been heard on countless occasions by all manner of reliable ‘earwitnesses’, sightings of the bird responsible are virtually non-existent. As discussed fully in my books From Flying Toads To Snakes With Wings (1997) and Extraordinary Animals Revisited (2007), identities put forward include various owls, nightjars (notably Sri Lanka's highland nightjar Caprimulgus indicus kelaarti), raptors, and assorted reclusive water birds such as rails, herons, and crakes. One rare, decent sighting described a long tail and a nightjar-like shape, despite sceptics claiming that it is nothing more than Sri Lanka’s well known brown wood owl Strix leptogrammica ochrogenys or the larger, familiar Sri Lankan or spot-bellied eagle owl Bubo nipalensis blighi. (Yet if it is indeed a well known bird, surely its identity as the voice of the devil bird would have been firmly established long ago?) 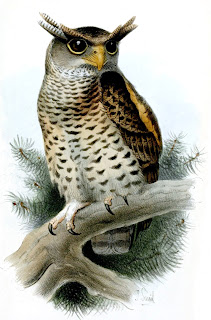 In July 2001, an abandoned immature Sri Lankan eagle owl was rescued from a flock of attacking crows in a forest by some villagers, and it was subsequently claimed for a time on some websites that this specimen perfectly matched native descriptions of the devil bird, and that the devil bird mystery had therefore been solved. Yet, as has been already noted here, the very crux of the devil bird dilemma is that detailed sightings of it are all but non-existent – it is its cry, not its appearance, that is well-documented. Consequently, I fail to see how that rescued eagle owl specimen could be confirmed to be a perfect match with an infamously elusive bird whose morphology is largely unknown, except, that is, for its long tail – which does not match that of the Sri Lankan eagle owl!

Could it be, therefore, that a still-unknown species of bird genuinely exists amid the dense forests of this tropical island? It is certainly a more rational explanation than one that seeks to shoehorn an ill-fitting known identity into the uniquely-shaped (and sounding!) crypto-box presently dubbed the Sri Lankan devil bird.