THE GRIFFINS AND THE FROG RAIN

My grandmother Gertrude Timmins (with my dog Patch), who experienced a frog rain when she was a girl during the early 1900s (Dr Karl Shuker)

One of the oddest enigmas of nature is the widely-reported phenomenon of frog rain - i.e. unaccountable falls of frogs down to earth from the sky, sometimes in appreciable numbers and usually (but not always) during a shower of rain. Sceptics attempt to explain this weird occurrence away by suggesting that the frogs in question were merely lurking unseen in ground-level vegetation, and were flushed out of cover by the rain, thereby creating the illusion that they had actually fallen down from the sky with the rain. However, there are various cases on file in which it is clear that the frogs really did fall from above. These cases include the following one - which happened to a member of my own family.

In or around 1902, when she was about 8 years old, my maternal grandmother, Gertrude Timmins (née Griffin), was walking with her mother, Mary Griffin, across a field in what is now the town of West Bromwich, in the West Midlands, England. As they were walking, it began to rain, so they opened their umbrellas, but a few moments later Gertrude felt a great number of quite heavy thumps on top of hers. When she peered out from beneath it, she saw to her amazement that the objects responsible for the thumps were small frogs - dropping down from above, hitting the top of her umbrella, bouncing off it, and falling to the ground around her feet. She became quite frightened, but her mother assured her that there was nothing to fear, informing her in a wholly matter-of-fact manner that it was merely a frog rain, and that the frogs would stop falling soon - which they did. This dramatic incident left such a vivid impression in my grandmother’s mind that right up to her death in 1994, at the age of 99, she could still readily recall all of it.

This is the species, the European common frog Rana temporaria, to which the specimens encountered by my grandmother would have belonged (Richard Bartz/Wikipedia)

Why this case is so significant is that the frogs had actually been cascading down on to the tops of the umbrellas, confirming that they had not merely emerged out of undergrowth on the ground when the rain began. Moreover, there were no buildings or trees nearby from which they could have dropped – always assuming that they could, or would, have found their way onto such structures anyway. In short, the only place where the frogs could have come from was the sky.

The most popular theory for zoological falls is that the creatures in question have been lifted from their normal terrestrial or aquatic abodes by a whirlwind or waterspout, carried some distance through the air, and then dropped back down to earth. Initially, this seems quite a reasonable solution - until it is realised that these falls are almost always species-specific, i.e. a given animal fall normally contains only a single species. Moreover, it does not usually contain any mud, vegetation, or any other substratum either - just the single animal species. 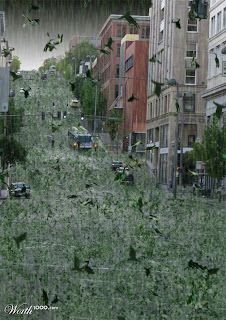 Yet how could a waterspout or whirlwind be so extraordinarily selective, just lifting members of one species (e.g. of frog, or fish, or snail), and leaving all other animal species in the same locality uncollected, and not even lifting up any substratum? It is this baffling specificity, this unexpected paucity of mixed showers, that poses such a problem when attempting to accept the vortex explanation for animal falls.

This ShukerNature post is excerpted from 'It's Raining Sprats and Frogs' – a chapter from my book Dr Shuker's Casebook: In Pursuit of Marvels and Mysteries (CFZ Press: Bideford, 2008). 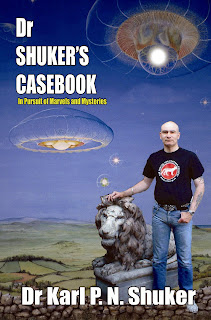