THE SMILE ON THE FACE OF THE MANTICORE AND LEUCROCUTA

Manticore, from Edward Topsell's The History of Four-Footed Beasts (1607)

“I know you,” whispered Strange again. “You are...You are...” He moved his hands through the empty air as if tracing magical symbols. “You are a Leucrocuta!”...

“You are the Wolf of the Evening! You prey upon men and women! Your father was a hyena and your mother a lioness! You have the body of a lion; your hooves are cloven. You cannot look behind you. You have one long tooth and no gums. Yet you can take human shape and lure men to you with a human voice!”

Medieval bestiaries contain many monsters, but few are stranger or more sinister than the following pair of feline fabulosi.

Combining the stature and body of a red lion, with the head and leering face of a bearded man (but sporting no less than three separate rows of shark-like teeth in each jaw), and the sting-tipped tail of a scorpion (which also bore a series of long spines that could be hurled from it with deadly accuracy at any would-be foe), the manticore was a rapacious beast originally from Persian mythology. However, it also entered European folklore after being documented in a now-lost book on India by Ctesias (a Greek physician and historian at the Persian court of King Artaxerxes II in the 4th Century BC), and later appeared in many medieval bestiaries. Not only did this ferocious monster attack and devour any human that it met, it even consumed their bones, clothes, and any belongings that they had with them, thus leaving behind not the slightest trace of its victim’s former existence.

A manticore in Liber de Proprietatibus Animalium, a 16th-Century bestiary

Zoologists have attempted to identify the manticore with the tiger (or even as a shape-shifting were-tiger), but there is scant – if, indeed, any? – similarity between the two creatures. Its sting-tipped tail has been explained by the occasional prominent presence of a horny claw-like structure at the extremity of a tiger’s tail. However, such structures are regularly present at the tip of lions’ tails, as well as those of leopards and even domestic cats on occasion, so this is hardly a characteristic exclusive to tigers. Equally unsatisfactory are claims that the manticore’s triple row of teeth was merely a misunderstanding based upon the fact that each molar of a mammalian carnivore bears three cusps or lobes. And why, if the manticore were indeed based upon a tiger, did it lack that great cat’s most distinctive feature – its stripes? (Incidentally, fantasy artwork featuring the manticore often gifts it with a pair of large bat-like wings, but this is a modern invention, which does not appear in early sources.)

Somewhat akin to the manticore but less well known was another mythological Asian monster – the leucrocuta (also spelled ‘leucrocota’, ‘leucrocotta’, 'crocotta', and other variants). Sometimes confounded in bestiaries with the hyaena (whose spotted species has been given the zoological name Crocuta crocuta), and said to frequent Ethiopia or India, the true leucrocuta was believed to be the hybrid offspring of a male hyaena and a lioness, but exhibited various features not possessed by either of these creatures - such as its hoofed feet, and, instead of normal separate teeth, having only a single unbroken ridge of bone in each jaw, forming one long continuous tooth without any gum.

A bestiary portrayal of the leucrocuta

Other characteristics included the head of a badger, the limbs of a stag, a lion’s neck, breast, and tail (as well as its bravery), a stature approaching that of a male ass coupled with the speed of a horse and the strength of a bull, plus an invulnerability to any weapon made of steel. Most bizarre of all, however, was its extraordinarily wide mouth, which allegedly stretched right back to its ears in a thoroughly unnerving grin!

Just like the manticore, the leucrocuta was a man-eater, but was much more cunning, luring its victims out of their houses at night by calling their names in a perfect imitation of a human voice. Indeed, and again like the manticore, the leucrocuta was often claimed to be a shape-shifter, able to adopt human form in order to increase the success of its voice’s ability to draw its victims within reach of its deadly jaws.

Even in modern times some vestigial fear of these man-faced, horror-jawed, semi-feline were-beasts survives. As recorded in Peter Costello’s book The Magic Zoo: The Natural History of Fabulous Animals (1979), novelist David Garnett revealed that in 1930, while visiting Spain, one of his friends, a Mr Richard Strachey, was mobbed by sedentary gypsies living in the Andalusian village of Ugijar after his beard led to his being mistaken for a manticore.

More recently, in 1964, Garnett learnt that another friend, an English lady who had stayed one evening with a bearded male companion at a small inn near the Alhambra Palace in Granada, Andalusia, was approached the next morning by the inn’s greatly-perturbed hostess, who revealed that all of her staff (hired from the local peasant population) were leaving straight away, because they believed that the lady’s male companion was a manticore who would steal their babies at night, cut them up, and eat them! Despite doing her best to assure their hostess that he would do nothing of the sort, the lady was only able to convince the peasants that her companion was human when she publicly kissed and caressed him while they all watched, hidden from his view, at a safe distance! 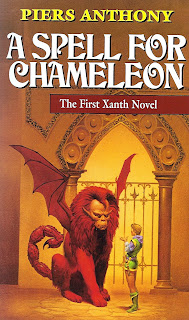 A winged manticore on the front cover of Piers Anthony's A Spell For Chameleon - one of my all-time favourite fantasy novels, and the first in Anthony's long-running Xanth series (Del Rey Books)

If such remarkable beliefs persist regarding the manticore, what about the leucrocuta? Perhaps it may be best, just in case, to view with extreme caution any stranger who calls your name and then greets you grinning, quite literally, from ear to ear!

This ShukerNature article is excerpted from my latest book, Cats of Magic, Mythology, and Mystery: A Feline Phantasmagoria (CFZ Press: Bideford, 2012), which is now available to pre-order at www.catsofmagicmythologyandmystery.com and is due to appear on Amazon within the next few days.