THE CELESTIAL STAG – A STINKER OF A BEAST FROM CHINESE FOLKLORE

While browsing online recently, I came upon a fantasy painting entitled 'Stag of Heaven' that was so exquisite it inspired me to write a short poem featuring the divine creature depicted (click here to read my poem and view the painting in question on my Starsteeds poetry blog).

The painting's title also recalled to my mind the real celestial stag – if we can truly apply the word 'real' to anything that is entirely folkloric in nature. However, this latter entity is a very different animal indeed – a decidedly macabre one, in fact.

Indigenous to the exceedingly imaginative realms of Chinese mythology, little is known about the celestial stag (also referred to more specifically as the celestial roe), for the very simple reason that it is very rarely seen. What is known, however, has been succinctly summarised as follows by Jorges Luis Borges in his classic work The Book of Imaginary Beings (rev. ed. 1974):

"We know absolutely nothing about the appearance of the Celestial Stag (maybe because nobody has ever had a good look at one), but we do know that these tragic animals live underground in mines and desire nothing more than to reach the light of day. They have the power of speech and implore miners to help them to the surface. At first, a Celestial Stag attempts to bribe the workmen with the promise of revealing hidden veins of silver and gold; when this gambit fails, the beast becomes troublesome and the miners are forced to overpower it and wall it up in one of the mine galleries, It is also rumoured that miners outnumbered by the Stags have been tortured to death.

"Legend has it that if the Celestial Stag finds its way into the open air, it becomes a foul-smelling liquid that can breed death and pestilence."

Yet despite its apparent anonymity, the celestial stag has been depicted by several artists and sculptors, with the illustration opening this present ShukerNature blog post being perhaps the best known example. 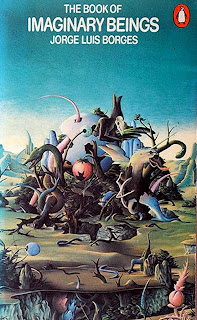 The Book of Imaginary Beings (artwork by Peter Goodfellow)

Another popular depiction of this creature is as a black stag with blank eyes. However, writing about it in his book Chinese Ghouls and Goblins (1926), which was the original source of Borges's above-quoted information, British author Gerald Willoughby-Meade (who in turn derived his data on it from 18th-Century Chinese scholar Yuan Mei's tome Tsu Pu Yuh) suggested that perhaps 'celestial stag' was a mistranslation of its original Chinese name - because in traditional Chinese folklore it does not appear to share any affinity with any kind of deer, and is of subterranean not celestial abode.

The author responsible for coining this name for it was Dutch Sinological historian Jan J.M. de Groot (1854-1921), who wrote about it as follows in his six-volume treatise The Religious System of China (1892-1910):

"Celestial roes are not men, but belong to the class of kiang si or corpse-demons…Yunnan province has many mines from which five kinds of metal are extracted. If they collapse, preventing the miners from getting out, then, if these men are fed for ten years or even for a hundred by the breath of the earth and of those metals, their bodies do not decay. Though they are not dead, their material substance is dead.

"It being underground perpetual night for those who work those mines, these men mostly carry a lamp on their forehead. When, while working their way into the ground, they fall in with a celestial roe, this is entranced with joy. Complaining of cold, it asks them for some tobacco, which it smokes immediately; then it prostrates itself upon the ground, entreating the men to take it out of the mine. In reply the miners say: 'We have come here for gold and silver, and we have not yet discovered any veins from which to procure some; do you know where the gold grows?' And the celestial stag guides them to a mine where they can reap a rich harvest. But on leaving the mine, they delude the spectre, saying: 'We must get out first, and then we shall take you out of the shaft with the lift'. And by the rope fastened to the bamboo lift they haul the creature up, but halfway they cut the rope, letting it fall down and die.

"It has occurred that the men in charge of the mine-sheds were more benevolent and compassionate, and hauled up some seven or eight of those beings. But as soon as these felt the wind, their clothes, flesh and bones changed into a liquid giving out a rancid, putrid stench, which smote with contagious disease all those whose olfactory nerves it affected, so that they died.

"This is the reason why, ever since, those who haul up celestial stags cut the rope, lest they have to endure again that stench and lose their lives. Should they refuse to haul them up, they risk being molested by them incessantly. It is also said, that when a small number of celestial stags are overpowered by a great number of men, tied, placed against an earthen wall, and immured firmly on the four sides with walls of clay, a sort of terrace with a lamp being built overhead, they will do no further harm. But if men are outnumbered by stags, they are tormented to death by these, and not allowed to escape."

This account readily recalls stories from Western folklore of knuckers, kobolds, and other underground entities of generally malign or at least mischievous nature – far removed indeed from visions of heavenly harts or other deer of divine demeanour! 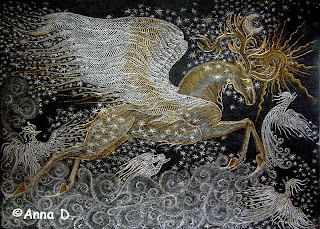