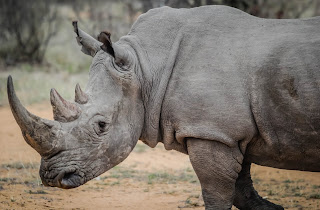 There was the forest three-horned dark rhino that would be in small herds that would occasionally run into the snares of man. These forest rhinos were deemed by many as a prized possession.

The three-horned rhinoceroses referred to in the above quotation are fictitious, but factual records do indeed exist of rhino specimens possessing extra (supernumerary) horns. Of the five species of rhinoceros alive today, two of them (the great Indian Rhinoceros unicornis and the Javan R. sondaicus) each typically sports one horn, whereas the other three (the Sumatran Dicerorhinus sumatrensis, African white Ceratotherium simum, and African black Diceros bicornis) each typically sports two. Very rarely, however, exceptions to this standard rule arise, and as reported widely in the media during late December 2015 one such exception has lately been encountered and photographed in Namibia's Etosha National Park by 73-year-old Jim Gibson.

Eschewing its species' normal two-horn condition (and its taxonomic name too), the adult black rhinoceros Diceros bicornis (translating as 'two-horned two-horned') in question also bears a slender but distinctive, forward-curving third horn, sprouting forth from the centre of its brow (click here to see photos of this singular beast, and here to view a short video clip of it). Its extra horn would not cause this rhino any discomfort; and if resulting from a non-genetic developmental abnormality occurring when the rhino was a foetus, it would not be inherited by any of its offspring. If caused by a mutant gene, however, it could be inherited - this latter situation probably explaining why triple-horned black rhinoceroses were once quite common around Zambia’s Lake Young.

On 10 February 1906, big game hunter Abel Chapman shot a three-horned black rhinoceros at Elmenteita in British East Africa (now Kenya), and a photograph of Chapman posing alongside its head subsequently appeared in his book Retrospect: 1851-1928 (1928). That same book also included a drawing of this animal. And a similar specimen was exhibited alive at Lisbon Zoo, Portugal, as documented in two International Zoo Yearbook reports of 1978. 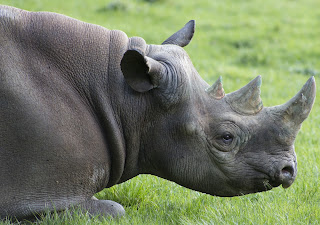 Three-horned examples of unspecified two-horned rhinoceros species in southern Africa were alluded to by Swedish explorer-naturalist Charles J. Andersson in his book Lake Ngami (1861), which documented his four years spent exploring southwestern Africa, including time spent during 1854 at this nowadays very famous but then newly-discovered lake in Botswana:

I have met persons who told me that they have killed rhinoceroses with three horns; but in all such cases (and they have been but few), the third, or posterior horn is so small as to be scarcely perceptible.

In most cases, the extra horn is usually nothing more than a small, rounded knob - a rudimentary third horn positioned behind the two normal ones. Similarly, towards the end of the 19th Century, London Zoo exhibited a female great Indian rhinoceros that bore a rudimentary second horn upon her forehead. Alternatively, a pseudo-third horn can develop via the splitting into two of one of the normal, pre-existing horns, as seen in the following photograph of one such zoo specimen: 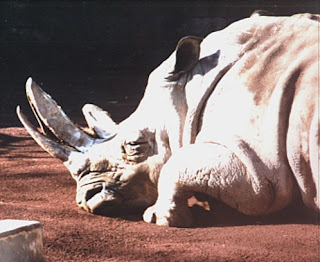 Occasionally, even more extreme cases are recorded. One such individual was the abnormal female black rhinoceros shot during August 1904 in a dense covert west of Kenya’s Jambeni Mountains, at an elevation of 4150 ft above sea-level, and reported by Colonel W.H. Broun in the Proceedings of the Zoological Society of London on 14 November 1905. In addition to the two normal horns, this rhino had a third, rudimentary horn between its ears, plus a fourth, equally diminutive example located about 4 in further back.

During his extensive black rhinoceros researches, renowned German zoologist Dr Bernard Grzimek encountered reports of a five-horned specimen, and even of rhinos with horns growing out of their bodies. He also suggested that the famous woodcut of a great Indian rhinoceros bearing an incongruously-sited horn on its shoulder produced by Albrecht Dürer in 1515 (and later copied by Conrad Gesner in his Historiae Animalium, Liber I, 1551) may have been truly based upon an abnormally horned specimen. 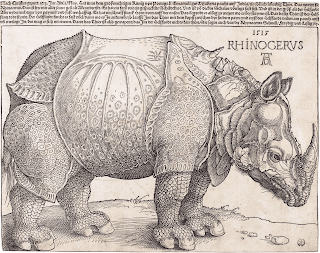 At one time, this idea was discounted in favour of the theory that the horn was either an error on the part of Dürer, or, if genuine, merely an excrescence developed by the rhinoceros in question during its long confinement in the ship bringing it from India to Portugal’s King Manuel the Great, at Lisbon (the king then offering it up as a gift to Pope Leo X). Moreover, as discussed in 1961 via an entire paper on the subject written by Dr K.C.A. Schulz and published in African Wild Life, rough sores of a horny nature have been observed for some time among black rhinos too.

At present, the precise reasons for the development of extra horns by rhinoceroses remain relatively unclear. In some cases, a genetic origin is indicated, especially when they involve several multi-horned specimens inhabiting one specific locality, as with the Lake Young individuals. Injury-induced development (echoing the ‘excrescence theory’ for Dürer’s specimen) may also occur - as documented from various antelopes and deer possessing supernumerary (and often oddly located) horns, sometimes emerging from the forehead, face, or even sites on the body. 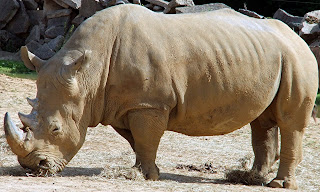 NB – As noted in their respective credits above, all of the photographs of three-horned rhinoceroses included here have been created by me via digital manipulation of existing photographs of normal two-horned specimens, because although, as this present article of mine unequivocally demonstrates, rhinos with supernumerary horns are a reality, I am not aware of any existing photos of such specimens other than those of the above-documented Namibian individual and the photo in Abel Chapman's book depicting him alongside his three-horned rhino head (unfortunately, however, I have so far been unable to obtain sight of this latter picture). Consequently, if anyone knows of any photographs depicting supernumerary-horned rhinos, or drawings based upon documented specimens of such creatures, I would greatly welcome details.

Finally: if three-horned rhinoceroses are not exotic enough for you, how about three-humped camels and a bull African elephant with two trunks? If you think that I'm joking, be sure to click here on ShukerNature and discover that I'm not!

This ShukerNature blog article is excerpted and greatly expanded from my book Extraordinary Animals Revisited. 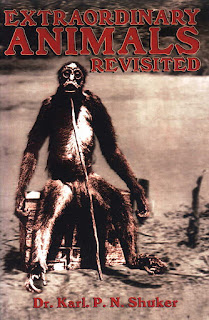