IN SEARCH OF THE ELUSIVE SCARLET VIPER 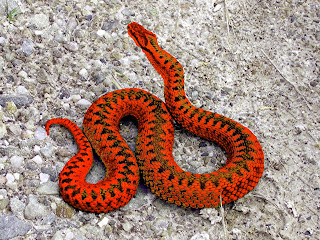 It is well known that the adder or European common viper Vipera berus occasionally produces albinistic and melanistic individuals, due to the expression of certain mutant gene alleles. I was fortunate enough to see a bona fide black adder myself (and not of the Rowan Atkinson variety either!) when visiting Woody Bay, North Devon, back in 1993. Of course, these are not separate species, merely genetically-induced colour varieties (morphs) of the common adder.

As recently as the early 1900s, however, many natural history tomes were still soberly stating that Britain was also home to a much more remarkable, additional viperine form, one so distinct in fact that it was classed as a separate species in its own right – Vipera rubra, the scarlet or small red viper. As its names suggest, this eyecatching serpent was bright red in background colour, with a brown rather than a black dorsal zigzag stripe, and was claimed to be somewhat smaller than the normal adder. It was also said to have once been widely distributed across England (as well as certain parts of Scotland), but never common anywhere, except perhaps in southern Dorset - particularly around Corfe Castle, and also Lulworth Cove according to a short Pet Reptiles article from 2001 by CFZ founder Jonathan Downes.

In those latter areas, the scarlet viper was apparently a familiar sight, which makes it all the more surprising that nowadays it is ostensibly long-vanished, and not only from such localities either, but from the natural history literature too, almost as if this enigmatic snake had never existed. Surely that would not have occurred if it were truly a valid species - but was it? Could it simply have been an unusual colour variety of no taxonomic significance?

It is not as if a scarlet viper would be such an unlikely, improbable herpetological entity. Occurring in a vast range of different animal species, there is a genetically-inherited condition analogous to albinism and melanism that is known as erythrism, and individuals exhibiting it (often referred to colloquially as red phase specimens) are abnormally red in colour. Erythristic iguanas, for instance, are bright orange-red instead of their normal green shade. Consequently, an erythristic adder would make a very plausible scarlet viper. Indeed, I have discovered that red phase individuals have been recorded from certain other viper species too, including the Central African bush viper Athens squamigera (a colour photograph of which, snapped by David A. Barkasy, can be viewed here,  and several photos of a rainforest-encountered specimen snapped by Mark Kostich are available at Getty Images).

Furthermore, body size is often linked to the mutant gene alleles causing these colour morphs. Melanistic leopards and jaguars, for instance, tend to be larger than their normal-coloured spotted counterparts. So the scarlet viper's smaller size could simply be another facet of the mutant erythristic gene allele's phenotypic expression (rather than being an age-related aspect; in the past, some naturalists had proposed that all scarlet vipers were juvenile specimens on account of their small size). Multi-potent alleles are referred to as pleiotropic, effecting changes to more than one facet of an individual's outward appearance (or even its physiology in some cases).

Colour morphs tend to arise spontaneously across the full extent of their species' distribution range, yet are often of only very localised occurrence within any one region of that full distribution range (the latter anomaly being caused by genetic drift). Needless to say, this unusual pattern of distribution corresponds precisely with that of the scarlet viper as reported in Britain. And because of this latter colour variety's rarity both generally and locally, it is very likely that any mutant allele causing its erythristic state is recessive, i.e. expressed only by individuals possessing two copies of it.

Unlike many snake species, Vipera berus is sexually dimorphic in terms of colouration. Whereas the background colour of normal female adders is typically brown, in normal male adders it is typically grey. However, I have yet to uncover any unequivocal accounts of male scarlet vipers or even of pairs of such snakes, let alone any scarlet viper populations, so this very distinctively-hued serpent's occurrence in Britain may well have been due to a mutant erythrism-inducing gene allelle that was sex-linked - as with the mutant allele responsible for tortoiseshell cats, for instance, which are almost always female, thus meaning that the scarlet viper was based entirely upon sightings of abnormally red female adders.

And indeed: within his book Reptiles and Amphibians in Britain (1983), part of the 'Collins New Naturalist Series' and one of the very few modern-day books even to mention this serpent form, Deryk Frazer stated:


"The 'little red adder' of early herpetologists is a colour phase found in some juvenile females, which eventually become less distinctively coloured."

(In fact, I have now traced accounts of confirmed adult female adders that were red, so the "juvenile" reference in Frazer's above-quoted statement regarding the scarlet aka little/small red viper/adder can be disregarded.)

Mystery solved? Very probably - after all, every aspect of the scarlet viper's morphology and widely-scattered but everywhere-localised distribution in Britain is consistent with its identity being that of an erythristic morph of V. berus. And, excitingly, I have even been shown by German correspondent Dr Guntram Deichsel a colour photo snapped by him as recently as 3 May 2006 that depicts a pair of adders in Dorset's New Forest Reptiliary of which the female member is undeniably red, i.e. a bona fide scarlet viper.

So this eyecatching serpent morph is still occurring in Britain after all (and judging from various comments posted below by readers as well as communications received directly by me, such snakes are still arising in Germany and Denmark too).


A normal adder with a white-lipped black adder - yet another interesting colour variety exhibited by V. berus ((c) Guntram Deichsel)