LUMINESCENT BIRDS OF PARADISE IN BORNEO?

On the morning of 5 September 2013, I was browsing through my newly-arrived copy of Flying Snake (vol. 2, #2; July 2013), a copy of which had been kindly sent to me by this periodical's founder/editor Richard Muirhead, when I came upon a very interesting article written by cryptozoology enthusiast Carl Marshall from the Stratford upon Avon Butterfly Farm documenting a visit to Malaysian Borneo by him and Butterfly Farm colleague Andrew Jackson during March 2013 in order to study its ecology and biodiversity.

In his article, Carl listed several putative cryptids described to them by various inhabitants. Due to my longstanding interest in mystery birds, the entry in this list that attracted my especial interest was the following one:

Ulu Kamanis is situated in Sabah (formerly known as North Borneo), which is one of two Malaysian states present on the island of Borneo; Sarawak is the other one. Sandwiched between Sarawak and Sabah is the independent sultanate of Brunei, with all of the remainder of Borneo being part of Indonesia and generally referred to as Indonesian Borneo or Kalimantan.

By a most fortunate coincidence, Carl and I had already arranged to meet up during the afternoon of this very same day, 5 September, at his home just outside Stratford in order for me to collect the magnificent taxiderm specimen of a horned hare whose preparation he had very kindly arranged as a gift (click here for further details) – thanks Carl! 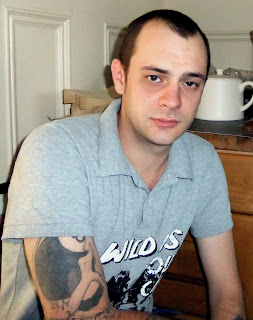 Consequently, while visiting him there, I made a point of asking him whether he could supply me with any further details re Malaysian Borneo's luminescent birds of paradise, and he promised to email me the few details that he had obtained while out there.

True to his word, Carl duly sent me the following email two days ago:

"I thought I would send you a quick email about those luminous birds from Borneo with as much info as I can provide.


"They were described to me as fairly large birds that are are occasionally seen in forest clearings at Ulu Kamanis in Sabah. They are usually seen at dusk and appear not to be truly light emitting, but rather merely possessing a highly elaborate iridescent plumage.


"My theory is that these resplendent birds might be of the family Paradisaeidae, as during conversations with Matthew Lazenby (Jigger) an eye witness who lives in this area described these birds as matching very well with an unknown bird of paradise species.


"Our local guide Innus also reiterates these descriptions from his own experiences and agreed with my theory that these iridescent birds are possibly of this classification.


"I hope this is of interest."

Indeed it is – thanks again Carl!

Currently, 41 species of birds of paradise (family Paradisaeidae) are recognised by ornithologists, of which the vast majority are exclusive to the island of New Guinea or various smaller offlying ones. Two additional species (both belonging to the rifleman genus Ptiloris) are endemic to Australia, however, and a further two (the paradise crow Lycocorax pyrrhopterus and Wallace's standardwing Semioptera wallacii) are endemic to the Moluccas (Maluku) islands of Indonesia.

As the Moluccas are separated from Sabah in the northernmost portion of Borneo only by the interposition of the Celebes Sea and from the remainder of Borneo only by the Indonesian island of Sulawesi (Celebes), it would not require too dramatic a stretch of zoogeographical imagination to conceive how a species of bird of paradise might exist in Borneo.

Nevertheless, until more precise details concerning their basic form and plumage can be obtained, the iridescent mystery birds of Ulu Kamanis cannot be assigned with any degree of certainty to Paradisaeidae, or indeed to any other avian family. But as Carl and Andrew plan to return to Sabah in 2014, we may not have too long to wait for such details to be forthcoming! 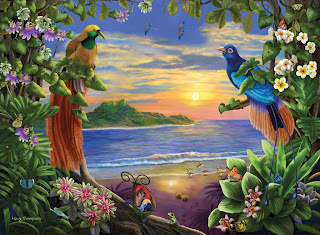