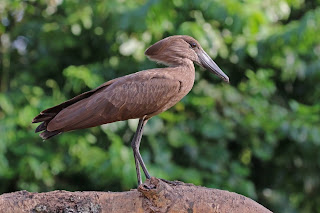 The mysterious hammerhead – a meteorological mage? (© Charles J. Sharp/Wikipedia – CC BY SA 4.0 licence)
In my previous ShukerNature article (click here to access it), I reviewed the remarkable history of a truly remarkable bird, the shoebill Balaeniceps rex. Now, in this present ShukerNature article, I turn my attention to its somewhat smaller but no less extraordinary close relative, the hammerhead.

Just under 2 ft long and resembling a short-legged stocky heron with sombre earth-brown plumage, the hammerhead (aka hamerkop, hammerkop, and hammerkopf – all of Afrikaans origin) derives its names from its long, backward-pointing crest which, when carried horizontally, resembles the nail-pulling end of a claw hammer. Moreover, as its crest and its large pointed beak collectively resemble the outline of an anvil, this peculiar bird is also known as the anvil-head. 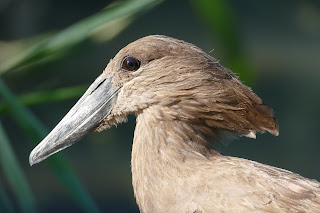 Widely distributed along the riverbanks, marshes, and ponds of tropical Africa, Madagascar, and Arabia, the hammerhead was first brought to scientific attention during the mid-1700s, in Senegal, by French traveller-naturalist Michel Adanson. In 1760, it was formally described by French zoologist Marthurin J. Brisson, who assigned it to a new genus, Scopus, to which its species name, umbretta, was added in 1789 by German zoologist Johann Gmelin. Its full binomial name thus translates as 'with broom and small shade'. Explaining this seemingly odd choice of name, the hammerhead's bushy crest allegedly reminded Brisson of a broom, whereas, somewhat curiously, its crest and beak supposedly reminded Gmelin of a small sunshade! Having said that, it has also been suggested that umbretta derives from 'umber', which is another name for the earth-brown shade of this bird's plumage.

Any mystery regarding the hammerhead's name, however, pales into insignificance compared to that which still surrounds its precise relationship to other birds. Just like the shoebill, it embodies an ambiguous assemblage of characters that at the same time link it to and separate it from both the heron family and the stork family. 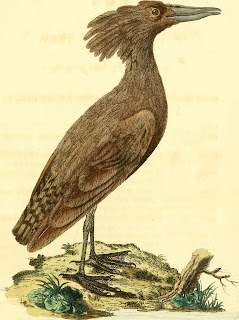 Dating from 1776, this is a very early colour illustration of the hammerhead (public domain)

The hammerhead's heron-like attributes include the incomplete encircling of its bronchi (air tubes) with cartilage - the gaps are sealed with membrane; the pectinate (comb-like) shape of its middle toe's claw; and its rear toe's alignment at the same level as its forward-pointing ones. Yet its lack of powder-downs suggests an affinity with storks, as does the extension of its neck in flight. Electrophoretic examination of its egg-white proteins by Sibley and Ahlquist in 1972 also revealed a correspondence with storks.

Conversely, the hammerhead's general behaviour is neither heron-like nor stork-like. And its parasitic lice (useful indicators of evolutionary affinity between species, as closely related host species often have closely related parasites) are most similar to those of plovers, which belong to an entirely different avian order – Charadriiformes, the wading birds. In the past, some workers had suggested that its nearest relative was the shoebill, but as the latter bird's own classification was still in a state of taxonomic flux, this was not particularly illuminating! 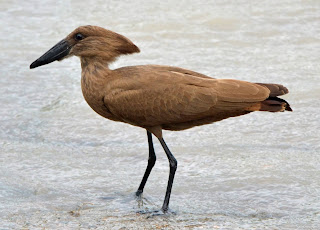 It might be wading here in the physical sense, but the hammerhead is not a wading bird in the taxonomic sense (Voidoffrogs/Wikipedia – copyright free)

Most recently, however, based upon the findings of extensive genetic studies, both the hammerhead's family and that of the shoebill (as well as that of the herons) have been removed entirely from the stork order, Ciconiiformes, and rehoused within the pelican order, Pelecaniformes instead. Consequently, this allies them more closely with the pelicans and the herons than with the storks.

For many years, the hammerhead's fossil ancestry was unknown. In 1984, however, Dr S.L. Olson documented an early Pliocene representative, named Scopus xenopus, from Langebaanweg, in South Africa's Cape Province. 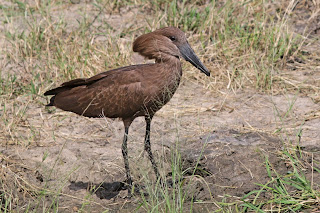 The hammerhead may look like a small heron, but its closest relatives are actually the pelicans and the shoebill (© Charles J. Sharp/Wikipedia – CC BY SA 4.0 licence)

The hammerhead is famous behaviourally for boisterously cavorting in wild, highly vocal display dances when associating in small flocks during the breeding season, which varies from one locality to another. Otherwise it is a rather silent, unassuming bird, patrolling the shallow waters of ponds in search of fishes, amphibians (especially the clawed toad Xenopus), water insects, and the occasional snail or worm, which it hunts by disturbing the mud at the bottom of the pond with its partially-webbed feet or its slightly-hooked beak.

Curiously, the hammerhead has inspired many strange superstitions and legends. For example, in certain parts of its range it is referred to as the lightning bird, because the local tribes attribute it with the magical power to invoke terrifying storms at will, and they are also convinced that it can command floods and control the rain. The Kalahari bushmen believe that if anyone tries to rob its nest they will be struck by lightning, and that killing this bird will displease the evil deity Khauna. Another of its titles is 'the King of Birds', because the natives widely believe that other birds help it to build its nest, by bringing it offerings of twigs and leaves. 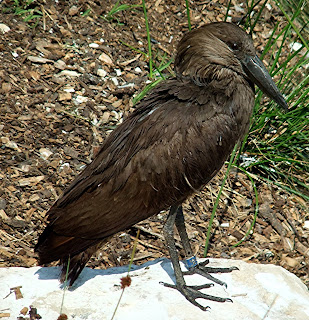 Small, dark, and sinister is how the hammerhead is unfairly portrayed in many native myths and superstitions (© Dr Karl Shuker)

This odd idea probably stemmed from the enormous size of the hammerhead's nest - which measures up to 4.5 ft in breadth and 6 ft in height, weighs as much as 200 lb, is composed of up to 10,000 sticks, and is sufficiently capacious to house a fully-grown human. It does seem hard to believe at first that this immense edifice could be constructed by two such modest-sized birds as a pair of hammerheads, and yet there is no scientific evidence at all to support the claim that they receive assistance from other species. Ironically, the exact reverse is true.

As disclosed in a superb Anglia TV documentary film entitled The Legend of the Lightning Bird (first screened in Britain on 20 April 1984), other birds frequently take pieces away from the hammerhead's nest, to use in their own! Nevertheless, such blatant theft clearly does not dissuade this species from nest-building – on the contrary, and whether breeding or not, hammerheads construct 3-5 of these huge nests per year. 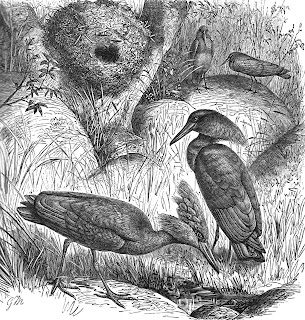 Another local belief, vehemently affirmed by the Xhosa, a Bantu people from South Africa, is that this prodigious nest is divided internally into three distinct 'rooms' - a bedroom for hatching purposes, a dining room for feeding and food storage, and a general hallway. This was also seriously subscribed to by many renowned scientists at one time, including Dr Richard Lydekker (in The Royal Natural History, 1894-6). Yet although observations have since confirmed that there are various partitions and ledges inside the nest, there is no evidence for the existence of discrete rooms. Equally, there is no proof that the hammerheads store food inside the nest.

Its nests are so huge that several other animal species often make their homes inside too, including monitor lizards and large snakes, which probably explains folkloric belief in this bird as a shape-shifter. After all, if a hammerhead is seen entering the nest and a big lizard or snake is then seen coming out of it, non-scientific observers steeped in traditional rumour and superstition can be forgiven for drawing an ostensibly evident yet totally erroneous conclusion. Another, more amusing piece of folklore related to its nest is that whenever anyone living in hammerhead territory has their hair cut, they must take great care to collect every last snippet afterwards, because if the hammerhead finds even the smallest tuft and decorates its nest with it, the hair's former owner will assuredly go bald! 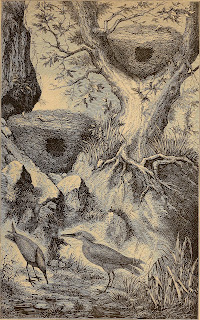 This distinctive species also has a widespread reputation among native tribes as a harbinger of doom, presumably because of its somewhat sinister appearance when poised motionless at the side of a pool - a dark, sombre silhouette, with its unique hammerheaded outline. And when staring fixedly into the water in this manner, it is said to be gaining visions of the future. Amazingly, it is a bird of such ill omen that many locals will desert their homes or villages if a hammerhead should as much as fly overhead, as they fear that death will otherwise occur there!

Similarly, should one of these birds be heard calling during the evening, and especially if it calls three times in succession, someone will supposedly die during the night. And in Madagascar, natives believe that anyone who destroys its nest will contract leprosy. Moreover, if a hammerhead should fly towards white-water rafts on the Zambezi, the rafting guides will frantically wave their arms, scream, and shout as loudly as possible in order to scare it away, because they firmly believe that bad luck will ensue if it should fly over the rafts. 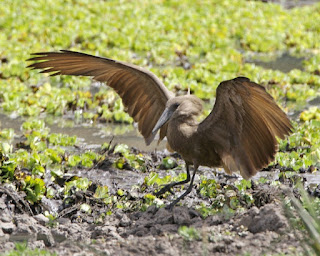 Such notoriety is totally undeserved, as the hammerhead is a thoroughly harmless, inoffensive species – normally. However, Nos. 124 and 126 of the Witwatersrand Bird Club News contain reports of hammerheads aggressively seeing off various birds of prey! Nevertheless, it is no bad thing for it to be burdened with such a bad reputation, for it actually operates in the bird's favour. This is because natives consider it highly unlucky to hurt or kill a hammerhead, so the species enjoys a protected existence, exempt from the depredations of humankind.

This ShukerNature blog article is adapted and updated from my book The Menagerie of Marvels. 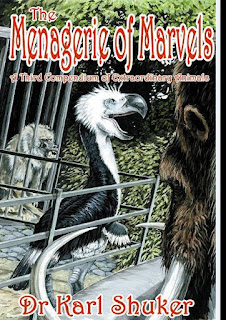