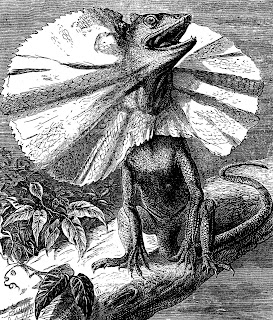 On Friday, I posted this picture of an Australian frilled lizard and wrote that the frill is used in territorial and sexual displays and is supported by long spines of cartilage. When the lizard is frightened, it gapes its mouth, showing a bright pink or yellow lining, and the frill flares out, displaying bright orange and red scales. The frill may also aid in thermoregulation.

But I also asked: What other use, allegedly, is the frill used for?

Here is an excerpt from my book Extraordinary Animals Revisited (CFZ Press: Bideford, 2008):

"Not long after the publication of this book’s original edition [Extraordinary Animals Worldwide, 1991], I learnt of an additional, equally controversial glider – none other than Australia’s famous frilled lizard Chlamydosaurus kingii. [...] It is renowned for the extraordinary crenated frill around its head and neck, which it expands if threatened, in order to startle and ward off any would-be attacker. However, some writers contend that it also utilizes its frill for volplaning, enabling it to glide from tree to tree.

"...a pair lived outside our garden fence for years. They would run up a tree if one approached, and I’ve often seen my husband put his hand round the tree (they always climb up the opposite side to where you are) and catch one’s tail; he would then hold it and go round and stroke the lizard’s back and frill. If really alarmed when up a tree they extend their gaily-coloured frill and glide down to the root of another tree.

"Sadly, Black gave no description of the volpaning itself. I can only assume that if it does occur, the frill must act like a parachute, opening out, thence enabling the lizard to drift passively downwards.

"I believe that Mrs Black and other observers have produced convincing evidence that we have an Australian “flying lizard”. It is to be hoped that some zoologist will take steps to observe these volplane flights of Chlamydosaurus.

"Unfortunately, this does not seem to have happened, so for now, this intriguing subject is very much up in the air. Whether the same can be said of the frilled lizard itself, therefore, remains to be seen - literally!"
http://www.amazon.co.uk/Extraordinary-Animals-Revisited-Janet-Bord/dp/1905723172/ref=sr_1_2?ie=UTF8&s=books&qid=1235683729&sr=8-2
Posted by CFZ: Cryptozoology Online at 21:23