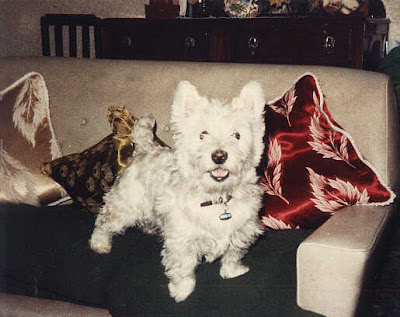 Much as I like cryptozoology, my interests in animal mysteries and anomalies are not entirely limited to that field, as many of you know - which is why my blog is entitled ShukerNature, rather than ShukerCrypto or suchlike. So here, just for a change, is a departure into animal symbolism and mysticism.

DOG DREAMING: UNMASKING THE HOUNDS OF MORPHEUS.
Bearing in mind that the dog was first domesticated by humanity around 9500 years ago and has famously become 'man's best friend' in the animal world, it is hardly surprising that our dreams should often contain canine incursions - or, as a scholar of classical Greek mythology may prefer to dub them, the hounds of Morpheus. But do these visitations have any symbolic significance? Could they comprise subconscious messages - even warnings, perhaps?

As will be seen, according to the traditional lore and legends associated with dream divining, the answers to such questions depend upon a variety of different factors. These include the identity of the owner of the dog featured in your dream, the dog's behaviour towards you, its activities, and even its specific breed or morphological appearance.

WHOSE DOG ARE YOU?

Symbolically, the dog personifies loyalty, faithfulness, friendship, and affection. Generally speaking, these traits are also personified by a dog encountered by you in a dream - provided that, in your dream, you are the dog's owner. If your dream dog is in good health, this is supposedly a reflection of your finances' healthy outlook. Similarly, if it should play with you in an affectionate manner, this indicates an impending improvement in your fortunes, and success with any romantic liaison that you may enter into in the near future.

Indeed, so potent is the benevolence represented by a dream dog owned by you that even if it should disturb you by barking or snarling at you, this simply means that you will achieve success against scheming, treacherous false friends. That, at least, was the opinion of Thomas Tryon, a celebrated 17th Century dream diviner from Bilbury, Gloucestershire, and author of A Treatise of Dreams and Visions... (1695). Tryon also claimed that if your dream dog tears your clothes, this should be taken as a warning that one of your enemies is saying bad things about you or even threatening your job.

If the dog in your dream is owned by someone else (particularly a stranger), however, it supposedly represents a profound enemy, and should be treated with great care.

Paying close attention to the activities of a dream dog provides important clues to the nature of the message conveyed by its visitation, at least according to the lore of dream-divining.

For example, a dog seen swimming implies that good fortune and happiness lie easily within your grasp; and your future undertakings will surely be successful if you dream of taking a journey alone but with a dog following closely behind you. Equally, if you should be approached in a dream by a friendly dog, especially a white one, success in your romantic or business life will soon come to you. Conversely, if a black dog should approach you, beware - this is not a good omen. Indeed, this interpretation probably stems from the age-old legends of phantom Black Dogs, whose appearances often presage disaster or death. Similarly, dreaming of a howling dog is said to be unlucky - no doubt derived from primitive, fanciful superstitions offering equally woeful claims regarding dogs baying mournfully at the moon.

Dreaming of dogs engaged in hunting other animals, such as foxes, allegedly prophecies an unexpected increase in the speed of your future undertakings. And a dream featuring a dog killing a snake is said to symbolise good luck (for you, if not for the snake!). But if you should be bitten by a dog in your dream, then you will suffer a loss - or, at the very least, be deceived by your loved one. So make sure that you don't tease a dream dog!

According to the early dream interpreters, different breeds, sizes, and types of dream dog had very different meanings - most of them notably moralistic.

For instance, a pursuing bloodhound should be taken as a warning that you are about to face a great temptation, which, if succumbed to, could cause great problems for you. Moreover, if you should be startled by the sudden appearance of a sizeable mastiff, this symbolises a considerable inconvenience that you will experience if attempting to better yourself in the future. Nor should you feel comforted by a seemingly innocuous, pleasing dream featuring one or more fancy pet dogs, because such a dream would expose you as a vain, selfish exhibitionist, overly fond of ostentation. And dreaming of small dogs is supposedly a reflection of inherent small-mindedness and frivolity! Chihuahuas, take note!

Not surprisingly, the appearance of a mad, rabid dog in a dream traditionally represents a failure to succeed (as does an unkempt or emaciated dog), and even the impending onset of some dire illness. But who would have guessed that a many-headed Cerberus-lookalike personifies your frustrated attempts to achieve too many goals at once?

A WOLF IN DREAM'S CLOTHING?

As a rule, the domestic dog's wild relations do not fare very well at the hands of the dream diviner. Should you ever dream of encountering a wolf, for instance, this dream is reputedly warning you that one of your business associates not only is a thief, but also is someone who cannot be trusted with secrets, as he or she will betray you if the opportunity presents itself. If you dream of hearing a wolf howl, this indicates that there is a secret alliance of rivals seeking to overcome you, albeit honestly, in future business deals.

As may be anticipated, dream foxes epitomise slyness, but also envy and betrayal by your working associates. And if you chase a fox in your dream, this is traditionally interpreted as a prediction that you are about to pursue a risky professional or romantic course of action. Even a tame, friendly fox should not be trusted in a dream, or so they say.

So when you next dream about a dog, remember that it may portend some highly significant event in your future. Alternatively, of course, it may simply mean that you like dogs!
Posted by CFZ: Cryptozoology Online at 01:15