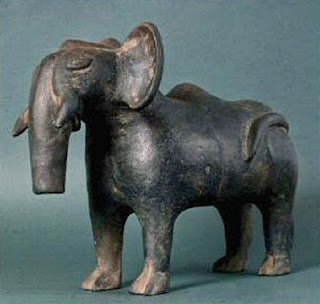 Side-view photograph of the enigmatic Tiahuanaco elephant figurine (reproduced here on a strictly non-commercial Free Use basis only; copyright holder currently unknown to me, despite considerable efforts made to trace details)

They do say that all good things come in threes. So, in the hope that you found interesting the two previous hitherto-uninvestigated examples of putative cryptozoological artefacts that I documented recently on ShukerNature (click here and here), there now follows a third one – and this time hailing not from Africa but instead from South America.

Over the years, there have been several well-publicised and often-republished accounts of mysterious creatures allegedly sighted in various parts of the New World that supposedly resembled the American mastodont Mammut americanum. This was a very large, long-headed, long-tusked relative of modern-day elephants, but it officially became extinct around 11,000 years ago. 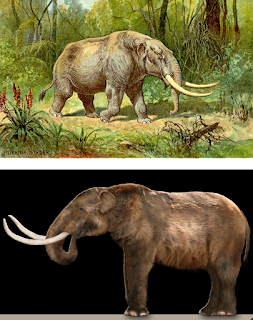 None of these particular reports, however, have withstood close cryptozoological scrutiny. But also on file are a number of less familiar ones that may conceivably indicate – or not – the late survival of mastodonts, or something quite like them. Of these latter reports, there is one in particular that especially fascinates me, featuring as it does an artefact that is very elegant but also very enigmatic – on account of how little I have been able to discover concerning it. Consequently, I am presenting herewith my investigation and findings concerning it, in the fervent hope that bringing this remarkable item's very intriguing if decidedly abstruse history to wider attention will assist in eliciting additional information.

The artefact in question is a small black-ware pottery figurine of an instantly-recognisable elephant, complete with a pair of large round flaring ears, four sturdy legs, a downward-curving trunk, and a pair of short tusks. Yet it was unearthed at Tiahuanaco (aka Tiwanaku), a pre-Columbian archaeological site near Lake Titicaca in western Bolivia, South America, where all manner of items have been found that originate from the once-mighty Tiahuanacan empire, which had existed there from 300 AD to 1,000 AD. 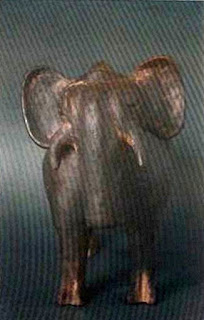 Front-view photograph of the enigmatic Tiahuanaco elephant figurine (reproduced here on a strictly non-commercial Free Use basis only; copyright holder currently unknown to me, despite considerable efforts made to trace details)

I first learnt of this figurine from an online Russian forum called Laiforum, one of whose members (with the user name Mehanoid) had posted there on 15 April 2016 an excellent side-view photograph of it with a link to a Russian video on YouTube. When I accessed this video (currently still online - click here to view it), I discovered that it had been uploaded on 7 April 2016 by an association called ProtoHistory, and was a filmed lecture given by Russian historian Andrey Zhukov to publicise his new book, Secrets of Ancient America (2016).

Just a few seconds after the first 27 minutes of the video have played, two photos of the elephant figurine are briefly screened. One is the side-view picture posted on Laiforum, the other is a front-view shot. Moreover, the side-view picture is then re-screened but this time revealing that it is actually part of a page from what appears to be an article dealing with it, written in Spanish. Using a screen-shot of this, I have been able to confirm that it is one of at least two pages written in Spanish and illustrated with several other animal-themed Tiahuanacan black-ware pottery figurines. 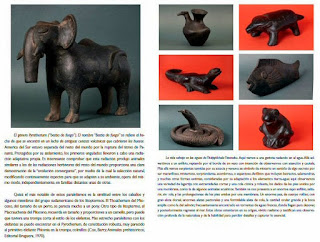 Screenshot of the two above-noted pages from the unsourced Spanish article (reproduced here on a strictly non-commercial Free Use basis only; copyright holder currently unknown to me, despite considerable efforts made to trace details)

However, I have not succeeded so far in obtaining any additional details concerning the article itself – no author name, article title, periodical title, or date of publication. Nevertheless, the text present just on these two pages is nothing if not intriguing, because of the very unusual identity that is being considered there in relation to the Tiahuanaco elephant figurine.

Prior to its connection to North America when the isthmus of Panama was formed around 3 million years ago, South America had been an island continent for millions of years, just like Australia. And, again just like Australia, during that vast time period its mammalian contingent had given rise to several entirely new, unique lineages, especially among its ungulates. But due to convergent evolution, outwardly they came to look very like the respective ungulates elsewhere in the world whose ecological niches they were occupying in South America. Chief among these Neotropical impersonators were the horse-like and camel-like litopterns, plus the ox-like and hippopotamus-like notoungulates.

Less familiar but no less distinctive, however, were the pyrotheres ('fire beasts', so-named because the first documented fossil specimens had been excavated from an ancient volcanic ashfall). In their most famous representative, Pyrotherium romeroi of Argentina, the nasal trunk, long head, general body shape, and overall size (up to 10 ft long and standing 5 ft at the shoulder) rendered it more than a little like a mastodont, or even a very big tapir - both groups, incidentally, actually occurring first in North America, not reaching South America prior to the isthmus of Panama, thus enabling pyrotheres to occupy their niches here. 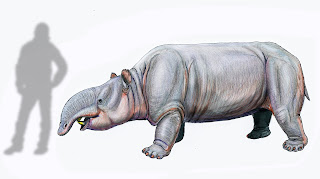 Moreover, certain reconstructions of their likely appearance in life have given various large pyrotheres a somewhat pachydermesque form, complete with large ears, sizeable tusks, and a fairy long trunk. Could it be, therefore, as speculated in the Spanish article containing its two photos, that the Tiahuanaco elephant figurine was actually not an elephant at all but instead a late-surviving pyrothere?

Unfortunately, whereas certain litopterns and notoungulates are indeed known from documented fossil remains to have survived to at least as recently as the Pleistocene's close just over 11,000 years ago, the youngest pyrothere fossils currently on record are over 20 million years old, dating back to the Oligocene. Moreover, even the most proboscidean-inspired pyrothere restorations are still far less elephant-like and much more mastodont-like than the Tiahuanacan figurine, so it seems prudent to assume that the latter does indeed represent an elephant rather than a pyrothere. 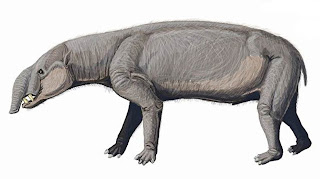 Worth noting here, incidentally, is that South America was once home to yet another taxonomic group of vaguely proboscidean ungulates – the astrapotheres ('lightning beasts'), which ultimately died out around 12 million years ago during the mid-Miocene epoch.

Their most famous representative was Astrapotherium, which was slightly smaller than the pyrothere Pyrotherium, but, as with the latter beast, may have looked somewhat mastodont-like or even tapir-reminiscent in life, courtesy of its elongated head, nasal trunk, and tusks (very long in certain other astrapotheres, particularly Colombia's snorkel-trunked, short-legged, long-bodied Granastropotherium snorki). However, its ears were only small, and it certainly would not have resembled the mystifying Tiahuanaco elephant figurine. 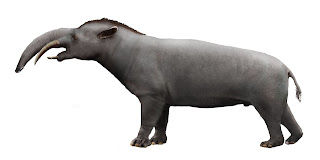 Of course, assuming that the latter figurine is indeed a depiction of a true elephant (and it certainly looks like one, albeit a somewhat short-trunked individual), as opposed to a pyrothere, astropothere, or mastodont, the inevitable question requiring an answer is how can its origin at Tiahuanaco be explained?

Might it simply be a recently-created fake, therefore, as has already been postulated by many authors with regard to the depictions of comparably out-of-place and/or anachronistic animals depicted upon the highly controversial Ica stones of Peru and via the equally contentious Acámbaro figurines of Mexico? Or could its existence constitute evidence of pre-Columbian trading and visitations by Libyans and other travellers from the Old World, as has been repeatedly proposed down through the years by a number of researchers and chroniclers?

Clearly, the very perplexing Tiahuanaco elephant figurine deserves a detailed study, and I would be very grateful to any readers who can offer me further information concerning it, including its current whereabouts plus the name and date of the periodical in which the Spanish article discussing it appeared.

This ShukerNature blog article is excerpted from my newly-published mega-book Still In Search Of Prehistoric Survivors. 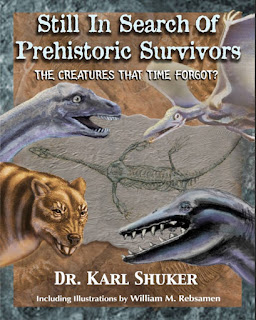