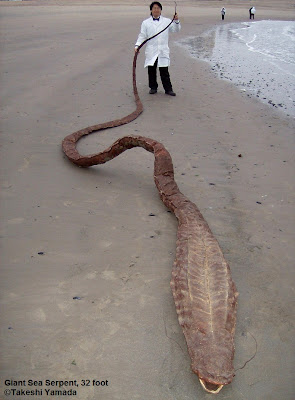 For any self-respecting cryptozoologist, rogue taxidermy is very much like cream cakes – naughty, but nice! I know that I’ve never been able to resist viewing and reading about all manner of fabricated fauna, from Feejee mermaids and Jenny Hanivers to jackalopes, pygmy bison, vegetable lambs, the bizarre exhibits of Charles Waterton, and much much more.

Consequently, it was only ever likely to be just a matter of time before I became acquainted with the spectacular zoological creations of multi-award-winning Japanese-born artist, author, and educator Takeshi Yamada (click here here for a detailed biography), now living in Brooklyn, New York City. Below is a summary of his highly successful career, as reported fully here by the Brooklyn Public Library:

"Artist, educator and author Takeshi Yamada has won numerous prestigious awards and honors such as the "International Man of the Year," "Outstanding Artists and Designers of the 20th Century," "2000 Outstanding Intellectuals of the 21st Century," "Who's Who in America" and "Who's Who in the World". In addition, the mayors of New Orleans, Louisiana and Gary, Indiana have awarded him the "Key to the City". Yamada, as a visual anthropologist, has had over 350 fine art exhibitions including 36 solo shows internationally in Spain, the Netherlands, Japan and the United States. Yamada has also published 21 books. His artwork has been chosen for inclusion in the collections of numerous museums and corporations internationally."

Over the years, Yamada has very skilfully produced all manner of fantastic creatures that never were but should have been - from the magnificent sea serpent pictured at the beginning of this blog, many-finned mer-folk, human-headed ants, and vampire monkeys, to the chupacabra snail, the whip-tailed tree octopus, flesh-eating fungi, and even a Mongolian death worm (or two). 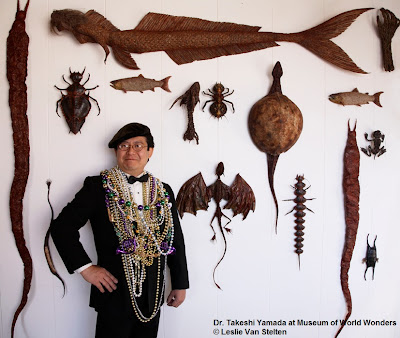 Takeshi Yamada alongside some of his creations

Moreover, these are only a few of his astounding collection of self-manufactured marvels that can be viewed in Yamada’s Museum of World Wonders on Brooklyn’s Coney Island, and also in his various ‘Cabinet of Curiosities’ exhibitions that have been touring the USA since 1983. One of these is currently being staged at the Coney Island branch of the Brooklyn Public Library (see note at the end of this ShukerNature post). 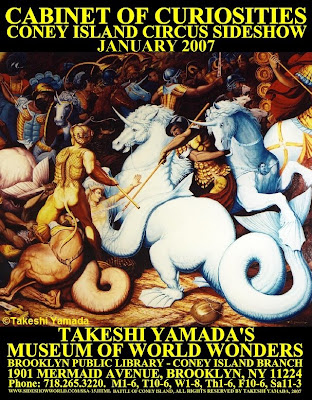 Advertising poster for one of Dr Yamada’s touring exhibitions

You want more? Here’s a quote from an article by Silke Tudor published in the 7 November 2006 issue of New York City’s Village Life weekly magazine concerning Yamada and his multifarious menagerie:

“Born out of the mythos of Coney Island, Yamada's present-day cosmos includes several six-foot-long Mongolian death worms; a pair of Fiji mermaids; a two-headed baby; a hairy trout; a seven-fingered hand; fossilized fairies; jackalope stew; a five-foot-long bloodsucking chupacabra; a 16th-century homunculus; a legion of samurai warriors trapped in the bodies of horseshoe crabs; a tiny marsh dragon; a coven of freakishly large, nuclear-radiated stag beetles from Bikini Atoll; and a furry mer-bunny, all of which are brought to life using old bones, shells, resin, origami, and bits and pieces of refuse, both inorganic and fleshy.”

Irrespective of their mundane constituents, however, these gaffs (the correct term for rogue taxiderm specimens) are astonishingly life-like.

So here, albeit as much for my delight as yours, is an all-too-brief selection of specimens from the truly extraordinary world of Takeshi Yamada (together with his own supremely-entertaining and meticulously-compiled – albeit entirely fictitious! - publicity details for each specimen, where available).

NB - Utilising the Fair Dealing/Fair Use convention, all of the following photographs are presented here in the context of review and on an entirely non-commercial basis; the copyright of all of them (unless otherwise stated) is owned by Takeshi Yamada. 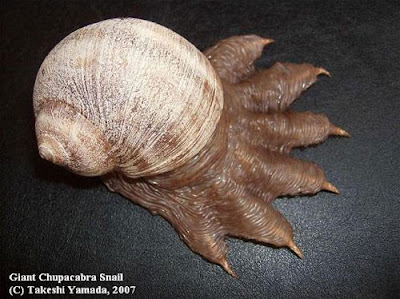 The chupacabra snail – a deepsea species discovered as recently as 2007, and named by Yamada after its alleged resemblance to the clawed foot of the mysterious chupacabra 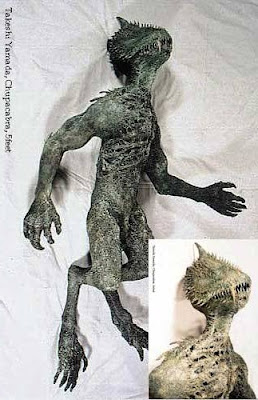 ...And here is the chupacabra, or at least the preserved 5-ft-tall corpse of one! 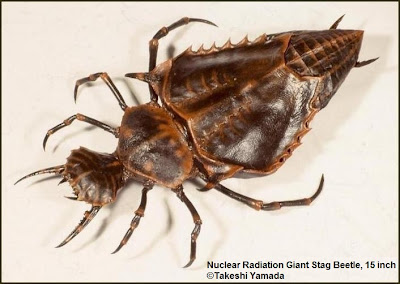 Bikini Atoll stag beetle, enlarged and mutated by nuclear radiation into what Yamada describes as: “One of the largest and most vicious carnivorous land arthropod species in the world”. The female grows up to 17 in long, and both sexes are not only very poisonous but also extremely radioactive. In reality, this specimen has been cleverly constructed in part from portions of the horseshoe crab Limulus. 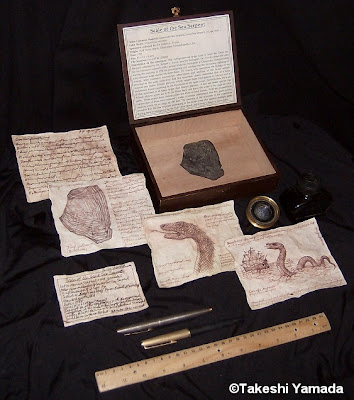 A scale from the great sea serpent itself! And according to Yamada, this particular sea serpent really is a giant marine snake. Here’s an excerpt from his detailed description of the scale: “This well-preserved large scale is from the Great Sea Serpent collected by Dr. Robert L. Travis (marine biologist). Dr. Travis visited the area for his extensive research with a group of marine biologists in Gloucester, Massachusetts during the summer of 1790 for investigating and cataloguing the increasing sightings of a mysterious large marine life form there. Dr. Travis, who specializes [in] the biology of sea snakes, after extensive microscopic observation and analysis of the tissue sample attached to the scale confirmed that this specimen closely resembled that of a large tropical sea snake, Pelamis platurus [a genuine species, the yellow-bellied sea snake], which ranges from Madagascar to Mexico and is sometimes found swarming by the thousands in the open ocean. Nevertheless, the scale of this specimen is 60 times larger than Pelamis platurus.” 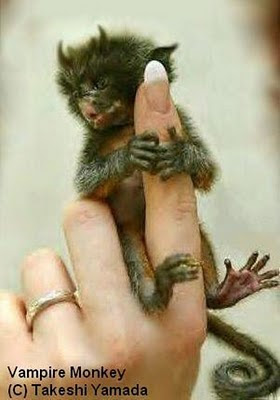 A Chinese vampire monkey Desmosndulus rotundidus, one of three closely-related but very rare species of sanguinivorous simian, all of which are nocturnal and seek their prey using specialised infrared sensors on their nose that detect body heat, thereby enabling them to seek out warm-blooded victims even in total darkness. It is possible that Yamada’s inspiration for this creation was the jenglot – a very small, vampiric humanoid entity in Indonesian mythology, which, if one is captured, is sustained by being fed the blood of its keeper or that of goats. 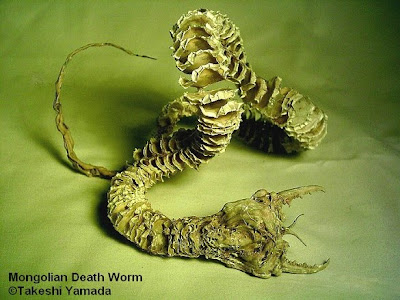 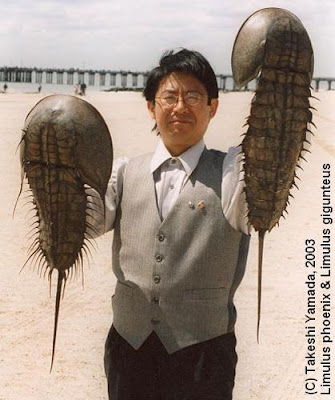 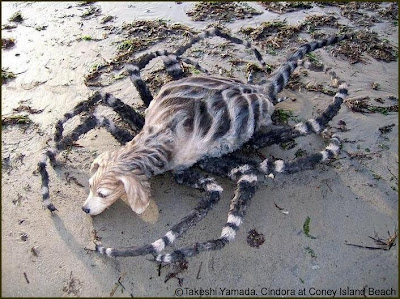 Cindora, the eight-legged spider dog, now in the collection of the Lucky Devil Thrillshow - a bona fide circus sideshow that travels throughout the USA. 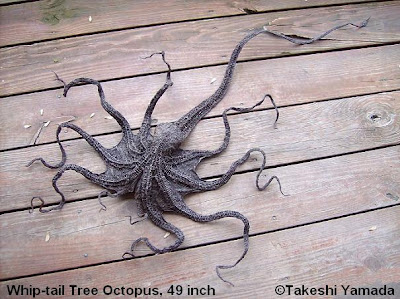 The whip-tailed tree octopus. According to Yamada: “It is the largest species of tree octopus indigenous to Snake Island. This specimen is a 49-inch adult female. [The] tree octopus is an extremely rare terrestrial octopus with modified gills (similar to the lungfish and frog) and thick, dry skin for terrestrial life [in] wetland and rainforest. Unlike the common eight-legged sea dwelling octopus, all the tree octopus[es] have ten legs (just like the common squid and cuttlefish). 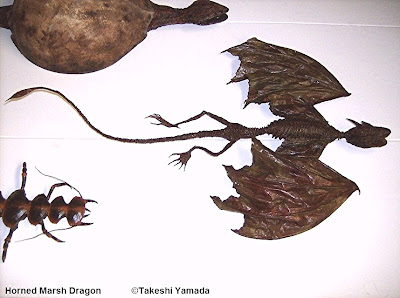 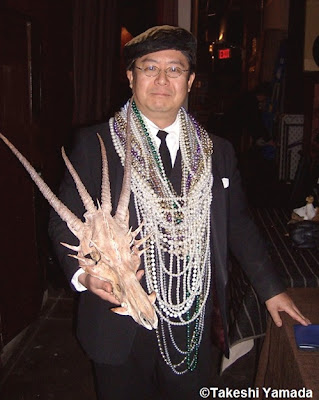 And Takeshi Yamada with the skull of a horned dragon... 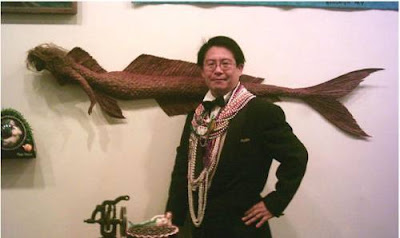 And now standing alongside a mummified 6-ft-long multi-finned mermaid from the Japanese island of Shikoku. 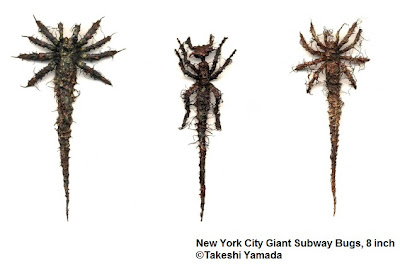 Three species of New York City giant subway bug, for which Yamada has compiled such an extensive zoological account that if you wish to read it all, please click here. 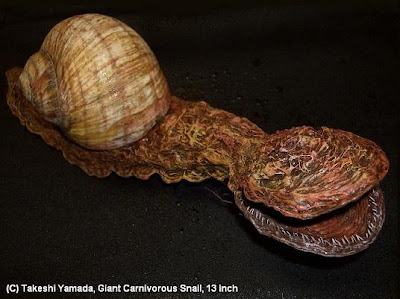 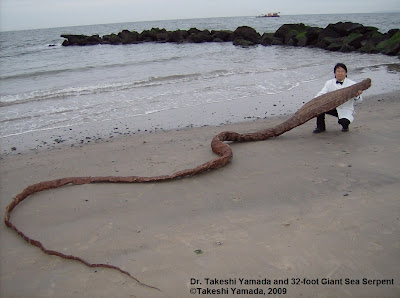 And finally, another photo of the 32-ft-long giant sea serpent pictured at the beginning of this ShukerNature post.

And if you want to see some of Yamada’s monstrously delightful creations in the flesh (or papier-mâché, depending upon the specimen in question), an eye-popping selection has been on display in the lobby of New York City’s Coney Island Library since 1 October 2006. Moreover, this long-running exhibition’s contents change each month. But you’ll need to hurry – it is due to end on 31 December of this year.