THE TRANSFORMATION OF SAINT EUSTACIUS 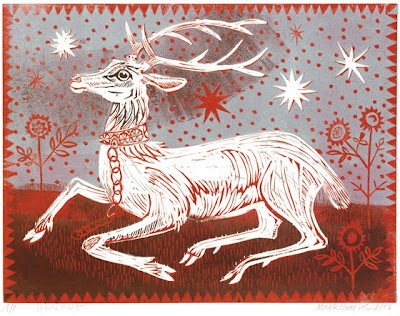 'White Hart' - Mike Hearld
Certain religious stories, such as St George and the Dragon, have generated very considerable interest down through the centuries and have become extremely well known, but there are others that have attracted much less notice, yet are no less memorable. The following story is one of these hitherto-neglected Christian legends, which has always stayed in my mind ever since I first read it many years ago, so I finally decided to retell it in verse.

THE TRANSFORMATION OF SAINT EUSTACIUS

Through the emerald forests
Of golden-hued Dawn,
Rode Eustacius, a soldier
Of Rome, one fine morn,
As his hounds bayed all round him
With dark, fearful eyes,
Like a torrent of shadows
‘Neath newly-born skies.

So the soldier rode onward
Through golden-leaved trees,
While the hounds’ dismal howling
Still hung on the breeze
Like a dream half-forgotten
‘Twixt Future and Past –
Yet still doomed by its maker
Forever to last.

Then ahead of Eustacius
A white stag appeared,
And the soldier’s steed trembled,
Then, shivering, reared.
Just as if the stag’s presence
Imbued it with awe,
As the hunter peered onwards
And then, the deer, saw.

All at once, the stag stiffened,
Then fled through the trees,
But Eustacius pursued it,
Through clearings and lees.
On he chased this white wonder,
Past mountains and vales,
And the morn became noontide
In forests and dales.

Later, Evening drew gently
The curtains of Night
Far across the blue heavens,
Now dappled with light
From the glistening stars set
In countless array,
Each a tiny eye peering
Through blankets of grey.

And as they witnessed softly
The hunt far below,
E’en the moon wept in sadness,
And shrouded its glow
To give cover of darkness
‘Midst shadowy glades
To the hunted stag, weary
As still the hounds bayed.

But the stag was now tiring,
Its head dangled low,
As its heart heaved and pounded,
Its eyes full of woe,
Till it sank down exhausted
On carpets of dew,
As the hounds’ ghastly howling
More terrible grew.

Then Eustacius perceived it,
Stretched outwards to die,
As its fragile heart throbbed ‘neath
The sorrowful sky.
And the stag watched the soldier
With eyes dark and mild,
For it made no swift movement,
Yet cried like a child.

Then a pale shaft of moonlight
Fell softly from Space,
And its shimmering beauty
Lit up the deer’s face.
And as all the world waited,
The stag raised its head.
Its mouth opened, and then, with
A human voice, said:

“Why dost thou still pursueth
Me long through the trees?
I am Christ,” as Eustacius
Dropped low to his knees.
For the stag was surrounded
By radiant light,
Like a star incandescent
That passed from all sight

To the heavens resplendent
In Glory Divine.
Then Eustacius looked up, and
Drew slowly the Sign
Of the Cross there before him –
A new saint was born,
In the reincarnation
Of God’s golden Dawn.

This poem is just one of more than a hundred that are contained within Star Steeds and Other Dreams - my first volume of poetry, published by the CFZ Press in 2009.
Posted by Dr Karl Shuker at 19:22