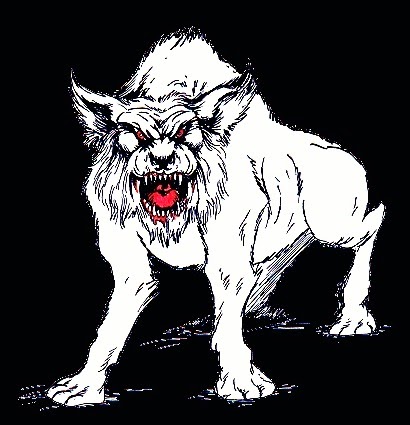 A fairy hound, one of the Cwn Annwn - the hounds of Annwn, the Celtic Otherworld (© Simon Wyatt)

Characterised by their sable-hued pelage, blazing red eyes, spectral nature, and their traditional association with disaster and death, the zooform phenomena known as Black Dogs have been extensively documented. Equally mysterious, but far less familiar, are their pallid counterparts, the White Dogs and fairy hounds. Nevertheless, these canine phantoms are by no means rare.

One of Great Britain's most famous White Dogs is Gally-trot, reported in the North Country and Suffolk, which resembles a bullock-sized dog with a white shaggy coat. Gally-trot earns its name from its tendency to chase after anyone who runs away from it, and from its fearsome demeanour ('Gally' translates as 'to frighten'). What may be the same apparition has also been recorded specifically from a marshy pool near Burgh, in Suffolk, called Bath Slough.

During the years leading up to World War II, a White Dog was often seen racing across the road linking the Norfolk villages of Great and Little Snoring, and on one occasion an unsuspecting motorist drove directly through it! Equally intangible is the white hound of Cator Common, Dartmoor, which, in one particularly memorable modern-day instance, abruptly disappeared in full view of a lady who had stretched out her hand to stroke it. 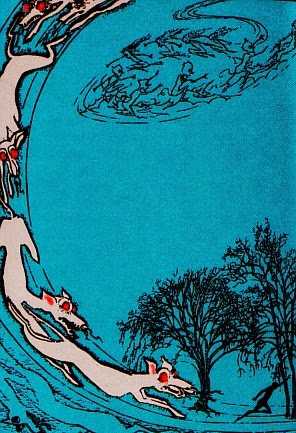 A pack of White Dogs

Even more extraordinary, as brought to my notice by cryptozoologist Jan Williams, is the White Dog reported from Leek Brook in Staffordshire. Just like its Black Dog equivalent, East Anglia's Old Shuck, this particular White Dog has no head! Another Black Dog trait mirrored by certain White Dogs is their association with chains - as demonstrated by the white hound of Bunbury, Cheshire, which is normally observed dragging a length of chain behind it.

A few Black Dogs have actually materialised inside churches, and there is at least one White Dog on file with a similar claim to fame. Resembling a ghostly white hound, this preternatural beast reputedly appears inside the church at Pluckley, Kent - not too surprising a locality, perhaps, as Pluckley is popularly deemed 'the most haunted village in England'.

Mystery beast investigator Neil Arnold has publicised a fascinating but hitherto little-known, present-day sighting of a White Dog. One evening during the early 1950s, a soldier based at an army camp inside Richmond Park was returning to the camp after visiting London when he noticed that the park's deer seemed unusually disturbed. Suddenly, several deer raced by him in a state of great panic, and when he looked behind them he was amazed to see a huge, pure-white hound, of hideous appearance with immense teeth, chasing after them. However, it was no normal, corporeal dog. Instead of running across the ground, this uncanny entity was racing through the air, at a height of about 1 ft above the ground!

Although most reports of White Dogs emanate from Great Britain, there are varied traditions elsewhere too. For instance: Lamper, the Hebridean death dog, is white, and runs round in circles to warn of an impending death. Werewolf lore has it that the loup-garou (French werewolf) can assume the guise of a White Dog. And in Romania, gypsies claim that many cemeteries here are occupied by white spirit wolves, which guard the living by discovering and destroying any vampires that may arise within these graveyards.

In his book Animal Ghosts (1913), veteran ghost investigator Elliott O'Donnell recalled how an acquaintance called Rappaport had encountered a pack of spectral hounds one winter's night on the slope of Russia's Ural Mountains. Headed towards a lake, Rappaport had been riding aboard a horse-drawn coach when a fierce pack of wolves had begun pursuing it. Despite his success in shooting some of them, however, Rappaport and the coach driver, Ivan, feared that they would soon be overwhelmed by the savage, snarling horde. Then, without any warning, the air was filled with a loud baying sound. Racing towards their coach was another canine pack. However, this one was composed not of wolves but of enormous white hounds. At the sight of these weird beasts, the wolves turned tail and fled:

"On came the hounds - more beautiful dogs I had never seen; as they swept by, more than one brushed against my knees, though I could feel nothing save intense cold. When they were about twenty yards ahead of us, they slowed down, and maintained that distance in front of us till we arrived on the shores of the lake. There they halted, and throwing back their heads, bayed as if in farewell, and suddenly vanished. We knew then that they were no earthly hounds, but spirit ones, sent by a merciful Providence to save us from a cruel death."

Lancashire's gabriel hounds are phantom dogs that race through the air, rather like the Richmond Park beast, and are sometimes said to be luminous white in colour, but are readily distinguished from 'normal' canine spectres (white or otherwise) by having human heads. 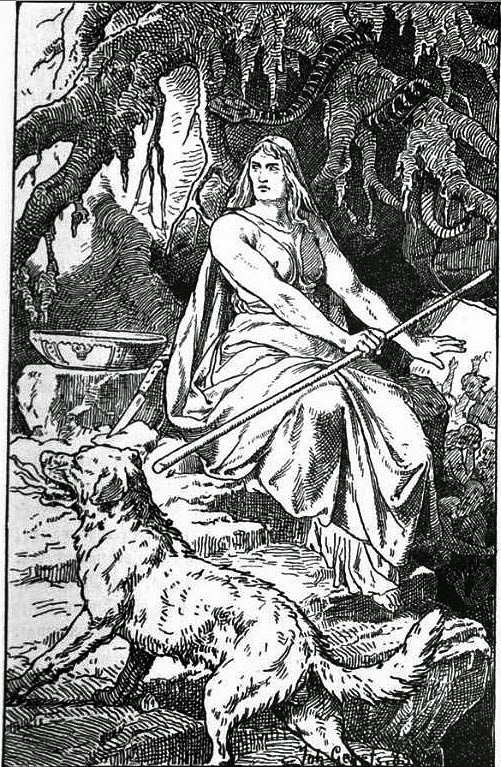 Another pack of ghostly White Dogs has been reported near Wellington in Somerset, whose open-mouthed members allegedly emit flame from between their jaws as they race along. This case has been investigated by renowned British folklorist Ruth L. Tongue, who has linked it to the longstanding British tradition of fairy hounds.

Also known as hounds of the hill, fairy hounds are said to be the hunting dogs of the Little People, who dwell in hollow hills. And according to Welsh mythology, a pack of these ethereal creatures, known as the Cwn Annwn, was also owned by Arawn, King of Annwn - the Celtic Otherworld. Resembling large white hounds with long slim legs, they are characterised by their ruby-red ears and eyes. 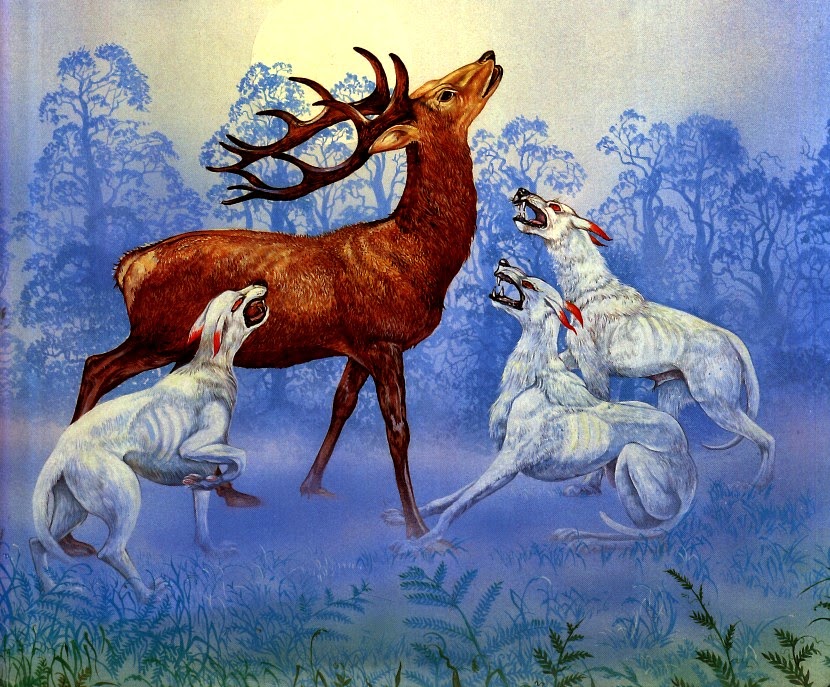 Researching Somerset fairy hounds, Ruth Tongue noted a modern sighting near Priddy. The eyewitness was a man who had seen two huge dogs, taller than Irish wolfhounds but with a rough white coat and red ears, walking by him, on the other side of the road, making no noise. According to local lore, he had been very lucky, because if they had walked by him on the same side of the road, or had uttered any sound, he would have surely died.

In her book Forgotten Folk-Tales of the English Counties (1970), Tongue included a story recalled in 1917 by a Mrs Foden of Long Mynd, and also known in Cheshire, with a similar variant in Irish folklore. It concerns a labourer's young assistant who was going home from work late one night when he saw a huge dog, larger than a calf, with a rough white coat and red ears, lying in some bushes. Thinking at first that it was a foot-sore foxhound, he collected some soothing dock leaves to wrap around its feet. After collecting them and calling the dog to him, however, he realised that it was "...one of the fairy hounds from the hill who bring death or ill-luck".

Although badly frightened, the boy boldly bandaged the animal's paws, then wished it good night before continuing his journey home. Nothing untoward happened to him, but one dark evening in November he was going back home along that same road when a huge demonic goat-like beast confronted him, with glowing green eyes. Transfixed with fear, the boy was certain that he would be killed - when suddenly a huge White Dog with red ears appeared from nowhere and ferociously attacked the goat-beast, enabling the boy to escape. Click here for my own detailed retelling of this folktale in an earlier ShukerNature post.

Of course, such tales as this could be dismissed as nothing more than charming but wholly fictitious folklore...except for the fact that such animals are still being reported today. Each year at sunrise on Midsummer Day, a ghostly priest reputedly enters West Kennet Long Barrow, a Neolithic tomb overlooking Silbury Hill in Wiltshire, and is followed by a spectral White Dog with red ears. A similar beast with fiery eyes is said to appear each evening at midnight in a Neolithic burial chamber called the Devil's Den, at Fyfield, also in Wiltshire.

Old traditions die hard, and those featuring White Dogs and fairy hounds are no exception. 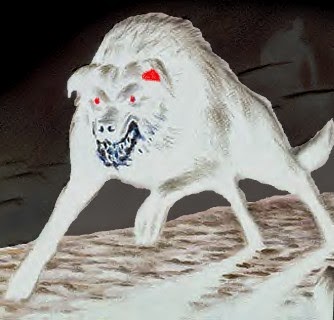