IS THE OZENKADNOOK TIGER A CARDBOARD CRYPTID? 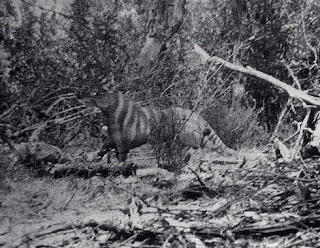 One of cryptozoology's most iconic images is the so-called Ozenkadnook Tiger Photograph, reproduced above. It depicts a large, seemingly dark-bodied, white-striped Australian mystery beast supposedly snapped in b/w during 1964 by Melbourne-based Rilla Martin while holidaying in Victoria. She had apparently been driving along a dirt track near Ozenkadnook when she saw the creature at the edge of some woods, and after stopping the car she managed to snap a single photo of it before it ran off.

In typical cryptozoological tradition, the photo's depiction of the beast is far from clear; but as its burly head looks vaguely dog-like, it has inspired various Aussie cryptid enthusiasts to speculate that the striped creature may be a living mainland thylacine Thylacinus cynocephalus. Yet this externally wolf-like marsupial officially died out here over 3,000 years ago, i.e. long before its official extinction on Tasmania in 1936. 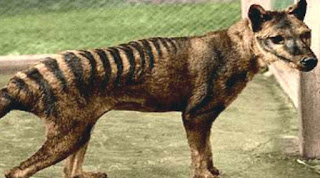 Moreover, the bizarre reverse-striping pattern exhibited by the photographed creature bears no resemblance to the thylacine's striping, and has led others to suggest that these markings are not genuine features of it at all, but merely constitute reflected sunlight.

Having said that, such a situation would not in itself automatically exclude the thylacine from consideration as an identity for this mystery beast, as succinctly demonstrated by the following very pertinent photograph: 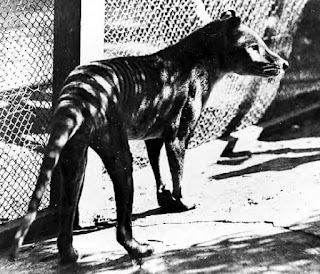 Less likely than a thylacine explanation, but suggested by some mystery beast fans, is that the Ozenkadnook tiger was a living marsupial lion Thylacoleo carnifex, which according to the currently-documented fossil record became extinct around 50,000 years ago (although there are a couple of intriguing aboriginal petroglyphs in existence that depict a mysterious beast very reminiscent of Thylacoleo but which are only around 6,500 years old, thereby indicating if identified correctly that this singular species did persist into relatively recent times).

Yet even if has survived right up to the present day undiscovered by science (and popularly proposed by cryptozoologists as the identity of an elusive feline cryptid known as the yarri or Queensland marsupial tiger), its morphology as deduced from fossil finds differs markedly from that of the creature in the photograph. 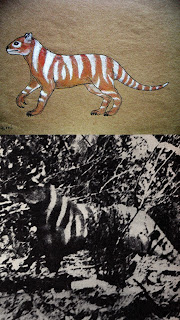 Specially prepared colour drawing of the yarri or Queensland tiger to which the reverse striping coat pattern ostensibly exhibited by the Ozenkadnook tiger has been deliberately applied, in order to show how the former cryptid might look if it were one and the same species as the latter cryptid, depicted below it (© Markus Bühler / copyright owner's identity presently ambiguous, it would seem - see below - although traditionally attributed to Rilla Martin)

Less contentious options on offer include a dingo or a domestic dog, whereas more sceptical views have leaned toward an unspecified hoax of some kind. With no consensus of opinion surfacing, the controversy as to what Martin's photo really depicts has rumbled on for over 50 years, but in a recent newspaper article (click here) a remarkable new allegation was made.

Namely, that the beast was nothing more than a large cardboard cut-out, created, painted with stripes, and then photographed in the bush by the father of one Bill Leak - a recently-deceased newspaper cartoonist – with a friend. Bill's father was apparently well known for his love of practical jokes, and the allegation was made in The Australian on 24 March 2017 by 'Jack the Insider', aka columnist Peter Hoysted, who had known Bill and had included this claim as part of a memorial article regarding him. 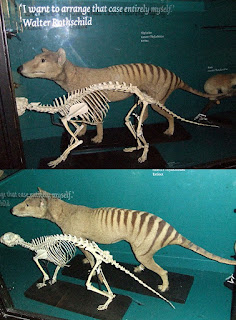 Supposedly, the hoax was only staged and the photo snapped as a joke to show some friends, but allegedly the photo somehow reached the media and soon attracted appreciable global attention, at which point Leak Snr became nervous that the truth would be exposed, so he destroyed the cut-out and told his son never to speak to anyone about it. Yet clearly he did, at least after his father's death, hence Hoysted's report following Bill's own death.

Various subsequent coverages have seized upon this 'confession by proxy' as proof that the Ozenkadnook Tiger photo is truly a hoax and should therefore be dismissed as being of any potential cryptozoological significance. However, in my opinion such an attitude overlooks two glaring and decidedly worrying shortcomings concerning Hoysted's recent revelation. 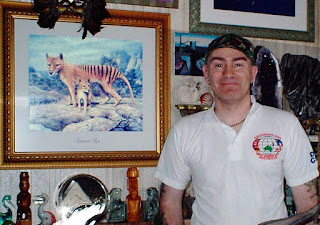 Alongside a thylacine picture in my study (© Dr Karl Shuker)

Firstly, the revelation is entirely anecdotal (and not even first-hand), as there seems to be no physical, tangible evidence substantiating it. True, in an update of 20 August 2010 to an article of his own concerning this perplexing picture that he had originally posted on his Tetrapod Zoology blog two days earlier (click here to read it),  British palaeontologist and cryptozoology chronicler Dr Darren Naish did point out an unidentified object in it that he interpreted as possibly being an artificial supporting structure, which if so would be consistent with the creature being merely a cardboard cut-out. But obviously this interpretation is merely a personal opinion, not a verified fact.

Sadly, however, opinions are all that can be offered regarding what may or may not be present in this photo because, very regrettably, the original negative was lost back in the mid-1960s when it was loaned to a newspaper. Consequently, there is no opportunity to subject it to the high-tech type of photographic analysis available nowadays. 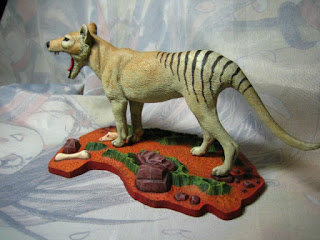 Secondly, Hoysted's revelation signally yet inexplicably fails to include any mention of Rilla Martin, the person who for the past five decades has been the name directly associated with the snapping of this photo, and who has even been interviewed by the media concerning it. Indeed, as noted by Darren in his 2010 article, although the photo is popularly known as the Ozenkadnook tiger photo it is even better known, at least by some, as the Rilla Martin photo, thus emphasising just how closely associated she is with it.

In a new Tetrapod Zoology article concerning the Ozenkadnook tiger photo, documenting Hoysted's newspaper article and posted online on 29 March 2017 (click here), Darren mentioned that he had personally asked Hoysted how Martin had become involved if it was actually Bill Leak's father who had snapped the photo, not her. In response, Hoysted had "surmised that Martin somehow agreed to take credit for the photo, but other details are as yet unclear". In short, this is just Hoysted's personal opinion, uncorroborated by any tangible evidence. 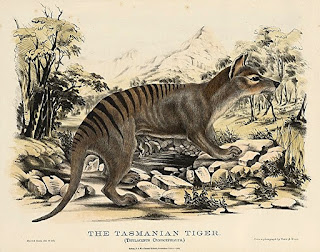 Consequently, until – if ever – these two fundamental flaws can be resolved, in my opinion this latest allegation regarding the enigmatic Ozenkadnook Tiger Photograph is unproven, and I for one shall continue to consider it as such. In situations of this kind, I always ask myself one simple question: if unsubstantiated claims like these were being put forward in support of a cryptid's status as a reality, rather than in support of a cryptid's status as a hoax, would they be so readily accepted by sceptics? And I think that we all know the answer to that question.

For more information regarding this Australian cryptid as well as related musings concerning putative surviving mainland thylacines and marsupial lions, be sure to check out my books Mystery Cats of the World, Cats of Magic, Mythology, and Mystery, and Still In Search Of Prehistoric Survivors.